Nick Foles Leads The Eagles To Another Victory 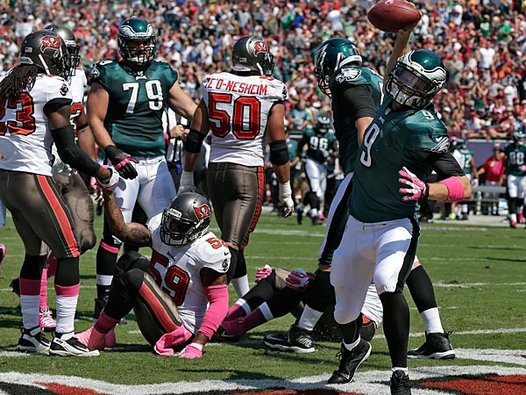 After listening to Chip Kelly answer some questions after the game, I think Michael Vick is going to remain the team’s starting quarterback, but anybody who has eyes to see and knows anything about football, will have to admit that Nick Foles played an outstanding game today.  He does a good job of seeing the entire field and getting the ball to a myriad of receivers.  It’s simple, if you get open, then Foles is going to throw you the football.  He completed passes to eight different receivers in the first half of the game.

He was very accurate with his deep throws, which is a definite improvement by Foles because he struggled throwing deep a year ago.

He hit DeSean Jackson on a crossing route in the end zone for another score.  It seemed like Buccaneers cornerback Derelle Revis and safety Mark Barron were on different pages on that play.   Jackson beat Revis inside and he seemed to be expecting Barron to be in there.  Whatever Foles read it and got to the ball to Jackson for the touchdown.

The Eagles are doing a better job of helping their receivers get open.  They were running screens early in the game, which is a good move if your other receivers are having trouble getting open.  Kelly and his staff are making adjustments to help his offense move the football.

The second Jackson touchdown was borrowed from Andy Reid because the former Eagles coach had Jackson run that same route for years.  I remember Kevin Kolb connected with Jackson on that route for a touchdown years ago during one of his better games.  The speedy receiver lines up in the slot on the right side of the field, then comes across the field on a diagonal and gets in back of the other safety who is focusing on the tight end on the left side, who is running a medium depth route.  Jackson winds up in basically a foot race with the other safety, who is deep on the right side in the two-deep coverage.

Defenses don’t jam enough any more.  The only way you can stop that route is to jam Jackson as he starts his release on the other side of the field.  If he gets into a foot race with the  safety, it’s no contest.  It’s good play design. Foles put the ball on the money.

I wouldn’t get too worked up by Riley Cooper’s day today.  He basically made two plays which gave him a big day.  On the touchdown, he pushed off on rookie cornerback Johnthan Banks.  I don’t blame him for doing it because that’s what he’s supposed to do. Usually they call offensive pass interference when you push a guy up top on his shoulder pads.  You’re supposed to push off below the waist, in the hip area.  Normally they call offensive pass interference when it’s so blatant.  Still you’ve got to give him credit for making the play.

On the other long play, I think his size and strength made the difference. Cooper caught the hitch route, then gave a move to Banks to avoid his tackle attempt.  After that move, he outran the pursuit for a while before he was caught some 40-yards downfield.

I saw LeSean McCoy staying after practice this past week and working on running routes out of the backfield and catching the football.  I expected them to try and throw the ball to him out of the backfield.  Going forward the Eagles need to use McCoy as a pass catching threat because he’s a good football player and capable of making big plays any time he touches the football.

Anytime Jackson is being doubled and they’re facing man-to-man coverage, McCoy has the best chance of getting open against the linebacker, who is covering him.

Foles took advantage of that matchup when he came in the game at the end of the first half in the Giants game.

The Eagles Now Have Themselves A Full-Scale Quarterback Controversy