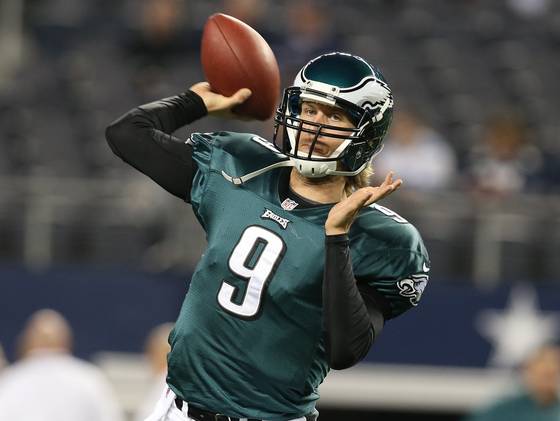 Nick Foles had a tremendous showing in his first start of the season, throwing for three touchdowns and rushing for another.

Foles began the game by taking the Eagles on an 8-play, 85-yard drive that ended with a touchdown run for the second-year quarterback.

In the second quarter, following a couple of Tampa Bay scores, Foles engineered an 8-play 54-yard drive that ended with a 12-yard touchdown pass to DeSean Jackson.

In the second half, Foles did his best to quiet some of the concerns about his arm strength, connecting with Riley Cooper for 47-yard touchdown to take a 21-17 lead, and then DeSean Jackson for a 38-yard touchdown.

Foles looked comfortable and poised throughout the game. His mistakes were minimal, and he never gave the Bucs a chance for a turnover. The former third-round pick did a great job getting a lot of his weapons involved, spreading the ball around to eight different receivers.

You couldn’t ask for a better showing from Nick Foles today. He ran Chip Kelly’s offense very well, almost to perfection. He was up against a quality defense today with a strong pass rush and a solid secondary, and he produced over 300 yards, four touchdowns, and a 133.3 quarterback rating.

Who Starts At Quarterback Next Week?

Let’s now address the top question on everyone’s mind. Who should start at quarterback next week if Michael Vick is ready to go?

There’s certainly a case to be made for both players. After the great showing by Foles today, a lot of people are going to want to go back to him, and understandably so.

Foles played a great game this week. The offense was incredibly efficient, especially in the redzone, where the Eagles have really struggled to produce with Michael Vick. After a game like today’s, how could you not want to see more?

However, you could make the case that the right thing to do is to go back to Michael Vick, if he’s healthy.

It would be one thing if Vick had been playing poorly through the first five weeks, but with the exception of the Kansas City game, he’s played pretty well. He’s kept his turnovers down, and while there are still some things he could improve upon, he hasn’t done anything to lose the job yet.

If Vick comes back and struggles, it would be easier for Kelly to justify pulling the plug on his veteran and going to his young quarterback as opposed to going with Foles, seeing him fall apart, and then being forced to turn back to Vick.

On the other hand however, look at the situation last year when Colin Kaepernick replaced Alex Smith.

Alex Smith didn’t play poorly by any means, but the coaching staff felt that Kaepernick was their future and that it was time to turn the page.

Michael Vick is not the future of this team. He’s played well this year, but at the end of the day…he’s a stopgap. Nick Foles may very well not be the future either. But he’s young, and has shown some upside. I’m not in love with him and his physical skills, but he’s got more of a chance to be this team’s future than Vick.

Its time to find out what you’ve got.

I think this was the best that the Eagles have looked all season.

Throughout the game, you had a number of different guys on both sides of the ball step up and make plays. Nick Foles was great today, but it was more than just him. A lot of his skill position support from LeSean McCoy, to DeSean Jackson, to Riley Cooper stepped up and made plays for him.

Defensively, while the Eagles still allowed rookie Mike Glennon to put up 20 points and throw for two touchdowns, they were opportunistic for the second straight week and made some plays in big moments such as the Fletcher interception or the Barwin sack.

Next week’s game against the Cowboys is a tremendous test for where this team is, and it could be very telling as far as how likely this team is to make the playoffs.

Nick Foles Leads The Eagles To Another Victory