Despite Record, Steve Mason Off to Solid Start for Flyers 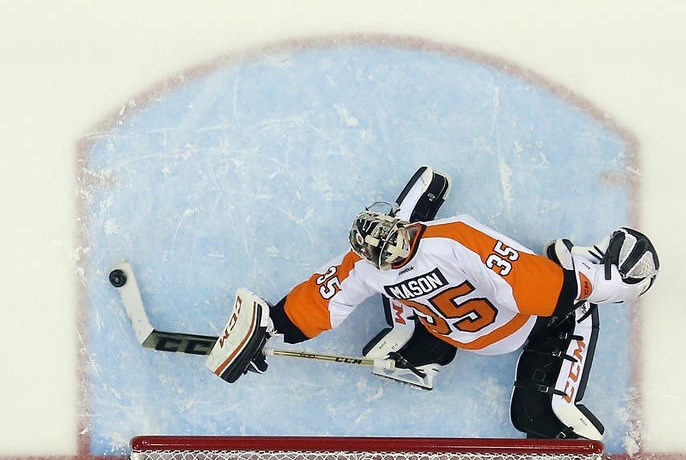 The 2013-14 NHL season previews for the Philadelphia Flyers seemed to have missed the part where the team looks disorganized and undisciplined on a nightly basis.

It also missed the part where Steve Mason would be the Flyers’ MVP nearly one month into the season.

Most previews questioned just how strong a tandem of Mason and Ray Emery would be for the Flyers. A number of the larger media outlets predicted Emery would win the job out of camp based on his experience and Mason’s unpredictability.

For all of the questions surrounding Mason’s optimistic bid for rejuvenating his career, I don’t know anyone that expected it to go this smoothly.

Mason currently ranks 6th in goals-against average and save percentage among NHL goaltenders with at least eight games played. Ignore any restrictions on games played and he ranks 15th overall.

If the offense wasn’t as anemic as it had been over the first ten games, Mason’s name may have come up more in water cooler discussions than it has of late. Even with a hat trick from Vincent Lecavalier against the New York Islanders on Saturday night, the Flyers still rank 28th in the league in goals per game (1.80).

Part of Mason’s recent success may have been a simple mental approach that goaltending coach Jeff Reese suggested to Mason early on in his Flyers’ tenure. Per Dave Isaac of the Courier-Post:

“Flyers goalie coach Jeff Reese instilled in him to take the game in segments divided by TV timeouts.

‘I find it’s more manageable that way,’ said Mason, who has been the best Flyer this year with a 2.02 goals-against average and .935 save percentage. ‘You have your seven minutes of focus and then you go to the bench and kind of get your drink and what not and focus after that.’ “

There are a number of goaltenders that would seem to be available via trade if the Flyers were so inclined, including Anaheim Ducks’ impending free agent Jonas Hiller. Goaltending has not, astonishingly, been the issue in Philadelphia, though.

For all of the criticism directed towards general manager Paul Holmgren (and yes, it is warranted) for the team’s lackluster start, give him credit for taking the gamble that Mason just needed a fresh start. It’s only one month into the season, and anything can happen between now and April to wash away all of the optimism surrounding the 25 year-old netminder, but the gamble has certainly been paying off in the short-term.