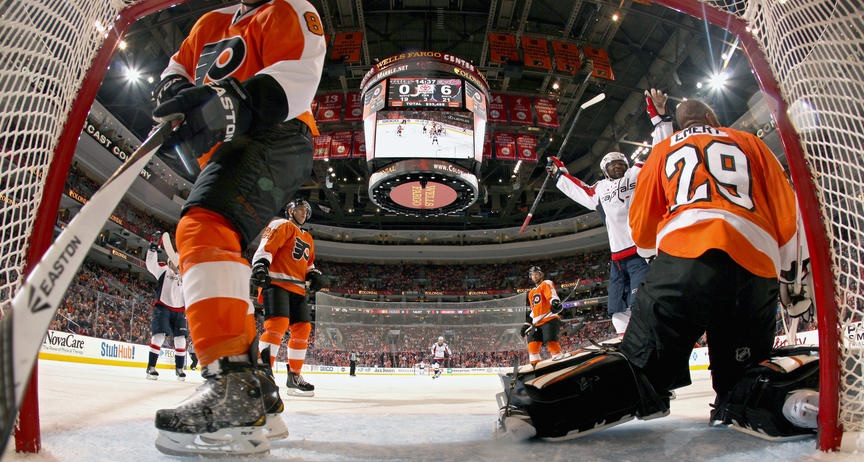 It hasn’t been easy defending the Philadelphia Flyers to this point. There have been glimmers of hope sprinkled through the month of October- 20 minutes here, a 2nd period there, where the team actually looked like they belong in the NHL.

On November 5, 2011, the new-look Flyers played the listless Columbus Blue Jackets at the Wells Fargo Center. The Jackets had lost Jeff Carter to injury and defenseman James Wisniewski to a six-game suspension. They entered the building with a 2-10-1 record.

The Flyers scored five goals in the first period, chasing then-Jackets goaltender Steve Mason out of the crease. They won the game by a 9-2 margin. The Jackets continued their descent to the bottom of the standings, ending the season with an abysmal 30th place finish.

This is where the Flyers are heading.

The team showed some early jump against the Washington Capitals on Friday evening, holding them to just one shot in fifteen minutes of game time. Four turnovers in the waning period resulted in the Capitals drawing first blood, though, and the team seemed to mentally forfeit immediately after.

Whatever individual talent exists on the roster, they are no longer working as a group. They aren’t the “comeback kids” from 2011 that come out slow but exhibit resilience. They’re just an embarrassing mess.

The most cringe-worthy incident occurred in the third period when, down 7-0, a line brawl broke out. Goaltender Ray Emery, playing in relief for Mason, skated to the other end of the ice and just started beating the sense out of the Caps’ goaltender, Brayden Holtby, who wanted nothing to do with him.

Emery, along with Vincent Lecavalier and Brayden Schenn, was given a game misconduct. Lecavalier and Schenn will likely skate away with, at worst, a fine. Emery, on the other hand, is facing a lengthy suspension.

The Flyers don’t have any time to reflect on this debacle, either. They get right back to the ice tomorrow in Newark to take on the New Jersey Devils.

Lecavalier will miss the game after losing teeth in his fight during the line brawl. Steve Downie will also not be available, as he was taken to a hospital after the game for post-concussion evaluation following a fight earlier in the game. Emery will probably be sitting the first of many games in the press box.

As a result, anywhere between one and three players could be earning a call-up from the Adirondack Phantoms tomorrow. The Phantoms, on a three-game winning streak, won tonight against the Binghamton Senators. Tye McGinn scored two goals in the game, so don’t be surprised if he is one of the call-ups.

The best one can hope for is that the infusion of youth needing to prove themselves will give this team more of a jump than they’ve shown to date. Beyond that, there isn’t much hope left to hold onto.

Is It More Beneficial For The Eagles To Lose?

Will The Real Nick Foles Please Stand Up?

Culture of winning my ass.

Good thing we had Downie to take one in the head for our boys in orange.

The Sixers are one win behind and may have a better record after 82 games.

Man, the Downie trade really put a spark in the right direction for this team, huh?
I have never seen, such a roster full of slow, untalented, skill-less, bunch of stiffs, in my entire life watching this team! They look completely lost, leadership-less, & looks like as if they’ve given up on the season already. JJ, I usually love your articles, but where have you seen “glimmers of hope sprinkled through the month of October”? They’ve been an atrocity, the entire year, except for the Islanders game where Vincent Lecavalier scored a hat trick. Minus tonight, the only positive has been Masons play. “Infusion of youth”???? What do you call Gioux, Raffl, Couturier, Rinaldo, The Schenns, Simmonds, Voracek, Gustaffson, & Mason??? All 25 years old & under, & they ain’t doing $#!t, & suck. Giroux & Voracek are invisible. The Schenns, & Simmonds, are non-talented sloths. Couturier, other than shutting down Malkin 2 years ago, WTF has he shown that he’s an NHL quality hockey player. He has ZERO offensive ability! Rinaldo is a talent-less wannabe goon. Raffl has shown promise, but doesn’t have enough experience yet. WHAT YOUTH INFUSION? The youth they have suck. The veterans they have are done. AND the entire DF is overpaid, horribly slow, & devoid of talent! Holmgren, needs to be FIRED today, & Snider the old coot, needs to sell the f^#@ing team! Enough is enough!

Before Friday, there were parts of games that showed promise. The first half of the game on Tuesday against the Ducks looked strong, as did the season opener against Toronto (when a handful of defensive lapses cost the game).

Having Tye McGinn or Jason Akeson isn’t going to magically make this a good team again. But I’d rather have younger players that are looking to stick in the NHL stay up here and work their butts off if guys on long-term contracts are just going to skate around lifeless.

Not to mention, the extreme lack of discipline, ineptness & stupidity, that runs rampant throughout the entire organization!

I have watched the this team for a while the problem is everyone is as DCar described. This organization does not know how to find talent. The new coach is clue less. Nobody on the team hustles. I hate to say it we went from bullies to “Milk and Cookies”. They don’t protect in front of the net, they don’t challenge the other team in their zone. It is crazy, Do like the Sixer’s gut the team including the coaches and find some real talent. It is from the ground up guys.

LOL, Steve Downie got rocked by Volpatti –
Vinny Lecavalier lost teeth by fighting a nobody in Oleksy. Who the hell is Oleksy I’ve never even heard of him before last night and the only guy on the flyers roster who can score has to fight him for Craig Berube.
I knew this would happen when they hired Craig Berube as head coach. A march to the IR because he is whispering in their ears about sending messages.
Sends out Simmonds to start a brawl ( Simmonds held his own against Wilson) and winds up getting Lecavalier beat up – and B Schenn lost his fight against Urbom too in the brawl.
Scott Hartnell pussed out last night – Washington called him out and Downie, Lecavalier, Schenn all got beat up because Hartnell’s lips were flapping faster than his teams fists.

I really don’t know why anyone should be surprised outside of the margins that they are losing by, this a bad Team with probably the least Talented Team from Top ago Bottom in all of the NHL who h I stated 2 months ago..
They have a First Year Coach who is learning on the Job,
They have a GM in Holmgrem who is hanging on for dear life to keep his Job and making 1 panick move, trade or signing after another with no master Plan on how to rebuild this once Proud Organization and then we have the Owner and Head of the a organization in Ed Snider who simply has become the “Al Davis” of Hockey eho continues to think and act like a GM Wanna-Be and surrounds himself with she’s men that feed into his Mafia wanna be persona that he enjoys so much to feed his ego.. When you put all this together, us there any real surprise that the Flyers have become one of the worst Organizations in The NHL.. The Flyers are losing their “Brand” quickly as one of the most desirable Franchises to play for, but with all this dysfunction,
The lack of planning and building for the Future and now their Front Office moves of panicking and not honoring Contracts by giving up on Players too quickly, many of tge Top Players do not want to play for Ed Snider any longer
Snider 2 years ago declares, “We will fix the Goalie situation” so they go out and get rid of Bobs and sign Bryz to a ridiculous Deal
Then last year Snider Claims “We will get a Top notch Defensemen” and GM Holmgrem panicks again basically giving up JVR, who will be a 35-40 Goals a Season Zplayer for the next 8-10 Years for Defensemen Schenn which was a steal for Toronto.. Bottom Line the root of the problem lies with Ed Snider who as he gets older has become more and more delusional and a shoot from the hip Owner for ing his lackeys to make poor decisions .
They Deserve everything that’s coming to them and in the end,
The Fan’s and the NHL as a whole suffers..

My Pre-Season Prediction of 32 Wins may have been overly optimistic..
They will struggle to achieve 30 Wins and stay out of the basement in the Standings..