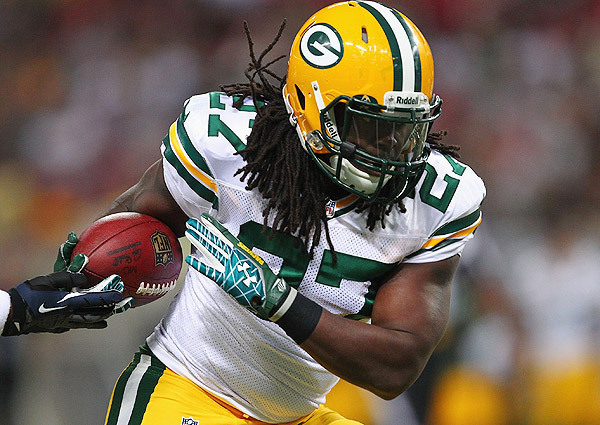 While Aaron Rodgers’ absence will certainly make a victory in Green Bay a much more realistic task, the Eagles defense is still going to have their hands full when they try to stop the running game of the Packers.

The Packers have been primarily a throwing team over the last few seasons, but in 2013 their running game has become a key element in their offense once again. Right now Green Bay is running well with their top two backs, Eddie Lacy and James Starks.

Lacy, a second-round pick from last spring’s draft, is a powerful physical runner who won’t be easy to bring down. He runs hard on every play, and isn’t afraid to take on contact. He reminds me a bit of former Dallas Cowboy running back Marion Barber, who was also a fierce physical runner who used to give the Eagles fits in his prime.

The Packers have given the ball to Lacy at least 22 times in each of the last five games, and the rookie has gained no fewer than 82 yards in each of those contests. He’s coming off of his best performance of the season, where he ran for 150 yards and a touchdown on Monday night.

With Rodgers out of the picture, the Packers are going to rely heavily on the impressive rookie and make him the focal point of their offense.

The Eagles’ defense needs to match Lacy’s powerful running style with some strong physical play of their own. Fletcher Cox, Cedric Thornton, and Bennie Logan need to be disruptive on the defensive line, and clog up as many running lanes as they can. Cox has been steadily improving over the last month, and is beginning to adapt to playing as a 3-4 defensive end. Thornton has been one of the team’s most consistent defensive players all season, and he needs to carry that success over to this week. Logan will make his second start of the season since taking over for Isaac Sopoaga. Trading Sopoaga in part signifies that the Eagles have confidence in how Logan has developed this year, and he needs to go out and prove the coaching staff right.

I’m not sure how much of Vinny Curry we’re going to see this week. The Eagles have said throughout the season that they don’t like Curry’s run defense, and in a game that they figure to see a heavy dose of the ground attack, it seems likely that Clifton Geathers will see more snaps in the rotation.

Another key is going to be inside linebacker DeMeco Ryans. Ryans has been rising up as a leader on this unit, and as the field general he’s got to make sure that his teammates are lined up properly and prepared for whatever blocking schemes/formations the Packers will try to throw at them.

As a unit, the defense needs to be aggressive and be prepared to spend 60 minutes playing some smash mouth football. If they can’t match the intensity that Lacy and the Green Bay running game will bring to the table, the Packers have a chance to win the time of possession battle and wear the defense down as the day goes on, and perhaps open things up for Seneca Wallace and the passing game.

Sixers Season Beginning Mirrors That Of The Eagles