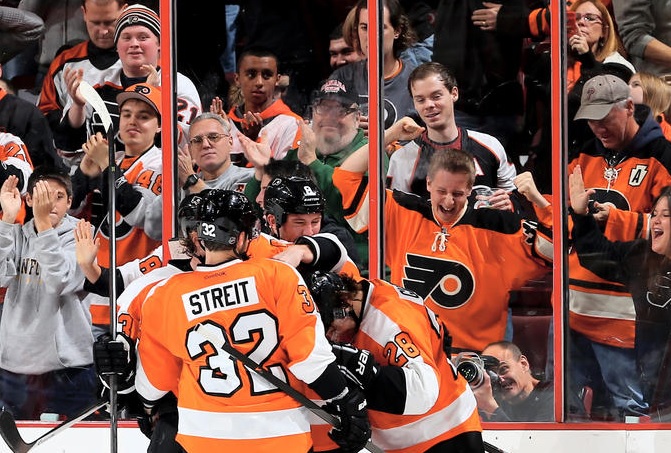 The Edmonton Oilers don’t make many appearances in Philadelphia. The newest collective bargaining agreement helps to remedy that by mandating that every team plays each other at least twice per season.

In spite of consecutive seasons spent in the NHL basement, the Oilers hold a 1-7-1 record over the Flyers in the eight games they’ve competed against each other since the 2001-02 season.

Heading into this afternoon’s matinee game between the two clubs, the NHL’s worst offense was facing the NHL’s worst defense. Something had to give, and fortunately for Philadelphia, the Flyers were able to add another much needed win to their record.

The Oilers held the advantage in the early goings, outshooting the Flyers 7-2, but the Flyers played a solid team defensive game to hold them off.

At the 11:56 mark, enforcer Jay Rosehill surprised many in the stands by redirecting a crisp pass from Mark Streit past goaltender Devan Dubnyk. It was a beautiful goal and just the fourth of his NHL career.

Rosehill couldn’t let that be his only “contribution,” though, and made sure to add unnecessary roughing and fighting penalties later in the game. His “dancing partner,” Oilers defenseman Luke Gazdic, left the game after the fight with an injured shoulder.

“Rosy did a great job,” head coach Craig Berube bemused after the game. “Scored a goal and had a big fight. Rosy’s done everything we’ve asked him.”

Streit earned a second assist minutes later, setting up the one-timer for Scott Hartnell. It was Hartnell’s second goal of the season.

The Flyers carried the lead though the end of the first period and late into the second. Unfortunately for goaltender Steve Mason, Adam Hall was called for hooking and forward Michael Raffl became greedy during the ensuing penalty kill.

The third period has arguably been the Flyers’ Achille’s heel this season. They had been outscored 16-6 heading into the final 20 minutes and with just a one goal cushion, there was every reason to believe the team could collapse again before the final buzzer.

The Flyers didn’t wilt, though. They earned some “luck” when Oilers defenseman Anton Belov received a match penalty for “contact to the head.” It was a questionable call by the officials and was eventually evened up with a make-up call, but it helped the Flyers sustain offensive pressure.

Finally, at the 11:26 mark of the third, Claude Giroux scored his first goal of the season.

“Anybody, if you don’t score for awhile, even me when I played, you get a goal… after forty games… you feel pretty good,” said Berube to reporters.

“That soon?” asked one reported.

“His effort’s been great, I think. He’s worked hard most games and he’s come to play. He had some good opportunities and it finally went in, so I’m happy for him, but G’s happy we won the game. That’s what’s important.”

The two goal lead was cut short less than two minutes later by Oilers forward Taylor Hall. Once again, though, an Oilers penalty (boarding by Sam Gagner) put the Flyers back into the driver’s seat. Twelve seconds after the powerplay expired, Brayden Schenn patiently waited behind the net before he could get a good pass to Vinny Lecavalier. Lecavalier, from a sharp angle at the side of the net, beat Dubnyk and scored the final goal of the game.

Realistically, this win doesn’t change anything. Both teams had terrible records entering the game and only one could leave with two points. It was a fun game to watch, but unless the team can successfully build off of it and improve their overall performance, it won’t make a difference in the long run.

At the very least, the way that Ales Hemsky played today should help discourage the Flyers organizing from moving any players to acquire his services (as per earlier rumors).

The Flyers’ next game is Tuesday night against the Ottawa Senators. It marks the first game of a three game road trip over four days.

The Curse Of Tuesday Night Football

that was no penalty committed against Giroux by Belov, that was a clean hit and certainly not worthy of a 5 minute major. Giroux scored on that penalty during 4 on 4, took the monkey off his back but I believe it was a bad call.
Couturier almost scored his first goal of the year on a open net last second shot.