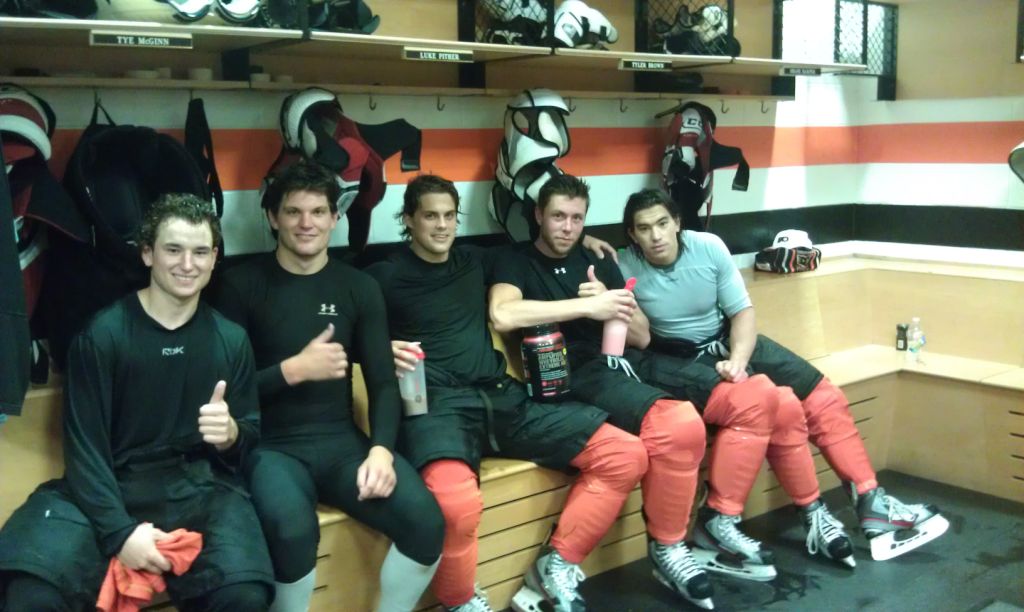 There isn’t much to look forward to these days when the Philadelphia Flyers take to the ice.

Without an improved defense, it’s unrealistic to expect the outcomes of each game at the Wells Fargo Center to regularly be favorable for the home team.

In a bit of a surprise role reversal, though, the Flyers’ AHL farm team- the Adirondack Phantoms- have been a stronger team in the early 2013-14 AHL season than in recent years.

Eighth place after one month isn’t remarkable, but the team is on a five-game winning streak following a 3-0 shutout win tonight on Friday evening against the Springfield Falcons (Columbus Blue Jackets’ AHL affiliate).

One of the issues that plagued the Phantoms over the last few years was that the lack of top end talent on the team carried into the lack of camaraderie and resiliency up-and-down the line-up.

When a three-game losing streak would become six, the atmosphere among the players would turn toxic and the on-ice product would, as the expression goes, “… roll downhill.”

In October of 2010, prospect Pat Maroon was shipped out to the Anaheim Ducks after a heated incident with head coach Greg Gilbert in the locker room.

In January 2011, defenseman prospect Joonas Lehtivuori made it public that, “There was just completely nothing there [in Glens Falls]… I could barely get the internet working. It’s a really small place and the arena is just this old building of bricks.” He and the Flyers eventually agreed to a mutual buyout.

Last February, the players had a players-only meeting regarding their poor record.

“(The meeting was about) just concentrating on going out and playing rather than worrying about our system or who is playing or who am I playing with or why am I not playing or why am I not called up,” defenseman Danny Syvret said. “It was just sort of a meeting like you either want to be here, play here and win or if not, call your agent and tell him to get you the (expletive deleted) out of here. We just want guys who want to work.”  Promising young winger Matt Ford was shipped out a month later for “future considerations.”

Syvret was traded in the offseason for forward Kris Newbury.

The attitude among the players appears to be much healthier this season. Another factor that could be improving the situation is the increased number of call-ups over the last few seasons.

For players like Tye McGinn, Oliver Lauridsen, Jason Akeson, and Brandon Manning (among others), they have had an opportunity to showcase their skills at the NHL level and are competing to earn another shot at staying there.

The Phantoms rank 8th without having any marquis names on the roster. Nick Cousins and Akeson are currently tied for first place on the team with 8 points each, but Cousins ranks 90th among all AHL players in points (with goal quantities weighing more for equal point totals). There is talent there, but it’s young, inexperienced and still maturing.

McGinn currently has three goals in seven games played for the Phantoms; no assists. He had a fourth goal last week that was later credited to Cousins.

McGinn can still improve his overall game, but he’s proven at the AHL level that he has good finishing abilities and understands his role as a net-hounding power forward. The Flyers elected to send him back to the AHL recently instead of using him as a fourth line forward with limited minutes, which does make some sense. If the organization elects to move Wayne Simmonds as per recent rumors, McGinn may be able to fill Simmond’s role at least temporarily.

The Flyers may ultimately end up competing for 30th place when the 2013-14 NHL season ends, but unlike previous years, Phantoms prospects may actually play a part in the eventual rebirth (we hope) of the Flyers in Philadelphia.