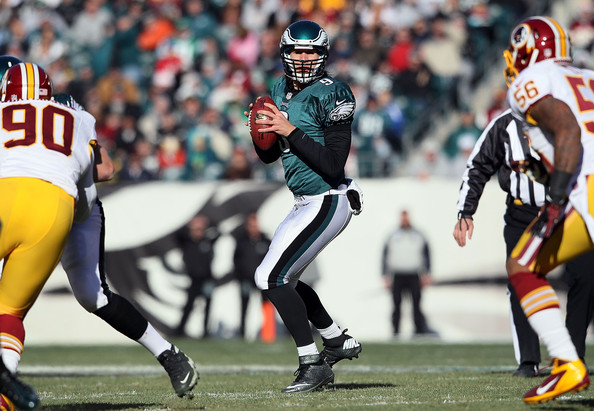 Eagles Hang On For Home Win

First they made it look easy. Then, not so much.

Through three quarters, the Eagles dominated the Redskins. They built up a 24-0 lead, their offense was moving the ball efficiently, and the defense was doing a beautiful job holding the Washington offense in check.

Then in the fourth quarter, the wheels began to fall off. The Redskins scored two touchdowns on a couple of busted coverages, and and followed them up with a pair of two-point conversions to make it a one-score game.

The Eagles offense was unable to close out the game, and gave the Redskins one final opportunity to tie the game. Washington got into Eagle territory, but ultimately were unable to get it done, with a terrible pass from Robert Griffin III picked off by Brandon Boykin in the endzone.

It might not have finished pretty, but the Eagles have finally proven that they can win a home game.

Billy Davis’ defense put out another great effort this afternoon.

The defense kept Washington scoreless in the first half. They held Robert Griffin to just 26 passing yards through two quarters.

Even though the group gave up 16 points in the fourth quarter, they were able to tighten up in the final moments of the game, and Brandon Boykin’s interception sealed another victory.

This is another explosive offense that Davis and his defense have held in check. And they did it on a day where they were missing three starters, and were forced to go with Najee Goode, Roc Carmichael,  a combination of Patrick Chung/Kurt Coleman to make up for the absences of Bradley Fletcher, Mychal Kendricks, and Earl Wolff.

The unit is playing some great ball right now, and they’re improving and growing more confident with every game.

Foles finished with 298 yards, and also added 47 rushing yards on nine carries and a touchdown.

It was a nifty move by Foles on a touchdown run in the redzone. Foles ran a read-option play, kept the ball himself, spun through a defender and into the endzone.

Foles put great touch on a pass to LeSean McCoy that went for 49-yards. He made some great throws, and connected with seven different wideouts. He had seven passes that went for 19 yards or more.

I thought Foles tried to run a little too much today. Foles isn’t a quarterback that needs to be taking nine carries a game. We saw the best and worst of his running abilities today.

In order for him to be effective as a runner, he’s got to use his legs sparingly. If he does it too much, you’re going to see situations like today where his lack of explosive speed is going to cause him to come up a yard or two short of what he needs for the first down.

All in all, another good showing for the young passer.

I have to single out Connor Barwin for an absolutely outstanding defensive performance today.

Barwin was a one-man wrecking crew today. He made a number of impact plays in the first half alone.

Barwin had another batted ball today, knocking a pass down on third down on the first Washington drive. Barwin has done a great job getting his hands up and knocking own passes at the line this year. As a rusher, if you can’t always get to the quarterback, you can still make an impact by knowing when to get your hands up and bat down a ball. Barwin has been doing that all year.

Barwin was stout against the run as well. He helped make several stops in the running game, and the former Texan later had a nice open-field tackle on Leonard Hankerson.

Barwin’s biggest play of the game came when he forced a fumble from Griffin the redzone in the second quarter, which was recovered by Fletcher Cox. It was a game-changing turnover for the veteran linebacker.

It was a banner day for the Eagles.

They put the 10-game home losing streak to rest. They got their record above .500 for the first time since they were 1-0. They moved into sole possession of first place in the NFC East. They completed a season-sweep of the Washington Redskins, and at 3-7, they’ve effectively buried a division rival in the standings.

The Eagles are in the driver’s seat. With two more home games on the horizon, they’ve got a chance to really pick up some momentum and separate themselves from the rest of the division in the coming weeks.