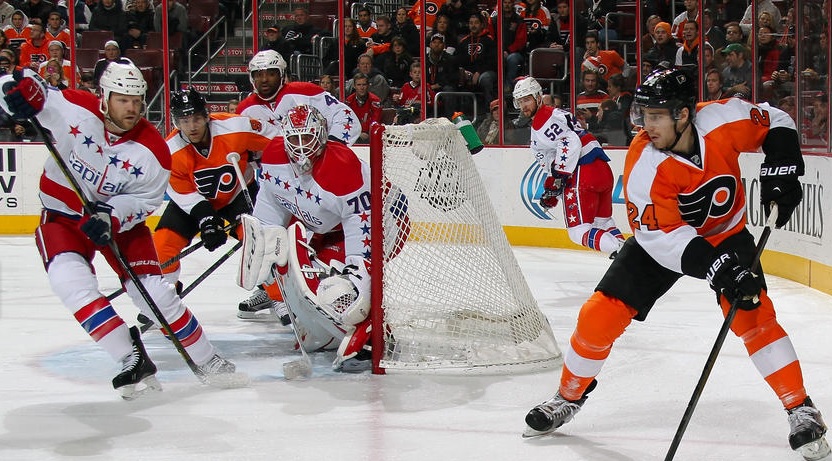 The Philadelphia Flyers’ third period collapse against the Washington Capitals on Sunday night was of particular disappointment because of the three goal lead they had built early in the third period.

A chance for redemption came quickly with the second half of a home-and-home series drawing on Tuesday night, and the Flyers prevailed, holding up a three goal lead in the third period to beat the Caps 5-2.

Dave Strehle of The Fourth Period quoted Matt Read after the game: “We talked about that on the bench, about not letting that happen again.”

The first period followed similarly to previous outings this season- back-and-forth play between both teams with limited chances. Alex Ovechkin, two goals away from 400 in his young career, was held to zero shots by the Flyers’ third line.

A high-sticking penalty from Kimmo Timonen (sold with a bit of embellishment from “Ovi”) carried over into the beginning of the second period, and #8 was able to capitalize with a soft backhand under goaltender Steve Mason’s pads.

The Flyers that dropped a 7-0 loss earlier in the season would have wilted under that type of goal, but thankfully the players seem to have at least gotten past confidence issues.

Less than a minute later, Braydon Coburn outletted a pass from the Flyers’ end to a speeding Jake Voracek with Michael Raffl en tow. Voracek made the rare decision to not pass first and beat goaltender Braden Holtby at the far corner.

Caps forward Eric Fehr grabbed the lead again after Erik Gustafsson and Claude Giroux both failed to pick him up heading to an open slot in front of the net. It’s difficult to tell if it was a communication error or laziness, but it was a miscue that could have easily been avoided.

Matt Read forced a tie by corralling a pinballing puck that was shot by Nicklas Grossmann and then bounced between Steve Downie and Read. It was Read’s 10th goal of the season, putting him in the lead on the Flyers in goals (just ahead of the injured Vinny Lecavalier, who probably would have been further ahead otherwise).

The game, otherwise entertaining and compelling, turned ugly at the 15:15 mark of the second period.

Brayden Schenn, holding the puck in the Flyers’ end behind the goal line, was thrown violently into the boards by rookie Tom Wilson. In Wilson’s “defense,” Schenn may have seen him coming and turned slightly at the last second. There is some argument for players being aware of where they are on the ice.

Wilson, however, skated full speed from the blue line to make that hit. At it’s least egregious, it was charging, and at worst, a blatant intent to take him out of the game. Wilson is 6′-4″ and 220 lbs; whether Schenn saw him coming or not, he was being thrown into the boards recklessly regardless.

Capitals head coach Adam Oates told reporters, “To me, it’s a clean hit. I don’t even think it’s a penalty.” Their general manager, George McPhee, called it a “great hit.” There is sticking up for your player and then there is being delusional, and I don’t think it takes much convincing to figure out where these two fall on the issue.

Wilson received a game misconduct for the incident and the Flyers’ received a five minute powerplay in return. The powerplay proved to be the difference, with Mark Streit and Voracek adding two markers to the scoreboard heading into the third period. Streit’s goal may have actually redirected off of recent signing Chris VandeVelde, but he has yet

Head coach Craig Berube argued after Sunday’s loss that the team played “not to lose” in the third period, trying to hold onto the lead rather than continue playing. The Flyers were much better prepared in that regard, even with the shortened bench.

Wayne Simmonds added the insurance marker after getting the puck between defenseman John Carlson’s legs, racing past him and beating Braden Holtby with an essentially open net. It was Simmonds’ first goal in ten games.

Holtby, who was the beneficiary of the shutout in the 7-0 blowout, finished with 30 saves on 35 shots. Mason kept the game under control as well, stopping 24 of 26 shots.

The Flyers begin another home-and-home series on Thursday with the Columbus Blue Jackets. I doubt Brayden Schenn will be available to play, even if it’s just for precautionary reasons. The Flyers could shift VandeVelde to second line center if they don’t want to move Matt Read up one line, or potentially call up another player from the Adirondack Phantoms.

The Flyers are now fourth in the Metropolitan Division and ninth in the Eastern Conference.

How Will The Eagles Bounce Back This Week?