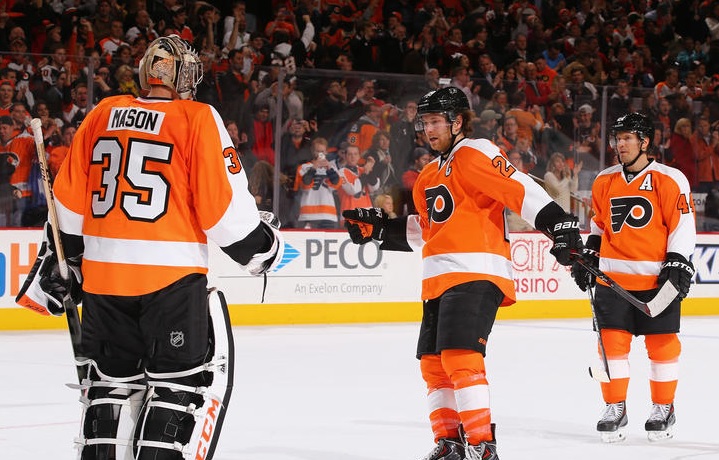 The last time that the Columbus Blue Jackets appeared in Philadelphia, goaltender Steve Mason was pulled from the game after allowing 7 goals on 28 shots. Mason was ‘tending for the Jackets in what would ultimately be a 9-2 drubbing from the Flyers, who finished second in the NHL that season in goals-per-game.

Mason’s record was 2-10-0 before that game and didn’t get much better after.

Fast forward two seasons and Columbus remains a struggling team in the Eastern Conference while Mason minds the net for the Flyers. The Flyers, however, have been neck-and-neck with them in the standings.

In stark contrast to what many may have expected (myself included) in the preseason, Mason is not at fault for any of the Flyers’ woes. On the contrary- his 0.924 save percentage and 2.34 goals-against-average have been their saving grace in a season barely meeting expectations.

In many ways, this game was about redemption for Mason and proving that all those down years in Ohio weren’t all on him. It marvelously played out that way too, as a 3-0 hole after two periods was overcome with a dramatic 5-4 regulation finish for the Flyers.

The Flyers controlled play early, outshooting the Jackets 10-1 with 8:00 or so remaining in the first period. Journeyman goaltender Curtis McElhinney, filling in for Sergei Bobrovsky while he remains out indefinitely with a groin injury, weathered an early shelling through a porous defense.

The Flyers could have pounced on the scoreboard early in the period if they took advantage of the two powerplays they were able to draw. With four seconds remaining on the second penalty, though, Jake Voracek bobbled the puck at the point and forward Cam Atkinson was off to the races. Braydon Coburn cut off the pass on the ensuing two-on-one rush, but Atkinson still had plenty of room to shoot on and beat Mason.

The Blue Jackets began evening up the scoring chances in the second period, but the game was still open for either team to capitalize.

Unfortunately, a terrible shift from the fourth line less than five minutes in resulted in a three-on-two that quickly became a 3-on-1 thanks to a poorly timed line change from the defense. Once again, Mason was unable to come up with the save, but it was a position his teammates never should have put him in.

“The second goal was a line change, kind of a mixed up play and [they] ended up getting a two-on-one and going down and scoring,” spoke head coach Craig Berube. “I don’t know what’s going on in our heads, but we didn’t play our game after that for the rest of the period. Got outworked and got outshot, but they responded in the third period and played the right way.”

Nick Foligno scored what, one month ago, would have probably been the eventual game winner with 7.5 seconds left in the second period.

Give credit where credit is due to this team, though. Rather than slump at the uphill climb ahead of them, they battled back in the third period and cut the lead to 3-2 early on with goals from Voracek and Coburn.

Blake Comeau added a fourth goal for the Blue Jackets following a turnover behind the Flyers’ net as Artem Anisimov pressured Scott Hartnell at the boards, won the battle and dished the puck to the open Comeau. For a fragile team, this could have been the dagger in the back.

A delayed penalty against the Blue Jackets began an amazing comeback in the final six minutes of the game. Mason skated to the bench to bring on the extra attacker. Defenseman Mark Streit nearly lost the puck after standing still in the defensive end, but was able to pass it out of harm’s way at the last moment.

Defenseman Erik Gustafsson joined the ensuing offensive rush with Claude Giroux (the extra attacker) and Hartnell, skating up just to the left of the crease and scoring on an essentially open net.

The Blue Jackets never seemed to recover after that goal, or maybe it was just the Flyers feeding on the energy from the crowd and the realization that they could steal this game away. With the score so close, Berube called for the top line every other shift to close out the game, and they delivered.

Less than a minute after Gustafsson’s goal, Voracek skated up the right wing while Michael Raffl headed to the net and Giroux followed behind. Raffl ended up bottling up the lone defenseman in front as Voracek shot and hit the post. Giroux, as the trailer, banged home the loose puck to tie.

Finally, with 1:38 remaining in regulation, Giroux found himself with the puck on his stick while he was skating away from the net. Without even looking, he backhanded the puck behind himself and somehow hit twine. This was a goal for the ages, and fittingly the 100th goal of his NHL career.

“He’s really skating and working and going the right way- north,” said Berube. “His whole line is. They’re all working together well. Jake’s skating really well, attacking with speed, and Raffl’s a real good complement right now. He has real good puck possession out there, hangs onto the puck, controls the puck, and big guy, physical. He’s got good hands, makes plays… goes to the net.”

Dave Strehle of The Fourth Period reported after the game that Steve Mason told reporters he went around the locker room after the game, thanking his teammates for the win. Giroux apparently told him, “He doesn’t have to win every game for the team.”

This wasn’t the first public recognition of their mutal admiration and respect for each other, but it’s a positive turn of events that the captain and goalie are supporting each other considering how “well” Ilya Bryzgalov fit in last season. The Flyers’ locker room is in good spirits and the team can only benefit from that.

The underlying puck-moving problems on defense, along with frequent mental lapses leading to turnovers, still remain. Berube acknowledged it as much with his “I don’t know what’s going on in our heads” remark. Many of the early season issues, though- goal scoring and lack of resiliency under pressure- appear to be falling by the wayside. The team has scored 32 goals in their last 10 games and have been competitive against many of their opponents (excluding the disaster in Chicago) even when they were down on the scoreboard.

Does this team have what it takes to remain in playoff contention for more than a day? There is plenty of hockey left on the schedule to suggest it can go either way, but for what it’s worth, this was a fantastic showcase of what they are capable of if they fight through their mistakes.

Eagles Should Hope For Carolina To Win Out