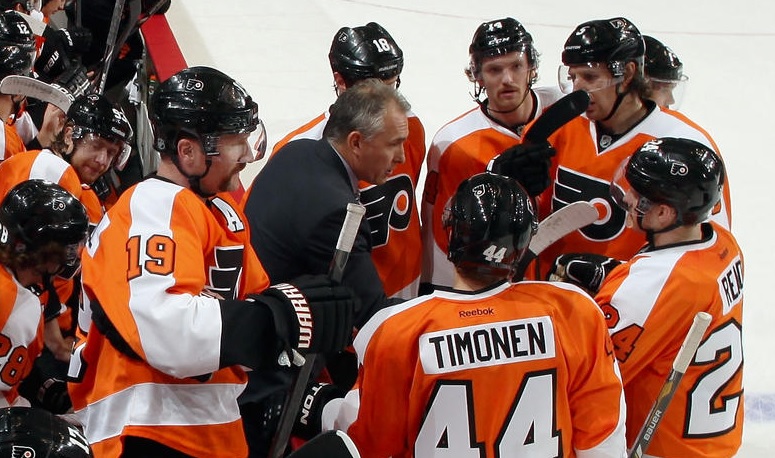 The “FIRE HOLMGREN” chants that echoed in the Wells Fargo Center on the first of November seem but a distant memory.

Nine consecutive wins on home ice will do that for paying customers.

The Philadelphia Flyers haven’t bloomed into a true contender yet, but the wheels have returned to the track. Craig Berube deserves as much credit for that success as the players.

The team’s record under Berube is 18-13-4, with a slightly better-than-average 5-3-2 record in their last ten games.

Before I began this post, I personally likened Berube’s coaching to Darryl Sutter’s of the Los Angeles Kings. When Sutter took over for Terry Murray in 2011, he didn’t reinvent how hockey was played with any revolutionary system or tactics. He simply loosened the players up and improved on the mental and physical preparation necessary for the team to perform on a nightly basis.

Per Kevin McGran of the Toronto Star in March 2012:

It turns out that this comparison may not be that far off. Tim Panaccio of CSNPhilly spoke with Berube before his first game as head coach and he named Sutter as his inspiration.

“Yet there is one coach who Berube says opened his eyes. One coach whose style, he felt, was something to emulate behind the bench: Darryl Sutter.

Berube: ‘He was a pretty interesting guy. Tough approach to the game, but he wasn’t a yeller or screamer on the bench. He demanded the respect. He demanded you to play hard, compete every shift and be aggressive… I enjoyed playing for him. I wish that I had played for him when I was younger because I would have given everything I had for him.’ “

The most dramatic difference in the Flyers since November 1 is that the confidence and resiliency that was lacking in the first month of the season now permeates the roster. The team doesn’t stop skating and hang their heads when down two or three goals.

When the Edmonton Oilers jumped out to an early 2-0 lead last night thanks to two face-palming turnovers, the Flyers responded with two powerplay goals in the second period to tie. When the Oilers grabbed the lead again in the third period, the Flyers tied with yet another powerplay goal with less than five minutes remaining.

Just ask the Ottawa Senators, currently in 10th place and plummeting, how important confidence and “not quitting” is at this point of the season.

For all of the improvements that Berube has made in off-ice preparedness, there is only so much that he can do to correct on-ice defensive gaffes and turnovers. It’s now general manager Paul Holmgren’s turn to address the unevenness in talent at the blue line.

There are twenty four games and the Winter Olympics between now and the NHL trade deadline (March 5). The Flyers have two stretches of difficult (on paper) games to get through- their current road trip in the Western Conference and another round of home-and-home games with Western Conference opponents at the end of January.

It’s difficult to gauge how expendable a player is in the middle of the season when injuries begin to pile up. The Flyers have been fairly lucky in that regard, with just minor injuries to Vinnie Lecavalier, Steve Downie and Erik Gustafsson affecting the roster over the last month.

The Flyers also sit third in the Metropolitan Division and eighth in the Eastern Conference. The difference between fifth place and thirteen is but ten points, so there is plenty of time for the team to rise or fall in both directions.

This line-up, even if it sneaks into the post-season, won’t go far without an improvement on defense, though.

As long as the Flyers continue grinding out enough wins to hold onto a playoff spot, Holmgren has some time before pulling the trigger on a  roster-shaking deal.

Berube’s lived up to his responsibilities- it’s now up to Holmgren to provide him with the players he needs to truly contend.

Like I Expected, The Cowboys Are Featuring DeMarco Murray