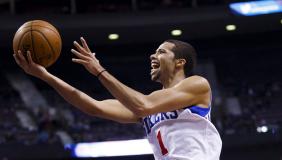 The Philadelphia 76ers lost their second straight game on Saturday night, falling to the Suns 115-101. Their record drops to 8-21.

The Sixers were off for a week…didn’t you miss them?

I’ve spoken before about how the lack of depth on this team’s bench is what is going to assure them one of the worst records in the league, and tonight was another prime example of that.

Outside of Tony Wroten, the Sixers have no one they can count on to give them any kind of energy or offensive punch off of the bench.

Once in awhile, maybe LaVoy Allen or James Anderson will randomly decide to go off and have a nice game here or there. But more often than not, you’re going to see games like tonight’s where the bench is just black hole, devoid of any productive basketball.

James Anderson, LaVoy Allen, Daniel Orton, and Brandon Davies combined for just six points. Between the four of them, they were on the court for 50 minutes. And not one of them besides Anderson could put the ball in the net even once. Add in the production of Elliot Williams, who was taken off of the bench and placed into the starting lineup to cover for Turner’s absence, and you’ve got six points in 76 minutes.

Andrew Bynum Has Worn Out His Welcome In Cleveland