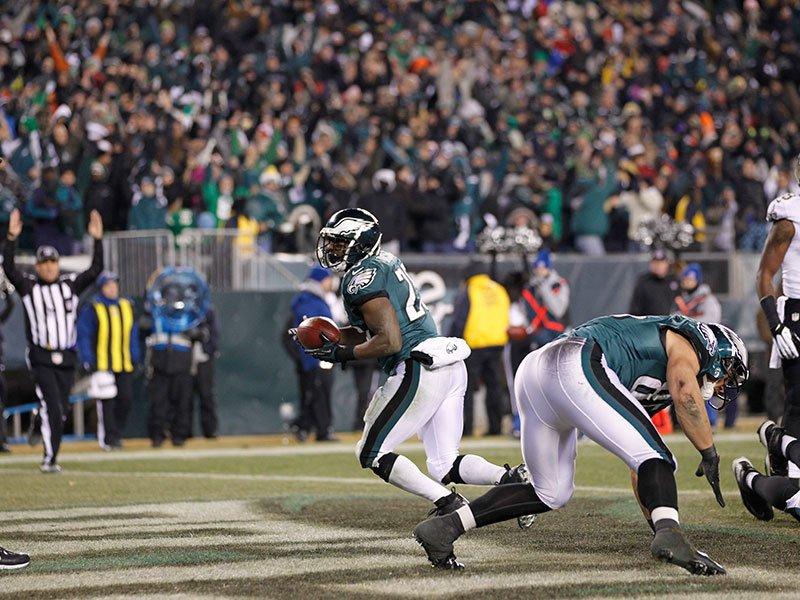 The New Orleans Saints traveled to a frigid Lincoln Financial Field Saturday night to face off against the Philadelphia Eagles. The stadium was filled with fans that sold out their team’s tickets in just three minutes and whose hopes were flying as high as their Eagles were for the final eight games of the season.

One of the primary causes of the Eagles high-flying hopes for their NFC East Champions was the running back who led the team all year. LeSean McCoy put together a historical season that broke franchise records and took home numerous awards including the NFL rushing title, December Player of the Month honors, and an All-Pro nod for the second time in his young career. However, when it came to the most important game of the year, McCoy met a defense that was well-prepare for him.

It was clear from the start that the main focus of the Saints defense was to shut down Shady. With just 32 yards on 10 carries in the first half, their job was done with perfection.

In the first quarter of what was a scoreless game, the Eagles faced a 4th-and-1 from the Saints 23-yard line.  Chip “The High Stakes Gambler” chose to go for the conversion and called on the ever-reliable McCoy. The NFL’s leading rusher took the handoff behind his right tackle and gained 8 yards for an easy conversion. The drive then turned sour as a screen intended for tight end Brent Celek was blown up and Nick Foles was sacked. The drive resulted in a 48-yard field goal attempt that was missed by Alex Henery. The three-point try ended up being the difference in a 26-24 Eagles loss, but that is a discussion for another day.

The first quarter was not the only appearance Shady made on fourth down. In a drive that followed a Mark Ingram touchdown run and a mocking of the “Shady Bounce” that McCoy celebrates with after most of his touchdowns, McCoy took the reins and got his team into the endzone. The drive began with an 11-yard dart by McCoy that set the tempo for the drive.

Later, while in the redzone, Shady made one of his signature cuts that provoked the name Barry Sanders from the mouths of Cris Collinsworth and Al Michaels as he left a defender stumbling with arms full of air on his way to the two-yard-line. Again, the former Pitt Panther was called upon on 4th-and-Goal from the one-and-a-half yard line. Behind fellow All-Pro Evan Mathis, McCoy and the offensive line made a strong push to get into the endzone. The touchdown put the Eagles within one possession of the Saints lead. Striking distance.

With McCoy suddenly running angrily, a mixture of an opponent mocking him and his team losing for the third time in three career playoff appearances, the Saints again focused their efforts into shutting him down. It was apparent on the 4th quarter touchdown from Nick Foles to tight end Zach Ertz. The ball was faked to McCoy and the entire Saints defense shifted to the direction in which he was running. Ertz then broke out in the opposite direction and the Saints defense was playing catch-up as he caught the 3-yard touchdown with ease and the Eagles took a 24-23 lead. Even without the ball in his hands, McCoy was a factor.

LeSean McCoy finished his day with 25 touches for just 92 total yards. His 77 yards on the ground was tied for his third lowest output over the final eight weeks of the season and his 3.7 yards-per-carry average was tied for his lowest over that same span. His 92 total yards of offense was his lowest since November 3rd when Nick Foles put on an aerial assault on the Oakland Raiders.

The Saints had clear intentions of who they planned on shutting down in the Wild Card Round of the playoffs. LeSean McCoy was their number one target and they effectively shut down the running back. Chip Kelly never strayed from the gameplan and continued to feed the beast that feasts in the fourth quarter. However, Shady never got that breakout run that always seems to come late in games.

McCoy put together one of the most memorable, if not the most memorable, seasons by an Eagles running back. In just the first year of Chip Kelly’s revolutionary offense, the Eagles broke multiple franchise records from total yards to total points to the individual records for scrimmage yards and rushing yards by LeSean McCoy. The sky is the limit for this team and at just 25 years old, there is no cap on what the man who can cut on a dime can and will do.

With many already looking towards next season, keep the number 1,066 in the back of your mind. That number is the amount of yards that LeSean McCoy needs to become the Eagles all-time leading rusher.

The Saints Bullied The Eagles On The Line Of Scrimmage

Changes The Eagles Need To Make