Notes From The Phillies’ 1-0 Win Over Atlanta 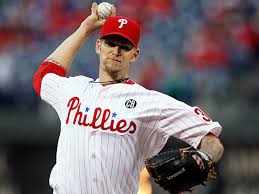 The Philadelphia Phillies snapped their two-game losing streak on Thursday afternoon, taking down the Braves 1-0. Their record improves to 7-8.

While it was good that the Phillies were able to salvage a game from this series, its still pretty disturbing that they’ve been only able to manufacture one lousy run over their last two games.

Atlanta didn’t even need to go into their bullpen after the first game in this series, and Ryne Sandberg has already begun to lose confidence in Ryan Howard, as he’s now sitting the first baseman against lefties.

A.J. Burnett did a great job pitching through his hernia today, but I don’t know how often he’ll be able to pull off performances like this. Playing through injuries like this rarely work out for an athlete, especially ones like pitchers. He may be alright today, and he may make it through the next week or even month with the injury, but as long he keeps playing through it, he’s going to continue to aggravate it.

Especially since this injury comes so early in the year, its only a matter of time before the veteran is going to have be shut down to get it taken care of.

Sooner or later, this injury is going to become a lot worse and really take a toll on Burnett’s production.

Notes From The Phillies’ 1-0 Loss To Atlanta

Penalties, Lack of Offense Stifle Flyers in Game One Loss

If I was Ryan Sandberg, here’s what I would tell the team, and. I would only say it once: ‘You MFs: Our pitcher throws 7 SHUTOUT innings and you can’t score a fucking run! Get it the fuck together!’

Without the 9th inning meltdown Tuesday, the Phillies would have won 2 out of 3 from the 2nd best team in the NL – just an observation.

Well the Braves Coughed up the Lead in the 8th then the Phils Coughed it up in the 9th…
Usually things will balance out over a course of a Season . It would have been a Great Comeback Win, but instead it ended up being a loss

Denny no mention of pappelbum farting on a reporter yesterday????????? cmon man if your gonna report, report.