Penalties, Lack of Offense Stifle Flyers in Game One Loss 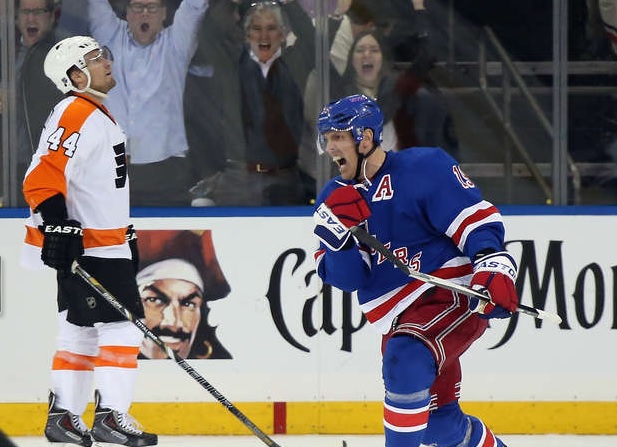 The Philadelphia Flyers dropped Game One of the Stanley Cup Quarterfinals to the New York Rangers. It was not one for the history books.

Good efforts in the defensive end contained the Rangers through two periods, but head coach Craig Berube’s game plan to dump the puck against Dan Girardi and Ryan McDonagh’s defensive pairing had only minimal success. The lack of offense through the game and a parade of penalties in the third period cost them Game One.

At the 7:28 mark of the first period, Scott Hartnell forechecked hard per the game plan and took McDonagh off his skates. Hartnell then collected the loose puck and passed it back to defenseman Andrew MacDonald at the point. MacDonald took the slap shot that changed direction after hitting a Ranger and beat goaltender Henrik Lundqvist.

After that goal, the Flyers could only muster intermittent offensive rushes against the Blueshirts. Berube lamented in the post-game conference that his team turned the puck over too much and didn’t get enough pucks deep. It seems then that he’s not going to change anything for Game 2, so expect more dump-and-chase hockey to follow.

The wheels fell off the cart and promptly exploded at the 7:35 mark of the third period. Rookie Jason Akeson, playing in his third NHL game and first playoff game, played an excellent shift in the offensive zone before committing a high stick penalty while aggressively backchecking. It was a careless penalty that earned a double minor for drawing blood.

The Rangers scored two goals in the ensuing four minutes, followed by an insurance goal from Carl Hagelin with just under five minutes to spare

The Flyers responded to the penalty by… committing three more separate penalties. Claude Giroux (one blocked shot and one missed shot all game), Zac Rinaldo (two shots and two hits) and Brayden Schenn (one shot on goal and five total shots) each spent time in the sin bin needlessly.

With regards to the Akeson penalty, he’ll be an easy target for the boo-birds, but he was one of the team’s better players in the offensive zone. Per ExtraSkater.com, Akeson was the only player to have a higher than 50% corsi for at even strength at 62%. That is, 62% of all shots taken while he was on the ice went towards Lundqvist.

If there’s anything to question here, it’s why Akeson saw more ice time at even strength than Brayden Schenn, Michael Raffl and Wayne Simmonds.

His line with Matt Read and Sean Couturier had played decently up to that point, but if Akeson was going to be relied on for offense, why wait to call him up for the last game of the regular season? The organization has a history of either being reluctant to call up their prospects or they call up bottom six forwards like Kris Newbury or Chris Vandevelde. Don’t get me started on Jay Rosehill either.

Emery was one of the question marks heading into the game, but he can’t be blamed for the loss. He stopped 32 of 36 shots on goal, with all of the goals occurring with quick east-west movement on either the powerplay or with players left alone in front.

General manager told reporters after the game that Steve Mason would be ready to practice on Saturday. It’s a tough call for Berube, but if Mason is ready, he will likely ‘tend the net on Sunday.

As the playoffs are a best of seven series, this isn’t time to hit the panic button. Unfortunately, the Flyers have yet to find a way to match up consistently with the Rangers and will be running out of time soon. Berube is set on sticking with the dump-and-chase model, so the team is going to have to work much quicker with their breakouts from the defensive zone in order to gain momentum through the neutral zone.

If they can’t win the battle at the end boards and generate shots on goal (the team took just one single shot on goal in the third period), they’ll be wrapped up by next week.

They’re also going to need to cut out the undisciplined penalties, which should go without saying.

Notes From The Phillies’ 1-0 Win Over Atlanta