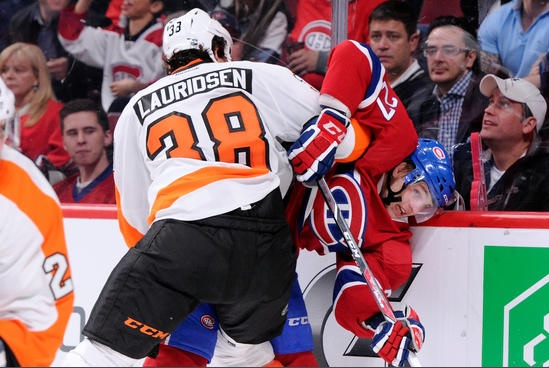 The premature departure of Erik Gustafsson from the Philadelphia Flyers organization for the KHL last week has not generated many ripples in the Philadelphia sports world, unsurprisingly. Although many fans had hopes he would develop into a regular blueliner in time, his talent ceiling was likely no higher than a third pairing defenseman.

The fallout of Gustafsson’s exodus to the KHL is that it has created an opening on the roster for a new seventh defenseman. He may not have the same skillset as Gustafsson, but the vacancy created on the roster may be the opening defenseman Oliver Lauridsen needed to finally make the Flyers roster full-time.

Lauridsen, 25, was drafted by the Flyers 196th overall in the 2009 NHL Entry Draft. A native of Denmark, he played three seasons with the St. Cloud State Huskies before joining the Adirondack Phantoms at the end of the 2010-11 NHL season.

When it comes to defending, however, Lauridsen has generally held his own. At 6’-6” and 229 lbs., the hulking forward has no difficulty playing the body and skates as well as one would expect given his size.

Lauridsen was recalled by the Flyers during the 2013 NHL season when defensemen began dropping like flies. In 15 NHL games, Lauridsen finished with 2 goals, 3 points, an even “plus-minus” rating and an average 15:08 of ice time per game.

His first NHL goal was actually the result of Boston Bruins defenseman Zdeno Chara banking the puck in off of then-back-up Anton Khudobin. It has been reported that Chara told Lauridsen after the goal that he was owed a beer.

For the advanced statistics crowd, BehindTheNet indicates that Lauridsen received just 41.5% of his starts in the offensive zone and faced top competition among Flyers defenseman with at least ten games played during that 15-game stint. Based on his Corsi ratings, the team allowed considerable more shots against Ilya Bryzgalov and Steve Mason than against opponents while Lauridsen was on the ice, but his relative Corsi (or the measure of puck possession relative to the rest of the team) was 0.1.

That is to say, the whole damn team stunk.

The takeaway from his career results in both the AHL and the NHL is that he’s good enough to be average when facing difficult on-ice situations. On a third pairing against weaker competition, he should be more than capable of providing serviceable play as a defensive defenseman.

Lauridsen has also served on Team Denmark at the annual Ice Hockey World Championships. In 13 games played between last offseason and the current tournament, he’s tallied 0 points and a -2 rating.

Lauridsen’s skillset is currently dwarfed by regular NHLers Luke Schenn, Nicklas Grossmann and Andrew MacDonald. It’s unknown whether all three will remain with the organization after this offseason, though, and they retained veteran defenseman Hal Gill last season in case of injury for those players. Regular trips to the press box are not ideal, but Lauridsen is a younger, cheaper option than another past-his-prime veteran in case of injuries.

The other factor warranting Lauridsen’s promotion is that he is no longer waiver exempt.

While he has only participated in fifteen NHL games, Lauridsen has finished three professional hockey seasons. He has one more year remaining on his $600,000 contract, but would be subject to waivers in October if the team elected not to retain him for the opening night roster.

Promoting Lauridsen to the Flyers wouldn’t be the “Cup-clinching” offseason move that fans might be waiting for, but it would be a valuable public relations move to show that the organization can, in fact, draft and develop defenseman (even if they’re sixth round picks).

It is also valuable for the organization to illustrate for their remaining prospects in the AHL that working hard in the minors can pay off. The Flyers have not had a good track record in recent years of promoting from within if the players aren’t first round picks, which has led to a number of players requesting transfers rather than face the continued road block from the big club.

The Flyers are hardly an organization to place bets on in any given offseason, but the advancement of Lauridsen to the big club following the departure of Erik Gustafsson makes too much sense.

Eagles Have No Challenge For Alex Henery

So another big slow plodding dude on D? Awesome.

if he could play he would have already been on the team. I liked him when he was up with the club last season but the Flyers were desperate then and I guess I was optimistically hoping he would excel overlooking his flaws. the Flyers have since signed Streit, MacDonald and drafted two prospects in Hagg and Morin.