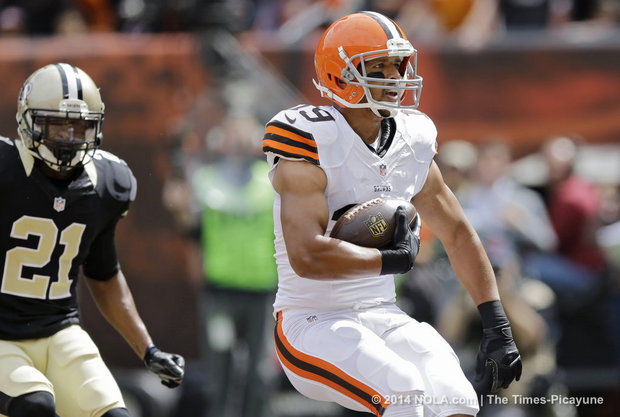 The Eagles have signed veteran wide receiver Miles Austin to a one-year deal for $2.3 million dollars.  Austin has been with the Cleveland Browns in the last couple of years, but has been sidelined most of the time with hamstring injuries.

Austin is 30-year-olds  wideout played in 12 games and started 11 of them.  He had missed the other five games because of a kidney injury.  Last year, Austin came down with 47 passes for 568 yards and two touchdowns in 2014.

The veteran wide out doesn’t have the type of deep speed, that the Birds need.  He’s got good size with average speed.

I see him as an insurance policy for the young wide receivers are going to draft.  I expect the Eagles to select a couple of wide receivers in the upcoming draft.  This is a deep draft for wide outs and there are a number of them with both the speed and size which Chip Kelly loves.

This Signing makes little sense…
Why didn’t the Eagles pursue WR Jarret Boykins
Of the Packers who is 26, Healthy & Hungry to make a name for himself..
He’s 6-2, 218Lbs and just signed a 1 Year cheapo deal
With the Panthers.
These older, broke down Players are not the way
To go in my opinion..

Hey paulman is this really a rumor or one of your own that’s not bad but I wouldn’t give up much maybe a 3rd or 4th not the second.

It’s one of my own Gloomy..,
Jon Hart will be on here by weeks end spouting the same Deal… Ha

The good thing about this is, Miles injury last year wasn’t his hamstring, so he has close to two seasons healed from that.

Another ex cowboy I’m getting sick.

Both Cooper & Austin will be goners after the 2015, for now, the Fans are stuck with both of them for this Upcoming Season..

Your right Paulman, the Eagles should have gone after Jarrett Boykin. Maybe the birds have their eyes set on WR Jalen Strong who I like a lot

Trade Rumors are Heating Up for Mariota….

Latest has The San Diego Chargers sending QB Phillip Rivers (Who is from
Decatur, Alabama and 2 Hours South of Nashville) to the Titans along with their 1st Round Pick (#17) and 3 Rd Round Pick (#81) for the Titans #2 Pick
The Chargers then Select QB Mariota..
Do Note that Titans HC Ken Wisenhut was Rivers OC out in San Diego when he had his nice bounce back Season

Funny, actually sounds like a good deal for both sides. I’m guessing Bradford, Kendricks, our 1 & 3 wouldn’t be as attractive to the Titans for obvious reasons with what Rivers has shown vs. Bradford.

What a change in excitement…so many combinations we had to get Mariota, we weren’t even talking about who we were drafting because so many of our early round picks were part of the deal to get Mariota…

But if it somehow happened…would it give a reasonable excuse to call out of work that Friday?

Sam Bradford is well liked and respected around the NFL.. He simply does not have enough recent tape to prove that he’s a Franchise QB..Chances are that he’s now 5 Years into his Career that it’s unlikely that he all of a sudden plays at a very high level to warrant that almost $13 Million Salary he’s getting this Season
We shall see, but I find it very hard to believe that a Team with a QB need is taking the Risk on Bradford that Coach Kelly is..
Now there is no 2nd Round Pick in 2016 either so if Bradford does not work out, and the Eagles end up being an average Team, this Trade will be costly to the Eagles resulting in a wasted 2015 Season and Resources ($50 Million Spent in Free-Agency) plus no 2nd Round Pick in the 2016 Draft which may end up being in that #40 Range for Next Year