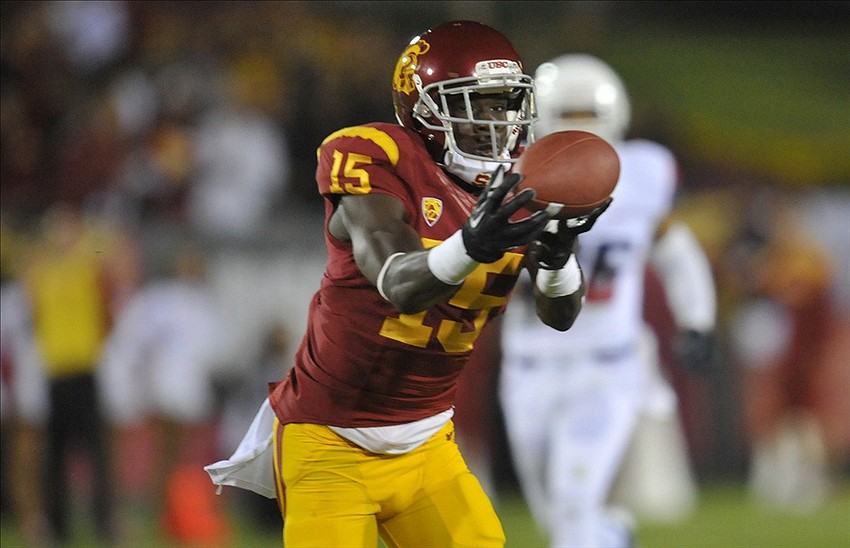 The move up to get Marcus Mariota didn’t work because you’ve got to have partners in order to make such a huge move.  Cleveland wasn’t about to cooperate and Sam Bradford wasn’t going to sign an extension without a no trade clause.  We’ll eventually find out exactly how far things went, but bottomline it didn’t happen.

I like the move the Birds made by replacing Jeremy Maclin with his clone.  I know Agholor is probably going to wear number 15, but they might as well have him wear number 18 like Maclin and no one will know Maclin ever left.

It’s simple, they let Maclin walk, then they drafted a younger, faster version of number 18 to replace him when they selected Agholor with the 20th  pick in the first round.  He stands 6’0″ weighs 198 pounds and runs a 4.42 in the forty-yard dash.

During the last couple of years, the youngster ran every route in the book and he will go get the football when it’s in the air.  Like Maclin he’s a precise route runner with excellent hands and very good body control.

“He’s dialed in as a football player,” Eagles head Chip Kelly told reporters last night at the NovaCare Complex. “He’s in the Jordan Matthews category in terms of his approach to the game, and always striving to be better. The great thing about Nelson is that he has a growth mindset, not a fixed mindset. He’s always trying to get better.”

Thoughts On The First Round

Ken Whisenhunt: Andy Reid’s Story Influenced Me Away From Deal