Patriots Equipment Manager Didn’t Deflate On His Own 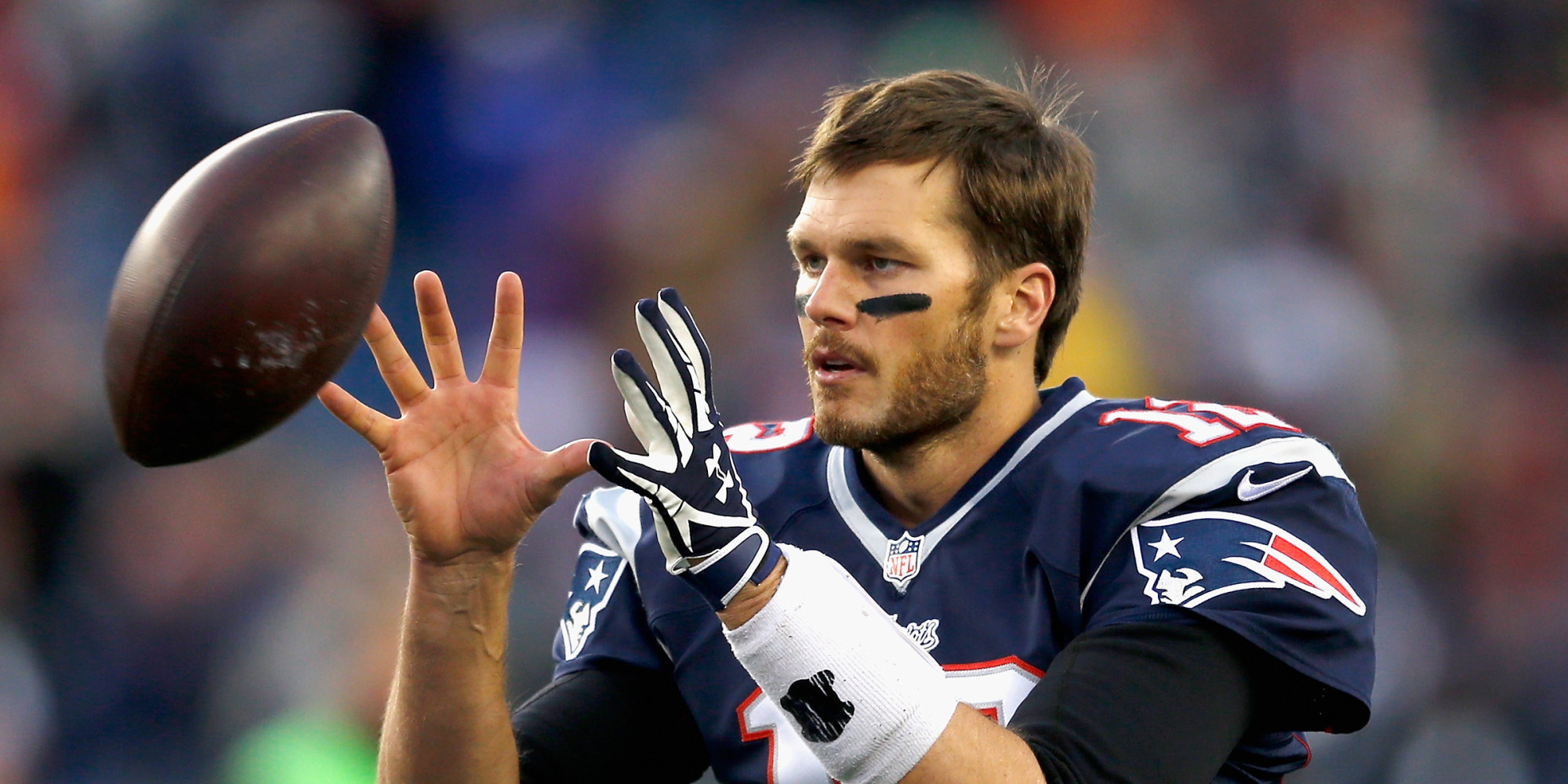 According to the Wells report, there’s no smoking gun or clear evidence that Tom Brady had his equipment manager deflate the footballs before the game.  The report does say that it’s more probable than not that Brady knew what was going on.

In my opinion, there’s no doubt that Brady knew.  There’ no way in the world that equipment assistant John Jastremski and Jim McNally, a game-day employee who serves as the officials locker room attendant, would decide to deflate the footballs on their own. Do you think these guys would put their jobs on the line by doing something they weren’t asked to do?

Check out this emails between Brady and the equipment assistant Jastremski.

Here are more texts later in the morning.

Jastremski (10:54 a.m.): FYI…Dave will be picking your brain later about it. He’s not accusing me, or anyone…trying to get to bottom of it. He knows it’s unrealistic you did it yourself…

There were more text messages and phone calls between the two.

I think they should suspend Brady for a couple of games and give him a stiff fine.  That’s the honorable thing to do.

There’s No Merit To LeSean McCoy’s Comments, But…..

Caught with his hand in the cookie jar. I like Brady and have much respect for what he has accomplished as a QB, but damn, this one doesn’t look good for the golden boy

Damn La’el Collins meet with Jerry Jones at his private residence. If he signs with the Cowgirls they will officially have the best line in football. Doesn’t matter who is in the backfield, they will dominate again..

Jerry Jones plays by his own set of rules…Dan Snyder has been trying to imitate him for this very thing lol.

I hat the fucking Cowboys.

How the hell did they even pull this off? Dude was supposed to meet with Miami still.

A lot changes when you sit up in a mansion with your momma talking about money lol.

I can hear his momma now…

TS..Jerry Jones is a go getter…a pimp…he makes shit happen! I hate the team, admire him for going after TALENT to continuously make his team better!!!

He prolly had the whole cheerleading squad over….like hey young buck sign wirh me and you can plow them all…..whadddya say…..hell yes mr jones……straight up pimp

Z theres a lady in the thread man lol.

It’s Official – A 3 Year $1.65 Million (All Guaranteed) for La’el Collins who has signed with the Cowboys and likely will be their opening Day Starting RT
to go along with Pro-Bowl’s Guard Zak Martin, Center Trevor Frederick and LT Tyron Smith who are all under 25 Years Old …. Yikes..

paul, where are Lil Bron’Bron Jons sources on this?

Who do you let go first…..Zack Martin or Trevor Frederick?

That line wont be able to stay together for long.

Cowboys could Trade LT Tyrone Smith in 2 Years Time when Frederick and Martin are due big Bucks as they finish up their Rookie Deals and get High Draft Picks in Return for Tyrone Smith, then Shift La’el Collins from RT to LT
They are stacked and a good problem to have
Current RT Doug Free has a good size Contract and will probably be traded by the Cowboys for a Defensive Player here by Camp Time..
I could see Cowboys Trading RT Free to the Dolphins for OLB Dion Jordan as an example or to the Colts or some other Team in need of OL…
Cowboys Jerry Jones is going all in as their Window with Romo is not very long..

Tyron Smith is not getting traded. Hes arguably the best tackle in the game. Doug Free only has 1 year guaranteed. Hes going to RT.

Doug Free is a Goner

Wow, so the cowboys who already have a stout o line, just bettered it, while the Eagles whose o line is in desperate need of talent and an injection of youth just twiddle their thumbs. I hate the cowboys, but I admire their go get it attitude as it relates to acquiring talent.
Disappointed to say the least!!!

Had nothing to do with twiddling their thumbs. They sat in Jerrys mansion…if financial security is your main object….no other team really had a shot in this.

Izzell, you know what, if the Eagles were aggressive they may have had a shot, hence, twiddling their thumbs. They could have offered the man the same thing. They did not even show interest. Dallas…multiple bowls, Eagles = 0, that is the bottom line. They need to do everything they can to infuse youth and talent on the o line…nothing for 2 years. Twiddling their thumbs. We sit around and talk about culture, while our division foe gets that much stronger.

Our o line is not even set as Evan Mathis is telling the head coach..DEEZ… and our old rb accuses the man of racism, shit is a joke.

La’el went straight to the biggest cash cow in the NFL. This had nothing to do with the Eagles. This was just a guy looking for the best financial investment possible.

If the Redskins hadnt ended up signing Scherff he would be the Redskins starting RT next year. I pretty much guarantee it.

I would have too, but he did not know what he was going to get from the boys til he got there. Once again, the Eagles showed no effort to acquire his services…and they have a greater need. I am not blaming Colins at all….the Eagles need to be aggressive and show initiative.

DeMarco Murray just said damn!!! But at least I got paid. You can’t knock the Eagles for not getting into a bidding war but you can question why not take a flier in the 6th or 7th round, but instead we draft the 56th DB on the roster and a 6’9 stiff. I would have rolled the dice on Collins and if it went left dropped his ass like a hot rock. That 7th round stiff would’ve been there as a UDFA.

Biglion — if a NFL prospect is drafted he can choose not to sign with that team and reenter the draft the next year. If he is not drafted he cannot re-enter the draft and becomes an non drafted rookie free agent forever. La’el Collins threatened any team that drafts him after the 3rd round he will re-enter the draft in 2016. So any team that drafted Collins after the 3rd was giving him an out to at least double his money the next draft. ( he knew he did nothing wrong and would be drafted in the first round next season)

Z, that’s collusion against the law. and E0S the NFL said he couldn’t re enter the draft next year, his agent is/was an idiot.

Anytime I hear the over the top doom and gloom of Chip did this Chip did that….

Eagles just sign their first round pick, that’s four down n two to go, expect the rest to sign before rookies report tomorrow

Just another reason to smile when we blank the cowgirls this season.

Just once think outside the box in a good way but nah we get stuck with oline coaches made into a DC and a WR with a big cap number because he can block. The life of an Eagles fan is never easy.

Big its so hard being a eagles fan……but Its in my blood I couldnt change teams if we never won a super bowl…,,oh wait we havent goddamit

LMAO and SMDH at the same time…exactly

ehl it actually hurts me that we no super bowls….how am I a eagles fan shit….lol

Z, it does hurt. To top it all off my fiancé is a Cowboys fan, she knew I wanted the Eagles to get Collins, now I have to listen to this shit…on top of being reminded how many trophies they have and we don’t have.

dude my best friend is a cowboys fans he always sends me pocs of dallas super bowl rings and then shows eagles rings as lolly pop rings….it makes me sad and laugh at the same time…..but whatever go eagles

EHL, I think your need to get another Fiance’ or at least another Gal on the side.. You’ll be driving yourself crazy .. Does she make you Decorate your Christmas Tree with Jerry Jones Balls… Good Grief..
Ha ….

Or Large Beach Blankets with the “Star” on it … Jeez…
Makes you hang a House or Porch Flags with the Cowboys.. Dang, that would be rough shit right there..

She’s the only one in her immediate family.. everybody else is an Eagles fan.

Lol, no pman, I have to much time invested. The only balls that go on the tree are popcorn balls and Eagle ornament balls.

Ha.. Only razzing you… Congrats on your Engagement… When is the Big Day..

pman. it;’s all good. I get razzed all the time about it.

Redskins fans are going nuts here too saying….”If we took Williams we could have had Collins too!!!!”

I can’t believe this shit. What a joke this is. I almost feel this just isn’t fair

Smart move financially by the kid and his reps…..
Gets to keep a lot more money in his pockets by choosing Texas over PA.

IzzellJenkins
Reply to  Gotta Luv It

It was the only move financially outside of Florida. And nothing in Florida really made sense. Miami is not a contender. Neither is TB.

Miami is a contender as much as Philly is and in fact, Collins would start
at LT or RT from Day 1 for the Dolphins, where would he even play for the Eagles.. He and his Agent Group had zippo interest in Philly with a ridiculous City Wage Tax… on a minimum deal.. No Way..
Florida has no State Income Tax I believe either

No state income tax PLUS a top 5 media market with an already stout OL.

It was smart all the way around.

He’s half as good as everyone thinks he is he will be signing a HUGE contract in 2 years time – 3 if they make him wait his entire contract (which I doubt).

Why would La’el Collins even be interested in Philly??
Makes no Sense, He would have to learn a new Position (Guard) which he doesn’t want to do, be far away from home which he doesn’t want to do, and get killed financially with the High Taxes of PA .. Eagles were not even in the ballpark or running at all for La’el Collins at all, as I stated all week long..
The Eagles should have Drafted an OL in the 4th Round instead of Trading it to Detroit for a 3rd Rd Pick in 2016 Draft..

Dallas is going to have one monster O Line

Did you check with invino on that conclusion first?

Dodged a bullet with not signing Lael. The Eagles WILL win the division in 2015. They barely lost it last year, with scrub Sanchez at QB. Dallas is full of thugs and will suffer.