NFL Was Correct for Throwing the Book at Brady and Patriots 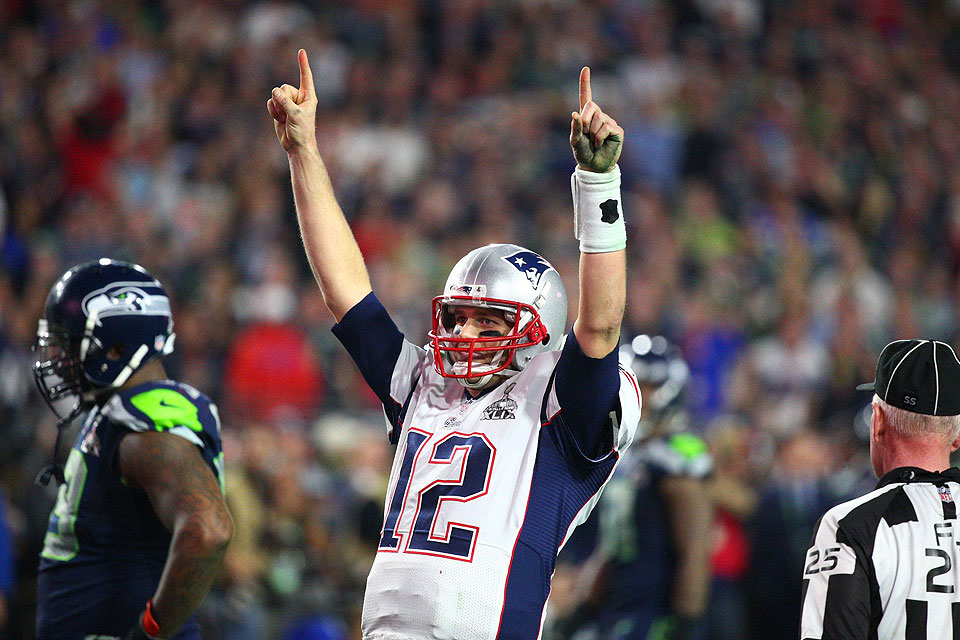 Ian Rappaport of the NFL Network said Bob Kraft and the New England Patriots knew this was coming as well as Tom Brady and his agent Don Yee.  They had anticipated a suspension of two to six games for Deflate-Gate.   Brady was suspended four games and that will likely be reduced to two games after he appeals the suspension through the NFLPA.  So the Pats will lose one of the NFL’s best quarterbacks for two games at the beginning of the season.

I believe the NFL was correct in assuming this hadn’t been the first time the Patriots had deflated the footballs.  A slap on the wrist wasn’t appropriate.  They needed the book thrown at them and that’s just what they got.  The Patriots were fined one million dollar and they had a first round draft pick in 2016 taken from them as well as a fourth rounder in 2017.

This wasn’t the first time the Patriots had been caught cheating.  Everybody remembers the Spygate controversy back in 2005, when the Pats were caught taping a New York Jets sideline coach as he sent signals into his players.  Obviously the penalties which were levied against them in 2005 didn’t discourage them from cheating again.

I also think it’s interesting that New England won Super Bowls in both years that they were caught cheating.

Brady and the Patriots are paying a steeper price this time because they were caught cheating and lying about it.  Much of the punishment on Brady is because he lied.  The Pro Bowl quarterback was also uncooperative with the Ted Wells investigation.  He refused to hand over text messages and cell phone messages.

“Failure to cooperate in an investigation shall be considered conduct detrimental to the League and will subject the offending club and responsible individual(s) to appropriate discipline.”

What kind of an example is Brady is setting to the youngsters of our country?  Is cheating okay if you win?  Are double-standards okay?  I say no.  Brady needs to be held accountable, just like the rest of the players in the league.

Everybody knows Brady was blatantly lying when he said he had no knowledge of the balls being deflated.  Are you kidding me?  Did you check out the text messages between the two New England Patriots equipment guys.  This was the correct punishment and it probably should have been worse because they know it’s going to be reduced after appeal.

Nelson Agholor: Focused On Getting Better Each And Everyday

Tom will continue to smile with the camera on, and put on the act that his side of the story was never heard.

And why not smile? Tom has been the poster boy, a Derek Jeter like sports figure, how much is thus going to disrupt his reputation in the long run?

He knows he has to play the disappointed role for a while..he will make jokes once again about this, maybe while hosting snl.

The pats feel they are above everyone else, and it’s only once they are caught that they show any remorse, but even during spygate the reactions from the organization were forced, they still have their rings..trophies..

a few dollars…draft picks and suspended games…a blow to the pats, but i doubt it will prevent the next attempt by them to push the rules…

Call it selfish, but I don’t want to see Dallas get a Brady free PATS team in week 4. Hope they reduce it to 2 games

This suspension is a damn joke. You are not only penalizing the pats by suspending brady you are also penalizing the eagles, redskins, giants, falcons, buccaneers, lions, vikings and the 49ers. all these teams have teams in their division that get to play a bradyless patriots. you suspend him the year or dont suspend him at all.

Cheating is cheating…..fuck the golden boy he is a prick and the patriotS think they are above all……SUSPEND for the season or dont suspend at all is exaactly right…..the nfl is money making bitch it just so happens the game golden boy comes back for is the team he cheated against…..revenge story will sell well……they cant have brady out for season he brings them too much money

After Brady and the Players Union Appeal, it will end up a 2 Game Suspension
as I stated the final Punishment would be… No biggy either way…

i hope brady wins appeal and gets no games

It’s not the Deflating of the Ball MHenski,
It was the Lying, the Covering up and Brady not be forthright with the Investigation…
I also believe that this letting the Air-Pressure out was already being Tracked by the Colts and teh NFL Office and that Brady was probably already addressed about the situation but continued with doing his own thing..
Cots/Pats Played in the Regular Season where Colts Safety Mike Adams made 2 Int’s off Brady and kept the Balls for his personal keeping and brought to his Coach’s of how soft and de-flated they were..
This Playoff Rematch was the final straw and the NFL had to come down hard after Brady and the entire Pat’s organization (mostly Owner Kraft) were pretty adamant about no wrong doing being done…

considering they cant prove he lied or covered anything – they can only imply its not about that its about a deflated ball. thats the only fact here

Which is what the Public Knows.. I believe Brady’s Footballs were being tracked for a few weeks and that there is other information involved that we will never know, or at least not know now.. It is what it Is and a huge embarrasment to Owner Kraft, HC Belicheck and to the Patriots Organization..

the embarrassment is really with the nfl for allowing opportunities for teams to do this. all qbs and teams should be able to have the same balls at a standard psi with no deviations, no doctoring balls, no throwing with them pregame…

nfl should get delaware river mud, have the refs rub them down before the game like baseballs…. inflated to a standard psi and go from there…

mh/ teamhurnt, you a Patriots fan all of a sudden? F^#@ those cheating ass frauds. They’ve been cheating for years, have a well hated, miserable bastard for a coach, & have gotten away with it for far too long! I’m actually surprised the Commish was so harsh with the penalty, with his good friendship with Craft & all. I thought he’d give them a slap on the wrist again & make evidence disappear, like he did, getting rid of the spy gate videos! The Commish is having a horrific year+ & had to come down with the hammer. Don’t worry, they’ll win the appeal, the punishment will be lowered, to show this is all a dog & pony show! You’ll get your wish Patriots fan! LOL!

They all cheat.. From Chip to Pete Carol to the whole damn league. In order to get into position to be a head coach in this league or some sorts u have to cut a few corners. I don’t like the Pats at all, but at the end of the day this is football. You have to line up and beat ur man across from u. It’s just the patriots and the whole world hates them besides…pats fans. It’s because they win consistent people dislike and are jealous of them l. If it was any other team who was average nobody would batt an eye. Stop this.. They cheated yes, and it wasn’t right but this isn’t the reason why the won the super bowl LMAO

All I wish is the Eagles would get involved in this cheating shit…..so we can have something to hang out hats on other than Jawarski getting paid to throw SB 15…..allegedly……..

Vinnie we actually agree on something. I’m mean the penalty for cheating on your way to the Superbowl (again) is a 4 game suspension.

Eagles need to get with the program.

They got what they deserved and the smug, arrogant Brady got what he deserved too!
When you are caught cheating you pay the penalty!
With that said, I’ll take those two cheating asses-Belicheat and Brady-on my team any day!

If you ain’t cheatin you ain’t tryin. If you get caught you pay the penalty nothing to see here, move along folks.

cheating and the nfl go hand and hit shit lets look at the eagles.

1. 5 guys suspended for PEDS since 1989
2. nfl currently investigating if we agree with maxwell prior to legal tampering
3. EAGLES DEFLATED BALLS TOO
Ex-Eagles and retired Pro Bowl quarterback Jeff Blake confessed in an interview that removing air from footballs was common when he played in the NFL from 1992-2005.

“I’m just going to let the cat of the bag, every team does it, every game, it has been since I played,” the ex-Eagles QB said Wednesday in a radio interview on the “Midday 180” show on Nashville’s 104.5 The Zone. “Cause when you take the balls out of the bag, they are rock hard. And you can’t feel the ball as well. It’s too hard.

“Everybody puts the pin in and takes just enough air out of the ball that you can feel it a little better. But it’s not the point to where it’s flat. So I don’t know what the big deal is. It’s not something that’s not been done for 20 years.”

Blake says that he’d order ball boys to let air out of his footballs just before the start of games during his entire NFL career, which included time with the Eagles in 2004.

PUNISHED? No but … it’s more probable than not that this was cheating

PUNISHMENT: He admitted doing it

5. Eagles put a bounty on players

On November 23, 1989, the Philadelphia Eagles defeated the Dallas Cowboys 27–0. Following the game, which was broadcast on CBS and later dubbed the Bounty Bowl, Cowboys head coach Jimmy Johnson alleged that Eagles head coach Buddy Ryan had taken out a bounty on two of the former’s players, kicker Luis Zendejas and quarterback Troy Aikman.

Said Johnson: “I have absolutely no respect for the way they played the game, I would have said something to Buddy, but he wouldn’t stand on the field long enough. He put his big, fat rear end into the dressing room.” Ryan denied the bounty accusation, saying that film of the game “show that Small had no intention of hurting Zendejas.” The Philadelphia coach asserted it would have been in the Eagles’ best interests to keep Zendejas in the game because he was in a slump. Ryan also joked about Johnson’s accusations.

PUNISHED? No but … it’s more probable than not that this was cheating

PUNISHMENT: This wasn’t the first time Buddy Ryan put out a “contract.” He was even rumored to have offered an incentive to flatten Chicago Bears head coach Mike Ditka.

6. EAGLES HAD THEIR OWN SPYGATE
Former Eagles quarterback Ron Jaworski admitted that when he played, his backup quarterback would spy on the defense and signal Jaworski by dropping red flags to indicate blitzes.