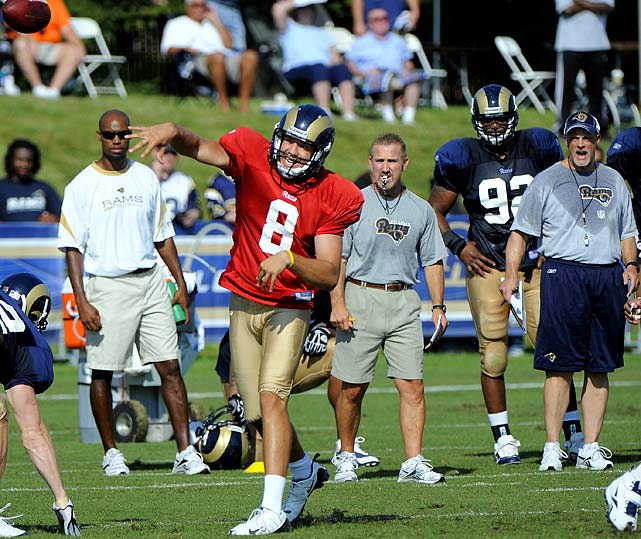 The rave reviews continue to come in for Eagles quarterback Sam Bradford.  Current New York Giants defensive coordinator Steve Spagnuolo was on 97.5  The Fanatic yesterday with Anthony Gargano and the former Eagles coach was going on and on about Bradford’s “competitiveness”.  Spags says Bradford is a “great competitor” and good things are in the Eagles future because of it.

“Trust me when I tell you he’s got all the skills, and I keep going back to the fierce competitor because I believe elite quarterbacks in this league have that,” said Spagnuolo. “You think of them all, the Aaron Rodgers, the Tom Bradys, the Peyton Mannings, Eli Mannings, they’re all very fierce competitors.”

I’m not all that worked up about what Spags had to say because you know he’s going to have good things to say about a quarterback, whom he drafted with the first pick in the draft in 2010 when he was the head coach of the St. Louis Rams.  Spags is a loyal guy and he’s never going to trash one his guys in public.

“I still remember the workout at Oklahoma when we went to watch him, it was outstanding,” Spagnuolo said. “I remember talking to Mike Holmgren after that. Mike was at Cleveland at the time, and I want to say they had the fifth or the sixth pick, and he was trying to find any way and every way to get Sam Bradford. He felt that—and coach Holmgren has seen a lot of quarterbacks—he said it was the best workout he’d ever seen.”

This may be true but I’m going to wait to see if Bradford can inspire and lead his teammates, while making plays on the field.  I’ve heard of players putting in great workouts, but that means nothing if you can’t do it between the lines on Sundays.  Unfortunately, I didn’t see much when he was healthy in St. Louis to get me excited.

“I’m glad we took him, I think the world of him,” Spagnuolo said. “I know he’s going to do great things there in Philadelphia.”

Spags is loyal to a fault.  Bradford didn’t have a lot of help in St. Louis, but the fact that he kept getting hurt, took away any chance of the team being successful and that inevitably cost Spags his job.

I know Bradford is more on the quiet side from what I’ve heard about him in the locker room.  I’ve heard he can go a while without saying a word.  He’s not the kind of quarterback, who is be the great leader in the locker room or out there on the field screaming at the top of his lungs.  The former number one pick in the draft has a leadership style that is more “lead by example”.

I’m not sold on him yet.

It’s all going to come down to two things.  Will he stay healthy?  Will Bradford make the Eagles a championship team?