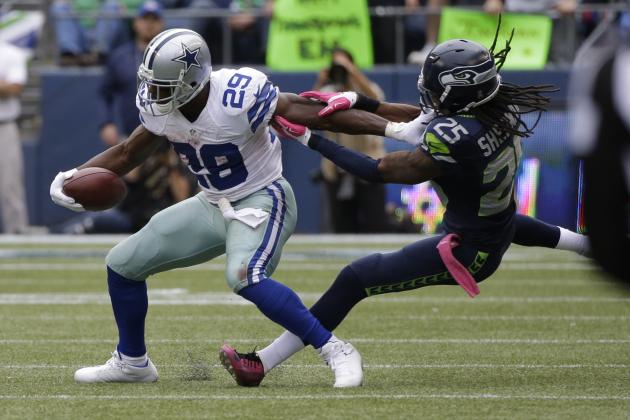 Dallas Cowboys Hall of Fame wide receiver Michael Irvin isn’t buying what Jerry Jones and the Dallas front office are selling.  Irvin disagrees with the thinking that you can put anybody behind the Cowboys offensive line and they’ll be successful.

Irvin thinks the loss of Murray for the Cowboys and the acquisition of DeMarco Murray for the Eagles has made Philadelphia the best football team in the NFC East.

Irvin was on 97.5  The Fanatic with Ron Jaworski and Joe DeCamara last night and he wasn’t holding anything back.

The Cowboys didn’t draft a running back this year.  There were rumors that they were going to trade for Adrian Peterson, but that’s no longer likely.

He thinks Murray is an upgrade for the Eagles over LeSean McCoy in Chip Kelly’s offense.  The Playmaker feels Kelly will be able to get his new, big and physical running back matched up against little defensive backs when he spreads them out with those three and four wide receiver formations.

“I call LeSean McCoy a guy that beats defenses”, Irvin said. “DeMarco Murray is a defense beater. There is a difference. He ain’t running around nobody. He’s running through you.”

It definitely sounds plausible.  Kelly wants to get as many defensive backs on the field as he can, spreads them out by formation, then he runs the football against them.  This is why he wants wide receivers, who can block.

There are many defensive backs in the league who don’t want to hit or tackle anybody, especially a 230-pound freight train like Murray.

“You gotta put all of your guys on the line of scrimmage to stop DeMarco,” Irvin said, “and then your passing game can do whatever it (wants to do).”

Irvin believes the presence of a punishing runner like Murray in the Eagles offensive backfield will help Sam Bradford and the Birds passing game like it helped Tony Romo and Dez Bryant a year ago.

Wait just a minute there Mr. Irvin…I thought he traded McCoy because he was black???

On a Side Note
Congrats go out to yes, John Papelbon, for becoming the All-Time Phillies Saves Leader with his 113 Save last evening versus the Pirates surpassing
the 112 Saves that Former Phillie Jose Mesa had reached.
Carry On

Paplebon is the all time saves leader for two franchises.
It shocks me that he is the philly leader and that Mesa was the leader before him… with Lidge, McGraw and I think Bedrock won a Cy Young (?) as a philly closer–
So congrats Pap– now lets trade you….

I was surprised too with Mesa being that high in Saves and thought Lidge would be up there… I am not a big fan of Papelbon by any stretch, but being 100% honest, he’s one of the few high priced Free-Agents the Phils have ever signed that’s actually produced consistently each and every season as a Player/Phillie..
I know his Personality turns off a lot of People, but I have to believe that some Playoff ready Teams could use his Arm and Experience in the Bullpen as we get closer to Trade Deadline.. (The Tigers, Blue Jays,Orioles,Pirates, Angels and others depending on Injuries could all use help in the back en dof their Bullpens)

The Ravens with Question Marks about their CB’s quickly signed Kyle Arrington to a 3 Year Deal pending a Physcial.. Kyle Arrington was a 6 Year Veteran who was cut by the Patriots a few days ago and should fit nicely into their Rotation along with Jimmy Smith, LeDarrius Webb whom both can’t seem to stay Healthy

Wow the patriots keep digging holes so to defend themselves I guess the mcnally guy who was guy who deflated the balls says in his text ssomething about deflating and the patriots descibed this as the guy being fat and thats why he said that……oh lord children can lie better then the patriots…..they just need to admit to it and accept they are idiots and move on

Lawyer Adam Dershowitz….cousin on his fathers side of the more famous and better lawyer Allen Dershowitz. Adam’s biggest case was defending a “New Kid on the Block” from a claim that he actually had talent. The case was thrown out for lack of evidence, but Dershowitz has received a level of notoriety in Southy for his efforts.

Lol funny pman…..dude pman why do they keep lying at this point no one believes them…..its just crazy people this succsessful and rich are so dumb

Common Sense is out the Window now…
The Pats with Owner Kraft and QB Tom Brady are taking things personal and digging deep and will not admit to any wrong doing..
I believe Kraft thought he had a deal with Commisioner Goodell from back in
January when the Story first broke and then only to find that the Penalty is much harsher and laid out by Deputy Front Office NFL Employee Troy Vincent.. Kraft is seething at Roger Goodell…

DAmn now the pats snitching on other teams doing it including the colts this shit is crazy…..a bunch of children

It humors me ,in a league worried about their illustrious shield,have let themselves be vulnerable ,by there own doing.An umpire keeps a sack of balls and inspects them,a ref in hoops ,also before tip -off ,even before the ball is in the air,he inspects the ball.This ball ,is everything,it defines singularly,your very game.How a billion dollar league doesn’t understand that the “balls” are literally your “jewels” ..you let them out of your jurisdiction,shits going to happen..It ain’t rocket science ,yet still I haven’t heard the commissioner utter,our balls are everything ,we need to take care of them..They do this in the Super Bowl,but even in championship games ,the league is loosey goosey with there security..The ball is sacred ,that pig pays all the bills,forsake me,figure it out ..it really is simple ,follow the mlb..nba…they’ve got it right..

And fat people only deflate if air escapes,which is by definition,deflate,let down ,flatten ,or if used as a verb,subdue ,humble ,cow and chasten.Why do pinnochipios define this league?Who in the Patriots office pool,said McNally was referencing being fat,and deflating…the only thing deflating,is my confidence that any of you billionaires has a clue..what was that meeting like? The league has a text calling McNally the deflater…damn ,what do we say? And this is the best they got…stupid bowl champs …

Just watched some film of undrafted WR Devante Davis. This kid has skills. Love his size 6’3 220. Could become a nice red zone target and has the size, hands and speed to work the middle of the field. Kinda reminds me of a Demaryius Thomas. He’s also a solid blocker. That right there is a reason for why he might just make this team

Eagles signed 2-3 of very talented Receivers after the Draft with
Davis having a real chance to make the Squad but don’t sleep on
John Davis or the Bailey kid either…
The Knock on Davis is his lack of speed off the get go from the line of scrimmage..

They better have signed some talented WRs, because right now, it looks thin. Sure there is a lot of promise, and I think that in 2016-17, the Eagles will be in good shape. But this season??

That crew is dodgy as hell. I don’t care what anyone says (and I think WRs are the most overrated positions on a team) but 2 2nd year guys, a rookie and Cooper??????

Your Forgetting Miles Austin who will be a 1-2 Year Stop Gap at WR if his hamstrings allow him to play at full-speed… Austin had a pretty nice Season last year with the Browns and their QB Mess and limited Offensive Schemes..

paulman no way in hell Matthews gets 40-45 touches even if Checkdown The Gimp lasts a whole season, I agree Tomlinson makes the team but he’ll barely see the field.

I believe Ryan Matthews becomes the primary receiver out of the backfield Biggy.. Remember 45-50 Receptions is about 3 Per Game which I see Ryan Matthews easily attaining .. Murray used more as a Runner,
Matthews will be used both as both Runner/Receiver and will take more and more snaps from the aging Sproles as the Season goes on..

No he won’t paulman.

You want to make a Gentleman’s Bet Biggy ??
Who do you see catching balls out the Backfield ?

$25 to your favorite Charity

That’s a deal paulman, Matthews will take Sproles carries and Sproles will be used exclusively in the passing game.

So why do you think the Eagles will have 435 completions (minimum)?

Do you expect the Eagles to pass more this year? I don’t….certainly not with a china cabinet at QB, 2 2nd year guys, a rookie, Cooper, and the aformentioned forgotten Austin manning the WR spots.

Yes I do Vinnie,
I believe NFL Defenses will stack the Box to dare the Eagles to Pass more in an attempt to shut down their Running Game.
Eagles will want to have a 55%-45% Run to Pass Ratio but the Problem is that the good Defenses will take the Eagles running game away from them
(Bills,Pats,Jets,Dolphins,Panthers,Redskins,Giants,Cardinals) and force them to pass more than they would like..