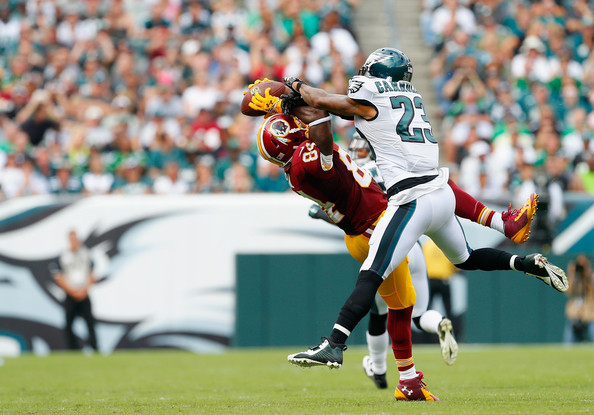 We thought it was going to be second-round draft pick Eric Rowe lining up at the cornerback spot opposite Eagles free agent acquisition Byron Maxwell, but PhiladelphiaEagles.com let us know that it is Nolan Carroll, who is lining up opposite Maxwell.  It doesn’t mean he is starting at the position, but it does mean that right now that he’s the cornerback most familiar with the Eagles coverages.

Rowe and Walter Thurmond, who was signed during the off season are expected to be the three cornerbacks with the best chance of starting at that spot opposite Maxwell.

“I’m not putting stock in it at this point, because we’re all getting the same amount of reps,” Carroll said. “Every time I’m out there I’m focusing on my technique no matter where I’m lining up. It’s not about going against the guy across from me, it’s about what I can do every single time and how much I can focus on my technique on every snap.”

“I want to start again, sure,” he said. “Last year was challenging. I did what they asked me to do and it was something that took some time becoming accustomed to doing. I felt I became a lot more comfortable with later in the year. I learned how to play as a sort-of linebacker, about how to play some safety. I was able to talk to Brandon Boykin about playing in the slot, talk to DeMeco (Ryans) about playing linebacker and learning about those fits.

“It was another opportunity to help the team. Same thing now. Whatever they want. I want to be out on the field. Right now it’s me out there with the ones, but everybody is going to get a chance. I just have to take advantage every time I’m out there.”

I will keep you posted about what’s happening at the cornerback position and fortunately I will get the chance to check them out later this afternoon at the Nova Care Complex.

So, we are to get excited, and have blind faith in a guy who couldn’t supplant Bradley Fletcher, as the starter??? – but assume he is going to be better this year right….???

We can’t think that every average player that is brought in to play a position, is going to consistently play over his head game in, and game out. Eventually we’re going to have to breed some horses – by drafting them, or purchasing them through free agency…….

Nolan Carroll does nothing for me. I’d rather see Jaylen Watkins, or JaCory Shepard, step up, and earn that spot, and play Eric Rowe, at his natural position at Safety, because Earl Wolfe stinks……..

How could he have done that barely on the field except for Special Teams play Big Mhenski?? He hasn’t out preformed anyone in the secondary last year.

He no upgrade at all brother, it’s a lateral move. That’s my point.

DC Davis had Fletcher & C Williams penciled in as Starters last Camp..
It would have taken an injury for Davis to make a change last Summer, add that to the inept schemes and techniques with former Secondary Coach J Lovett and the Secondary was what it was….
Eagles had Nolan Carroll spend more time as in Interior/Slot CB and even Replace LB D Ryans as an inside the numbers cover player.. It wasn’t until the end of the Season that Nolan Carrol was really given an opportunity to play the Outside CB Position which is what he’s most familiar with and do note that he started at outside CB for the Dolphins in 2012 & 2013

Nolan Carroll sucks Paul….why are you setting your self up for a fall??>.LOL!!!

I am not setting myself up for anything GMCliff…. CB Nolan Carroll is an upgrade over CB’s Fletcher or Williams from last Season.. Is he a Stud Cover CB, No he is not, but he’s better and will compete on every play more so than than either Fletcher or Williams as the Young CB’s learn (Watkins, Rowe,Shepard all still have lots to learn)

Nolan Carroll is NOTHING close to a stud cover corner….If he was, he would have been starting last year over Williams, and Fletcher.

See, those are the statements that make me honestly believe you have a mediocre vision of a Championship Football team sometimes…

You are setting yourself up, because WHEN, not if he gets burned royally as he did when he was in Miami – STUD MY ASS – Everyone on this site will be convinced, and aware of how much of a lateral move it was starting him – and then you will start backpedalling and making excuses…..count on it.

GMCliff, Why are u having a difficult time comprehending the written word?
Where in my response above, do I state anything close of Nolan Carroll being Stud/Shutdown CB , in fact I stated that he is not one, but Nolan Carroll is still an upgrade over Fletcher and C Williams…

I know you’ve been high on him since they signed him, but that doesn’t mean he’s an upgrade because you say so – HE hasn’t proven that AT ALL…..

So, you’re really just stating wishful thinking……with no foundation, or reference of any proof…

Hopefully the best player will emerge here, but they still have to find someone to play safety opposite Jenkins.

I believe Eric Rowe will eventually be the Safety Opposite Jenkins
but a lot depends on whether Jaylen Watkins or Ed Reynolds play well at Safety which means Rowe would play more CB.. and it also means can Players like Carroll,Boykin,Thurmond, Diggers show well at CB
In the end, I think Rowe will be a better as an NFL Safety than a NFL CB

I agree with you about Rowe. I think that is what they want, but I could see him playing CB until they are comfortable with someone else on the outside.

Earl Wolfe likely won’t make the 53 Man roster as he is running out of Opportunities … Wolfe and Reynolds will need to step it up or most likely be
gone by mid-Summer ..

thurmond lining up as safety at otas

looks like earll wolfe is nursing some injury again and marcus smith has a leg injury……chip had a funny press conference…..he handled the mccoy situation pretty good

HUGE NEWS BRONCOS LOSE CLADY FOR YEAR …..TEARS ACL…..this is the year for somebody to unseat the broncos….I hope it’s the raiders but probally chargers

Clady has missed 2 of the last 3 Seasons I believe..
They are already scrambling at Guard with the loss of Orlando Franklin and Retirement of their Center whose name escapes me…
Peyton “Feet of Clay” is in Trouble…

HAHAHAHAHAH BARBRE at LT…..hell no just put johnson there and move barbre to RT….that would be a terrible oline….hell no can’t do it

Eagles could scoop up RT Doug Free of the Cowboys
Then Shift Lane JOhnson to LT and go
LJ, Barbree, Kelce,Gardner, Free (Still 5 White Guys) and
Bradford, Sanchez would get knocked out by October leaving Tim Tebow to QB
the Team …. Good Grief..

manny ramirez is that his name

yes it was jd walton you are correct

I stopped Smoking,Drinking and even Caffeine (Coffee) for about 4 Months now and my memory is coming back strong… Playing Men’s Softball twice a Week which I haven’t done in about 15 Years…

substituting coffee and alcohol for softball seems like a chip kelly type trade to me. You got fleeced like a sucker

I sure did and miss it, but it was long overdue.. I admit, I feel the best I have in about 20 Years and something I had to do if I want to be around for some grand-kids some day…… Went Cold Turkey on all 3 ..

The eagles are done thanks to chip Kelly

Chimp.. try the monkey bars …all jest aside ..best wishes with your personal demons..and good health to you