Here Are The Starters At Thursday’s Eagles Practice 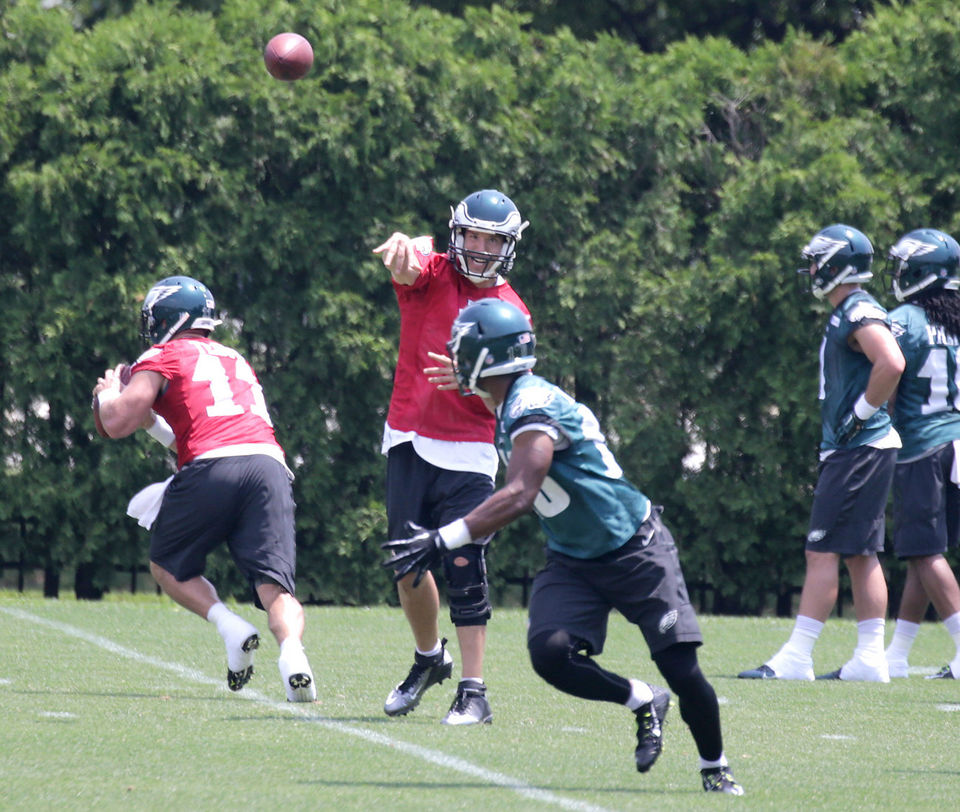 It’s still very early, but I wanted to inform you of who was lining up where during the Eagles first public workout on Thursday.  Sam Bradford, Earl Wolff and outside linebacker Marcus Smith were the three injured players, who didn’t participate in the total workout.

At the quarterback position, Mark Sanchez took the reps with the first-team offense, then Matt Barkley took the second-team reps, while Tim Tebow worked with the third-team offense.  Bradford participated in the individual quarterback drills, but he didn’t do any of the 7-on-7 passing work or any of the team drills.

Eagles number one draft pick wide receiver Nelson Agholor missed Thursday’s practice because he was in Los Angeles for an NFL Players Association event for the league’s top rookies.  In his absence, the Eagles had Josh Huff and Riley Cooper lining at the outside wide receiver position with the first-team offense and Jordan Matthews was lined up in the slot.

We’re all anxious see who will be taking the reps with the first-team when the rookie wide out returns to the practice field on Monday.

At tight end, Brent Celek was the starter with Zach Ertz backing him up with the two’s.

DeMarco Murray was the first-team running back with Ryan Mathews and Darren Sproles backing him up.

The Birds had Allen Barbre lined up at left guard  and Matt Tobin lined up at right guard with the first team offensive line on Thursday.  Barbre, who was supposedly penciled in to take over for Todd Herremans at right guard was playing on the left side, which is Evan Mathis’ position.  So far, Mathis hasn’t come to the OTA’s because he’s in a contract squabble with the Eagles front office.  Nobody knows if he’s going to be with the team this year, but I think the chances are high that he will be playing for the Birds because he’s under contract and doesn’t seem to have any other options.

Tobin is expected to compete for the starting right guard position.  The coaching staff seems to have confidence in his ability, but he’s yet to play with the kind of consistency you need out of a starter.

The rest of the first team offensive linemen were there including left tackle Jason Peters, center Jason Kelce and right tackle Lane Johnson.

On the defensive side of the football, the starting defensive line remains intact with Fletcher Cox, Bennie Logan, and Cedric Thornton.

In the defensive secondary, Nolan Carroll lined up as the starting cornerback opposite Byron Maxwell.  Chris Maragos manned the safety position opposite Malcolm Jenkins on the first team defense.  Walt Thurmond and Chris Prosinski were the safeties on the second-team defense.  Maragos and Prosinski are Special Teams specialists so they don’t have much of a chance of starting.

At The Moment, Nolan Carroll Is The Starter At Cornerback

The Eagles Are Lacking Depth At Outside Linebacker