There Are Reasons To Be Concerned About Eagles Offensive Line 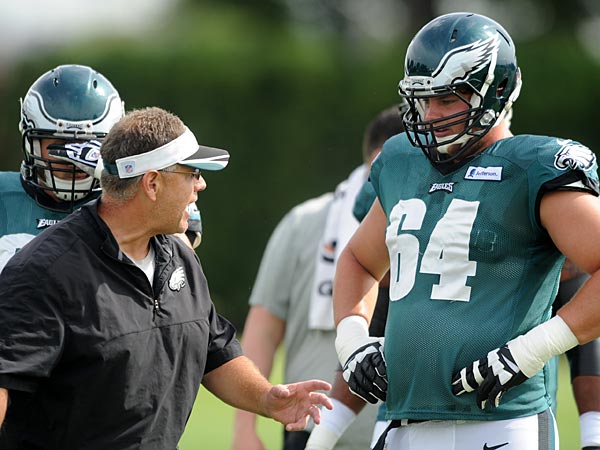 If you were concerned about the Eagles offensive line, I’ve got reasons for you to stay that way.  There have been a number of reports that the Eagles tried to sign former Washington Redskins right guard Chris Chester, but he decided to sign with the Atlanta Falcons.  ESPN NFL Insider Adam Caplan reported that the Eagles offered Chester a two-year contract.

Now what does that say to you as Eagles Pro Bowl left guard, Evan Mathis continues sits out of OTA’s.  The fact that the Birds are going after a veteran guard like Chester tells us they’re not really happy with what they already have on the roster.  It says they would rather replace Mathis with a veteran player rather than some of the unproven young backups they have on the roster.

Right now Allen Barbre and Matt Tobin are the starting guards.  Eagles offensive line coach Jeff Stoutland had good things to say about Barbre when he talked to the media.

“He is a really good player. We have a lot of confidence in him and his abilities.”

Stoutland wasn’t nearly as positive about Tobin, who lost a starting job last year to another backup Andrew Gardner.

“Put it this way”, Stoutland said according to PhiladelphiaEagles.com. “There are areas that I thought he needed to improve in and he’s very conscious of those things. Whenever it rears its ugly head again, we right away jump on it and talk about it and say, ‘You need to keep your hips down and sustain better balance. You need to be more violent with your hands and you need to engage the blocks. You can’t get your hands clean.”

“I think we have a talented group of guards,” Eagles Pro Bowl center Jason Kelce said. “I know that Allen Barbre can play. I’ve seen him play for a couple of years now, he’s a very good player for us. Matt Tobin is a guy who I think was a little bit blue last year, getting his first starts and his first really solid action time. But he’s a guy that has all the tools you want to be successful at guard in this league.”

So there you have it.  The Eagles seem to feel Barbre can step in and do the job, but he been good at times then at other times he has struggled.  That’s why he has been a career-long backup.

I guess they’ll cross their fingers every time the ball is snapped, in hopes that Tobin’s weaknesses don’t appear.  If any of the offensive linemen get injured, it could get ugly.

Zach Ertz: “Every day….. A singular mindset of getting better”

They may have “confidence” in Barbe, but lets be honest. He’s just a guy. 31 year old journeyman. Obv there are problems with Tobin.

All evidence points to Mathis being out of here, leaving those 2 nobodies manning the G spots.

Isn’t the issue an injury? Any injury? And there will be an injury. There always is. What happens then? Who is the next guy up? Scrub city.

2 years in a row tossing 1st and 2nd rounders at the”skill”positions and not the trenches. That’s a Detroit Lions model for disaster..

I’ve been talking about the line as a concrern all off-season…I think this is an area that could really sneak up and bite the eagles in the coming months.

Peters did not play as well last year as he has in the past. Kelce is great getting out to block on screens, pulls and traps, but his size is an issue sometimes in short yardage…the status of Mathis is as murky as ever, and if the eagles do in fact release him you’re looking at two major holes at the guard position.

Barbre didn’t look good at all last year in preseason before going down with injury and I fear the eagles have severely overrated him based on very limited showings in 2013.

Tobin/Gardner/everyone else on this roster shouldn’t be starting.

The OL has gone from the Strength of the Team under Coach AR to now the Weakness of the Team under Chip Kelly..
There is one OL who is trending up and who should improve and that’s Lane Johnson, the rest are trending down and have peaked as far as aging and injuries.. This was a very poor job by Chip Kelly this Off-Season in not addressing the OL for the 2nd Year in a Row which you just cannot do at the NFL Level, relying on UDFA or other Teams rejects is not the way you build a championship Offense or Team…
Stupid, Stupid, Stupid….
Peters or Kelce go down, this Offense is grounded …

This is Kelly’s ony legit off-season in control the secondary was so bad that was a top priority along with losing players at key positions. We took a huge hit with the o-line to try and upgrade other positions. The o-line is at best a steaming pile of dog shit we all know this. Were just going to have to weather the storm until we can upgrade the position next off-season you can’t fix everything in just one off-season.

Paulman this trade would never work. Free is to old and to pricey plus why help the cowbitches I still say if I’m them I trade curry and Kendricks for muhammad Wilkerson it’s a win win for both teams…

Doug Free is 31 Years old and has a $3 Million Salary for 2015?
That’s 2-3 Years Younger than Mathis/Peters and half of what an unhappy
Mathis is costing?
How is this a bad deal for Eagles?
Slide Lane Johnson inside at Guard for a season or two until some Young OT can be Drafted
Do note thatCowboysDrafted RT Chaz Green as Free’s replacement before they had thought about La’el Collins so Free will be available with Teams interested so offer them Kendrick’s and move to get the OL settled
Kendrick’s will be gone after 2015 anyways

Guards are suppose to be a dime a dozen that’s why nobody wants Mathis.. The same way they found Mathis off a trash heap a few years back is the same way they need to replace him. There will be a 100 guards available throughout the next 2 months go find one.

Dipshit , no one is moving a third year tackle taken number four into guard! Your lack of knowledge and common sense is laughable .

Lane Johnson isTalented enough to slide inside andPlay Guard for a Season or Two if need be..since there are few Guards out there, it may be easier together a Quality RT and slide LJ inside to get you best 5 OL out there which Teams do all the time…
Priority 1 is to fix this OL now byCamp Time orbit becomes too late to find a quality OL who can learn the System in limited time..
Maybe these UDFA OL Mike Coccia and Boykin can be fast learners

put the crack pipe down paul!

Bradford better add prayers to The Football Gods to add to the ones he’s sending to the Good Knee Gods.

Offensive lines can make or break a season even if everything else is kosher.

That’s all I got.

This is linked to the draft pick of a linebacker (no need) ,and is what’s so maddening about this coach,organizationally ..Its,a litany of questions yet unanswered .Some seemingly defy logic.As you said ,why protect a China doll ,by allowing a jail break .The word on this QB is he’s skiddish in the pocket and has a habit of being a check down Charlie..best remedy for that always was cut and dry..protect the China doll..priority one ,at least you’d think?

The irony is chip may be right making this move ,but he hasn’t given himself,the organization ,and Sam his full commitment to all that picking Sam, encompasses..Its mandatory he stays clean and feels safe ..if it’s true Sams strength is his quick processing of defenses and formations ,well giving him every split second would maximize those opportunities.And isn’t it his responsibility as GM ,not to let Mathis walk away ,without compensation.You have done that with desean ,and subtracting talent without compensation is poor GM work and it might even might trump ,the coach ..

my guess is he got all that desean was worth…. like it or not, nobody wanted his sorry ass for his contract. I know its a hard pill to swallow but desean is not a highly coveted player. he’s a pain in the ass, doesn’t fit a team mold and wants the ball more than he deserves.. whiny heiny and no one is knocking down your door for him…

Wearing two hats …nobody ever said it’s easy …you asked for it chip..handle it,with aplomb..Sit Mathis old ass down and tell him ..you keep my China doll clean here’s your $$ ,now get back and live up to your quite fair contract…This blink macho stuff ,and rosenhause is BS.

Mathis has a health facility in Scottsdale,he’s just trying to money grab ,as he and his brother know this is there future..

He’s a workout freak ,and he is an upgrade over plan B ,and he’s signed ..and he’s our property..this is rosen hosed..all the way …Mathis wants to finance his business and drews in his ear ..this is coach and GM get played ..

Hac I’m not disagreeing about desean ,just saying without compensation ,for pro bowl caliber players is a bad GM blemish on your resume ..The coach may pay the ultimate price ..

Basically the Patriots, Bengals, Cowboys, Ravens are some the few Teams that have quality Depth across their OL

Wonder if Dennis Kelly can ever emerge as a Starter at Guard..
He’s been with the Eagles for a few years now and has started a handful of games in 2011/2012
If he is that bad, how is he still around under 2 different HC’s