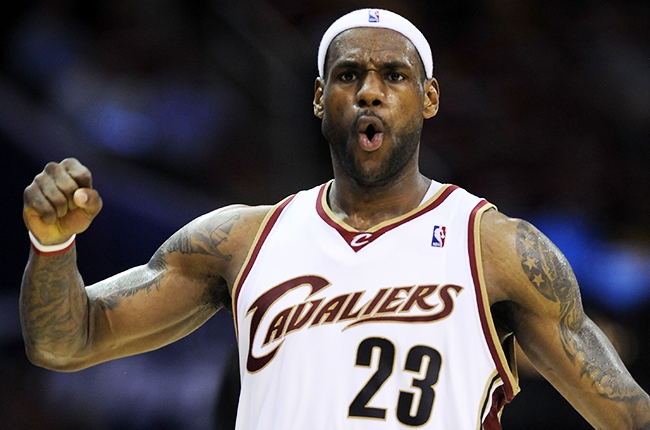 Lebron James will never be Michael Jordan; the comparison is one that I never cared to discuss personally. Different eras of basketball and really different players stylistically, but due to similarities of being able to dominate at their craft, the question of who is the greatest of all time will continue in debate.

What can be compared is the willingness to be “great,” to do everything within your power to make those around you better. People want to scrutinize James for how he talks to the media, giving the details of his injuries, the “team first” speeches and chuckling at his own jokes.

The cameras and people seeking a few minutes of his time to answer questions has been a pattern for more than half his life, starting early in his teens at St. Vincent–St. Mary High School. If you were to listen carefully to the “choice” of words back then and what you hear now, it was always about the team. Keith Dambrot his high school coach made sure Lebron understood it was about the team first and success would follow. There are plenty of superstars looking to take the shot first and make the pass second, Lebron has always looked to get his teammates involve.

With the injuries to Love, Irving, there was little belief that the Cavaliers stood a chance, which made sense when you saw what players remained on the roster in comparison to the Warriors deep talent pool.

James has played at times with his back to the basket like you see a center doing, scoring with hook shots. Other times James is switching to multiple defensive roles to limit the high octane offense that the Warriors “had” been so successful with up until the Championship series. Yes, Lebron is not shooting at a high percentage, but don’t forget the Warriors are a tremendous defensive team, and they can shadow Lebron all game long with really no consistent secondary scorers remaining on the Cavaliers roster.

Head coach David Blatt is nothing more than a cheerleader at this point. He is rooting on the best player in the NBA and non-labeled head coach of the team on a nightly basis doing his very best to not screw things up.

It’s so much more than the stat lines of triple-doubles, it’s about the secondary things and parts of his game that the NBA world has not witnessed before. There are so many moments during the game that make you realize how special of a talent this guy is, and how amazing it would be if he could lead this team to a title.

Even the Lebron “haters” have to at minimum “respect” what he is doing. If you are still feeling the “hate,” I’d really need some clarification for why that’s the case.

It’s Too Early To Panic About Joel Embiid

Jeff the hate is irrational and silly. I look at Lebron much like I did Jordan; a great player whose play I admired, but neither were my favorite player of there time. The silly over the top hating has actually started turning me into a Lebron fan.

Lebron is a beast and a legend but he couldnt hold jordans carry on luggage. kobe and his legend is far superior to lebron. lebrons problem (aside from the fact he is a total unaware tool off the court) is he isnt clutch, has no killer instinct and his jumper isnt good enough and never has been in the clutch. he is an insane talent but not the guy you want taking the last shot

Difference between Kobe and Lebron it this. Kobe would’ve taken 70 shots last night and tried to win that thing his damn self. Killer instinct Kobe has it, Lebron doesn’t.

Bigs I agree that Kobe would have tried to do whatever offensively to win. Kobe’s an assassin. Like him better than Lebron and Jordan. That being said; he would have lost too. Lebron’s supporting cast was garbage. Kobe would have been accused of bullying these jokes (including) the rec center coach.

Both Jordan and Kobe played with better overall teams then Bron has with the Cavs (now there’s no excuse for only 2 titles with Miami) – the only reason Cave were in it was b/c of James being a statistical monster and Della’s inspired play on Curry.

With that said..James is just. not. quite. good. enough. Kobe was an assassin. Jordan same. Bron isn’t that dude. And it’s killing his still developing legacy.

A frankenstein monster made up of Magic, Jordan, Wilt, Russell and Reggie MIller couldn’t have beat the Warriors with the crap that the Cavs rolled out every night.

I think that LeBron takes what the defense gives him and makes his team better. He was in the 30s and 40s every night. What else do you want him to do Big? You take the last shot when you are carrying the whole damn team on your back all night long.

You think my post was being critical of Lebron Bugsy? I think he deferred too much last night but he was gassed, he is a once in a lifetime talent who makes his teammates better whenever he steps on the floor. Crazy thing about the stiffs he was playing with was they were a couple of questionable calls away from being up 3-0 in that series.

The Better,Deeper, Healthier Team Won here, no real surprise…
The Better “Team” Won…
It took Curry a few Games to get his Legs back after the layoff in-between Series but Curry was Clutch in the 4th Quarter these last few Games when it mattered as well as Iggy, No one else on the Cavs was even looking to shoot the ball once in the 4th Quarter, Hell even Lebron James can’t make every shot on every Trip.. JR Reid disappeared late in Games, Shumpert was afraid to Shoot all Series and Delladingy was hot early but Defenses caught up with him to take away the things nad driving lanes that he likes to do..
Once Irving went down in Game #1, this meant that Lebron would have to handle the Ball and Offense most of the Games and especially during Crunch times which caught up with him and the Cavs..
All in All, a Pretty good Series with some good Games
2016 Season will be Wide Open for the Top 6 Teams of So
76ers are 3-4 Years away from contending

who is jr reid? do you mean jr smith? if yes, he didnt disappear late, he was invisible all quarters all games except 1

It’s Hot out and nothing to talk about for the next 2 Months
It’s Sports for crying out loud…These Playoff Series are like the NFL where the pendulum Swings every Game …
I had no vested interest in either Team in this Warrior/Cavs Final
Cavs started Strong but were outplayed in crunch time for the 3 last games of the Series.. LeBron Played his ass off but it wasn’t enough for the Warriors were the better Team which we all saw the last 3 Games….
Who cares what I think or called or stated after game 3 of the Series or game 4 of the series or game 5 of the series… Means not a damn thing to me…

LJ is Cementing his Legacy as one of the All-Time Greats Players by putting the Cav’s literally on his back, while en-route to their 1st Championship… Good for Him, Good for Cleveland and Good for the NBA…
Golden State still not Mature, Experienced enough to Win it All, though they are a very exciting Team to watch and will be legitimate contenders for the next few years to come and hopefully can win a couple games to make this a Close Series.. I say it goes 4-2 the Cavs

And the Lebron has no Killer Instinct theory is ridiculous and has been proven wrong. Seriously its like people only read box scores….because Im sorry damn sure can’t be watching basketball.

I understand not liking him as a person. But from a pure basketball perspective….Hes the best player this league has seen since Jordan.

Henski, I pride myself in digging deep and finding frauds flip flops… This is a great one kudos to you!

Porzingas to the Sixers at no.3 is the hottest rumor of the draft so far…..

I still think its Hinkie trying to get the Magic or Kings to move up to the 3rd pick and swapping for another first next year. Especially since we have yet to hear a peep about Embiid…..this just smells of a smokescreen.

I could give a Rats Ass on who won the NBA Series.. Early on it looked like the Cavs were going to Win but the Warriors were the Better Overall and Healthier Team… Good for them…

‘I could give a rats ass…early on…” Blah blah…you speak in absolutes. When doing so and then you flip flop it’s ridiculous.

Fraud, your flip flopping ass has had a few bad days recently… Lots of dudes catching your lies. You NEVER have the right to say ‘as I predicted” because you always predict both sides.

As long as it was a competitive series, I was happy on whichever Team won…
I like the Young Warriors for they are exciting to watch and for Cleveland it would have been their First Championship in any Sport in a very long time ..
As far as Lebron James having anything to prove as far as Basketball goes,
that’s hogwash, He’s the NBA’s Best Player bar none..which doesn’t mean I have to root for him or against him.. I like the Underdog which on paper would have been the Warriros if both Teams were 100 % Healthy, but that was not the case and was too much for LJ to carry his Team for an entire Series which is just too much to ask.. Onto the 2016 Season

actually i get a kick out of fraud until he says ‘as i predicted’ or ‘as i said’… because he always says contradictory things.

D’Angelo Russell “killed it” at his 76ers workout on Wednesday, according to a 76ers team source.
“He was talking about how excited he was about Philly,” the source said. Russell has to be excited about the idea of getting significant playing time with the 76ers right off the bat. From a fantasy perspective, Russell’s best landing spot is easily in Philly, where they will run an up-tempo style, allow him to shoot treys and get big minutes.
Source: Philadelphia Inquirer & Daily News
Jun 17 – 10:18 PM

Once Russell found out that 76ers are moving to Camden,NJ
He said no thanks ….