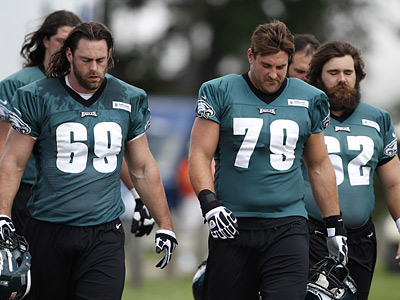 Former Eagle and now Indianapolis Colts guard Todd Herremans called into Anthony Gargano’s Morning Show on 97.5 The Fannatic this week, and he gave us his take on the release of Evan Mathis.  I listened closely to what he had to say because if there’s anybody who would know what was going on behind the scenes it would be Herremans.

He played the right guard position on the offensive line for Chip Kelly and offensive line coach Jeff Stoutland in the 2013 and part of the 2014 seasons.  He knows all of these coaches and these offensive linemen personally.  The veteran understands why Evan Mathis might have made a mistake by missing the entire offseason and these OTA’s.

“That’s a whole mix of guys that are new to each other.  If he’s going to sit around and wait for Evan to get back, he’s going have to plug Evan back in there. which isn’t fair to Kelce and Peters who have been working with these other guys all off-season.”

“You can’t sit there and beg guys to show up or hinge on the fact they might come.  That’s the way it’s always been, if guys weren’t at minicamp or at training camp, you have to be next man up and you have to try to become the best team without that person there.  I think they’re approaching it right.”

Not only did Herremans think the Eagles did the right thing in working as if they had to go on without him, the Colts guard believes Mathis made a mistake in not showing up for Chip Kelly’s OTA’s.  If he had been here Kelly might have listened to his complaints of them taking the million dollar raise off the table.

“I think it’s unfortunate for Evan.  He kind of brought it on himself by not showing up.  We expect them (NFL teams) to stick to the contract that they offer us, and they expect us to do the same. If you’re going to violate some of the things that are expected of you, then you have to able to deal with what comes next.”

Kelly was definitely bothered by Mathis not coming in for the OTA’s.  He wants everybody with their mind focused on getting better and finding ways to win.  He doesn’t want his guys focused on their contract.

Herremans says the fact that he and Mathis were sidelined last year with injuries allowed Kelly and Stoutland to gain confidence in the backups at the guard positions.  Replacing both guards in one off season.

“Just the fact, that the Eagles depth got so much action last year and playing time, I think that had to make them feel a little better about doing that. He’s know’s he’s got Al who can play, and Tobin can play, and Gardner can play.  Given a chance to start they can become starting guards in this league.  From the outside looking in, it’s a tough move.”

Herremans concludes that he and Mathis hurt their own standing with the Eagles by giving Barbre and the young guards a chance to show what they can do.  It convinced Kelly and Stoutland, that they can move on without the veterans if they need to do so.  We’ll be able to see if Kelly and Stoutland were right in evaluating that a combination of Barbre, Tobin and Gardner can get the job done at the guard position.

Tra Thomas: Eagles Are Better On Left Side Without Evan Mathis