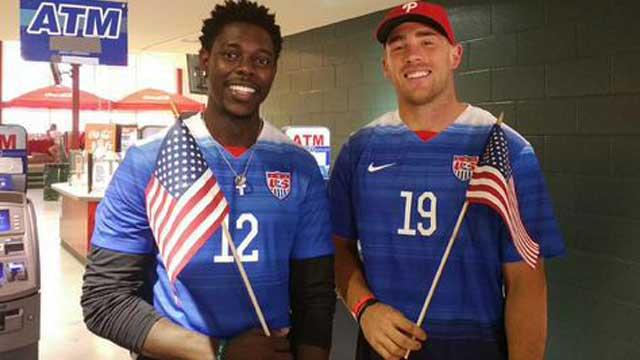 Eagles tight end Zach Ertz tweeted out a picture of his girlfriend Julie Johnston, who will be playing tonight for the U.S. Women’s Soccer team as they battle Germany in the semifinal of the World Cup, tonight at 7pm on Fox and NBC Universal.

Ertz, who has been focused on finding a way to take the Birds starting tight end job from Brent Celek, has become a soccer fan after meeting Johnston, who is a defender on the U.S. team.

“I was there with my buddies and saw her sitting in the student section,” he wrote in his blog, “and just decided I wanted to meet her. So I went up and sat right next to her. We just hit it off from there. We hung out a few more times and after that, we just decided that we were going to be together. That was that.”

Johnson will probably be hanging out with former Philadelphia 76ers guard Jrue Holiday, whose wife is Lauren Holiday, a U.S. midfielder.

NFC East: Who Is Replacing DeMarco Murray In Dallas?