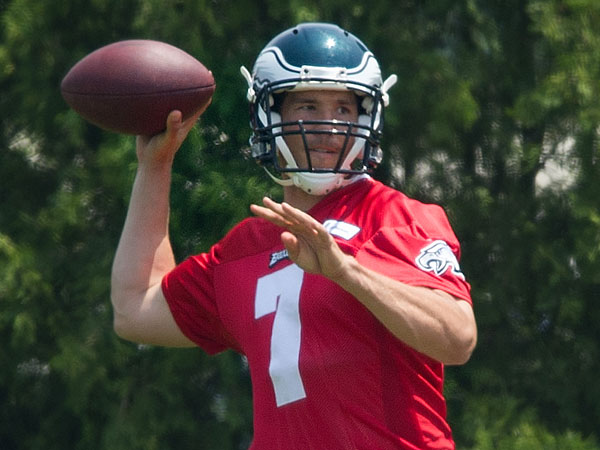 In two and half weeks, the Eagles will open training camp and we will be sitting on pins and needles as Sam Bradford prepares for the season by playing in some preseason games.   Every time he gets hit, the whole city of Philadelphia will be holding its breath.

I never saw his injury history laid out like they did on Eagledelphia.com.  He has been hurt in each year for the last five seasons.

Check out the list of injuries that were highlighted by Eagledelphia.com.

You seriously have to ask yourself, if Bradford has a body capable of dealing with the pounding of the NFL .

After looking at this injury history, it will be good news if Bradford makes it to training camp without getting hurt.  How could we be serious about believing Bradford isn’t going to get hurt this season?

NFC East: Dez Bryant Guarantees No Show If No Contract

I have never liked Bradford Chances at the NFL for this very Reason G-Man
Eagles and Chip Kelly would have been so much better off in 2015 by simply keeping Foles and that 2016 2nd Round Pick and let the 2015 Season play out between Foles and Sanchez and used that $$$$ Savings from Bradford Contract to either Pursued a Safety, or Guard or Resigning Key Players to long-term deals like Fletcher Cox,Michael Kendricks, etc,etc
Foles also has a past with Injuries but at least he knew the System and could toss the Deep Ball better than Bradford.. Bradford is no more of a Running Threat from the QB position that everyone keeps saying that Chip Kelly Offense needs than a Nick Foles or Mark Sanchez is , so that old tired prerequisite is out the window.. I believe Manrk Sanchez opens the Season as Starter, then Bradford comes in by week 4 or 5 and plays a few weeks and then get injured with Sanchez coming back in as the Starter to finish the Season… There will be more questions about the Eagles Future QB after the 2015 Season, than there were going into this Off-Season which was a huge mistake by Kelly in my opinion and one he may not recover from..