Sam Bradford Takes All 1st Team Reps: “I learn best on the field, getting reps” 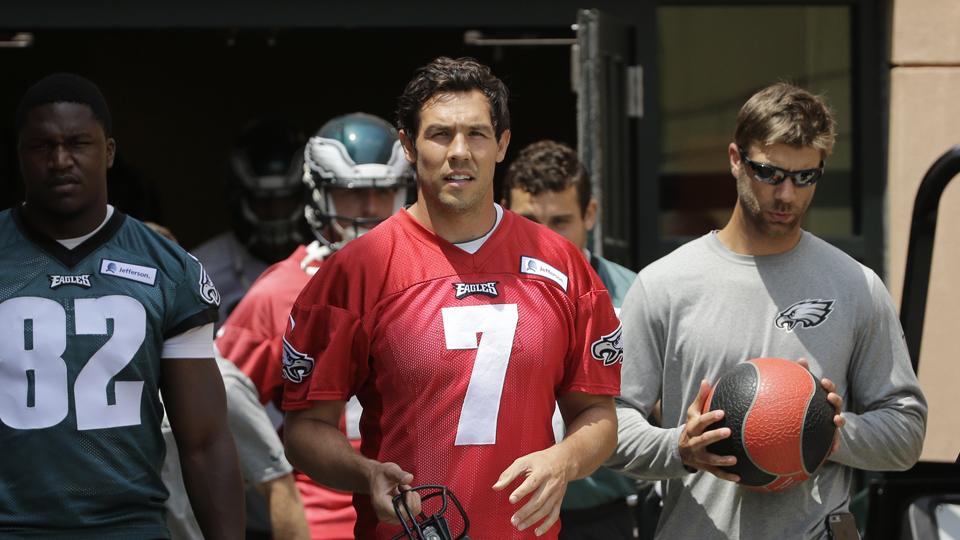 As you would expect, Sam Bradford thinks he will be the team’s starting quarterback in the second week of September and he took all of the first team reps today.  Bradford paused before answering a question about whether he expected to start in the season’s first game on Monday night in Atlanta against the Falcons.  He knows there’s no guarantee of being there, but it’s time to get to work.

He eventually responded, “Barring any major setbacks or anything, I feel great about that,” he said.

“It was good to get back out there,” Bradford said. “It’s been a long time since I was part of team drills. Almost a year now. Getting adjusted to the speed again (will take time), but I was just happy to play football again.”

On Tuesday they’ll put on the pads, but the quarterbacks will still be in the red shirts and therefore not to be touched.  Bradford will continue to feed on those reps, then he’ll be corrected each night during the meetings.  Offensive coordinator Pat Shurmur will go back through each play and get into each and every adjustment and decision he makes.

Football isn’t played in the cognitive part of your brain where you sit and think about a decision, then make it.  The decisions during a play in a football game are made in split seconds and they have to be done instinctively based on muscle memory.

That won’t be the case in the preseason games, which will really be another test for Bradford because he’ll face somewhat of a NFL pass rush.  He’ll get the chance to stand in the pocket with big 300 plus pound men falling around his legs, yes around that injured leg.  Bradford has to maintain his focus downfield and deliver the football.

Bradford is not wearing a brace, but he’s still dragging that leg a bit, when he runs.  It will get stronger and stronger as he works it.  He’s definitely making progress, but he’s got a way to go.

It’s all about the reps for Bradford.  He needs to come to the line of scrimmage, read the defensive front and coverage, then run the play and react to what he sees.  He needs to do that as many times as possible before that first regular season happens.  That’s why he took every first team rep.

“Each day I’m out here I get more comfortable. In the past six weeks from when we broke OTAs, I’ve put in a lot of work,” Bradford said. “The things that I did during that period were things that are required on the football field. I’m sure when we get into preseason games and it’s real, that will be another step.”

I thought he was fairly sharp.  Most of his throws were on the money.  Bradford started the workout with a nice throw to Josh Huff down the middle on a curl route.  Huff was in there with the first team offense along with Riley Cooper and Jordan Matthews.

Bradford did have one of his throws picked off by Nolan Carroll.  It was an inside throw and Carroll beat the receiver inside and attacked the football.  It was an impressive play by Carroll, whom the coaches have been raving about all off season.

The offensive line in front of Bradford are Jason Peters at left tackle, Alan Barbre beside him at left guard.  Jason Kelce mans the center position.  At the right guard position is young Matt Tobin and next to him at that right tackle is Lane Johnson.   I won’t make any assessments of what’s going on out there with the big guys until they put the pads on on Tuesday morning.

Eagles third down back, Darren Sproles got a lot of work today.  He had quite a few plays with the first team and he carried the football quite a bit, which was really surprising.  They gave the ball to him on sweeps and inside runs.  I would imagine it has something to do with Sproles’ familiarity with the offense.  Both DeMarco Murray and Ryan Mathews are still learning the offense.