It Was An Outstanding Day Of Practice For Sam Bradford 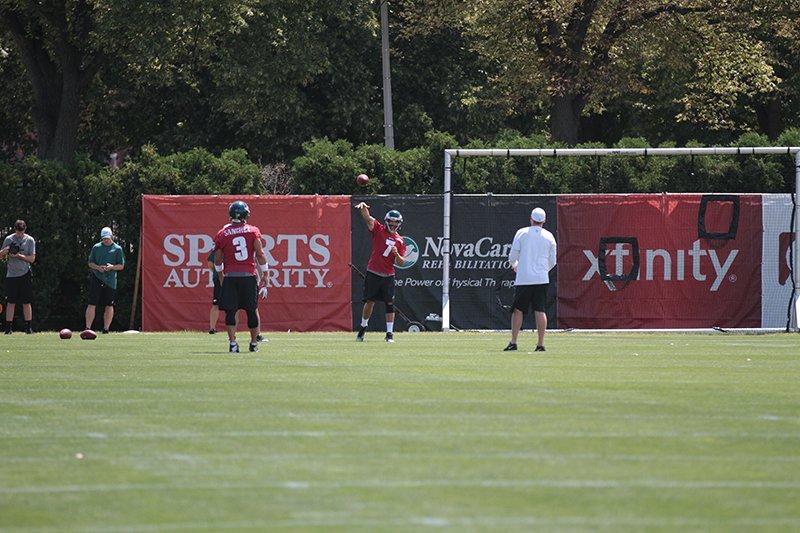 Eagles new signal caller Sam Bradford was especially sharp and on the money with his throws yesterday at practice.   He was like a machine with so many passes completed and they were right where they needed to be.  I also like the intensity with which he’s working.  Even on his first day, you can see that he came out here to work.

You can also see at the end of the practices, his leg is getting fatigued as you would expect, but he’s making it a point to lift it and push it, which is the only way you come back from these types of injuries.  I know it was sore from all the work he put on it on Sunday, but he’s pushing it and the entire city of Philadelphia is watching.

Back to his performance yesterday, I like the way he can accurately makes those outside throws and he puts the ball on the money. Bradford has the confidence in his arm to get the ball there and he let’s it go.  The sixth quarterback throws an accurate ball that is very easy to catch because it’s not too hard, but it has a nice zip on it.

Bradford must have hit Jordan Matthews 10 times on perfectly placed throws yesterday. He hit Matthews with a beautiful deep throw yesterday for a score.  The second-year wide out was going down the right sideline and Bradford dropped over his left shoulder into his bread basket about 40 to 50 yards downfield.

On one play, Matthews was running 10 to 15 yard out route and he had his man beaten, so Bradford put the ball right there.  Matthews let the ball go right through his hands.  He missed the ball so badly that the pass seemed to not even touch his hands as it went through them.

Next play, Matthews was lined up in the slot on the right side of the formation and Bradford got the snap and hit the second-year wideout on a curl route to let him know I still believe in you and I have no problem coming to you, when you’re open.  You can see that they have a chemistry.  Both of the players must have a confidence in each other to succeed together and that clearly is forming and growing with Bradford and Matthews.

You don’t see Bradford straining on throws.  Every throw seems to be made effortlessly.

Matthews caught quite a few passes from the other quarterbacks yesterday as well.  He was getting open and he was catching the football. The big young receiver is working hard and looking great.  I wasn’t counting but he caught a lot of passes yesterday.

Mark Sanchez didn’t have as good of a day on Monday as he did on Sunday.  Sanchez was the best quarterback on the field on Sunday, but you couldn’t say that yesterday.  I don’t know that all of it was his fall, but there were a lot more of his passes on the ground.

Matt Barkley is having a good camp so far. He gets the ball out of hands quickly and he’s been throwing the ball accurately.

Tim Tebow is throwing the football well and when he pulls the ball down, the guy runs like a running back.  He hasn’t connected on anything deep, but his accuracy was very good yesterday.

The quarterback play has been much better at this Training Camp than it was during the OTA’s and the mini-camp as you would expect.  These new guys, Bradford and Tebow are getting comfortable in Chip’s offense.  A lot of the Eagles passing game is the west coast offense.

It’s good to hear/read about .. Bradford will have his ups and downs these first couple of weeks as he finds his rhythm and timing in the Offense and with new Receivers.. The fact that he can get out there on back to back to back days is a good sign and something to watch as Camp moves forward…
There may be a day or two or session or two they hold him out to not overwork his knee, but for now, its push, push, push as he rounds into Football Shape
On a side note, Matt Barkley has started out Camp real well per all observor’s and if he continues to progress may end up being a Trade Chip to a Team in Need of a Back-Up around the NFL where he can return a 6th Round Pick as long as Tebow continues to improve as well…

Philly Voice’s Jimmy Kempski believes Jordan Matthews is “going to have a big season.”
Matthews “destroyed” practice on Monday, racking up “catch after catch after catch” as the “best player on the field.” Kempski went on to say the second-year wideout has star potential. A more athletic version of Marques Colston, Matthews is underrated everywhere except in fantasy circles. He’s a fine late-third or early-fourth-round pick.
Source: Philly Voice
Aug 4 – 8:45 AM

Reports from Ed Werder of ESPN that the Eagles & QB Sam Bradford are in Discussions about a Long-Term Deal..

Well he did have a good practice yesterday….

short term deal (for now)…not long. I still believe they need to let him get some games under his belt and see if he can make it through training camp before they sign him to anything.

Hearing a 3 Year Extension at $52 Million with $25 in Guaranteed $$$$
A Big Risk for Eagles, but if he Remains Healthy and Plays well, then a Great Deal for Eagles

30-58-1, has played 7 games in the last two seasons, has a lengthy injury history dating back to college, and has not played back to back seasons since high school. I say what’s the rush….just wait and see if he can take some hits and play well.

eagles arent signing him. theyll let him play this year and franchise him if they have to. this is just a PR leak to get the city and writers to go rah rah about sanchez kinda like gary did in this article.

rah rah about bradford that is

One day of practice and we are stating that the QB position is solid? interesting…18-30 means something.

yup just as he did with sanchez mid season last year….it all circles back to mike vick…

Oh rgme cant keep his cocky little mouth shut……” if they want me to be ordinary I ll be ordinary” fool you do know you are soft and fragile as duck butter, ordinary means beingba real qb then yes i guess tom brady and peyton manning,are ordinary….I cant stand this guy….think he is something special

I feel like Bradford has attempted maybe one pass over 10 yards in the first 3 days. Part of that is design tho. #Eagles

Bradford just fumbled a good snap in the shotgun, the badly overthrows his WR on the run. #Eagles
18 retweets 9 favorites

Bradford with a bad throw. #Eagles

I read that about the short passes. Its what Bradford does. As I stated 1,000,000x after the trade, Bradford has the 2nd lowest yrds/att in the league over the past 5 years, surpassed only by Alex Smith.

All Bradford does is throw short.

Now, Kelly’s offense is predicated on the short throw, which is why he probably preferred Bradford to the deeper throwing Vick and Foles.

Can a passing offense composed primarily of screens and 5 yr hooks work long term in the NFL as it does against the McNeese States of the world?

Analysis: With Bradford, it almost always starts and ends with his health, which makes Tuesday a good day for the team’s starting quarterback. Bradford practiced for the third day in a row, and looked healthy, rolling out a number of times on his twice-surgically-repaired knee.

The bad news? Outside of his health, he didn’t look so great.

Bradford’s worse sequence of the day came during 11-on-11 drills, when he fumbled a perfect snap in the shotgun. On the following play, Bradford handled the snap, rolled out to his left and badly missed his intended receiver.

The quarterback is playing just fine, hasn’t turned the ball over and is taking what the defense is giving him. He did that again on Tuesday, but has yet to really have a “wow” moment through the first three practices.

Ball security is crucial for Sanchez. But if he is going to win the fight against Bradford, he needs to knock him out — and Sanchez, who isn’t getting many first-team reps — hasn’t even really thrown a punch.

Analysis: Tebow didn’t get many reps on Tuesday, perhaps the result of the Eagles practicing at the Linc and having less space. Tebow attempted only 11 passes, handing the ball off the rest of the time.

He did make the most of his 11 pass attempts, however, and nearly had a long touchdown pass, but the ball was dropped in the end zone.

Tebow had one nice scramble, holding the ball and taking off for about a 15-yard gain.

Analysis: After a strong start to camp, Barkley has slowly taken a step back each day, and he struggled mightily on Tuesday.

Not only did Barkley have more incompletions than completions, which is difficult to do given the short passes ib Chip Kelly’s scheme, but Barkley badly overthrew one of his only shots down the field.

During a team drill, Barkley had a receiver open, but missed him, resulting in an interception by safety Chris Prosinski.

Barkley is arguably a long shot to make the roster, but if he has any chance, he is going to have to play better than he did on Tuesday.

Its going to be a Work in Progress on the Offense regardless of who is QB
There are 3-4 New WR’s, 2 New Guards, and 2 New RB’s .. Defense typically has the Edge the first 2 Weeks of Camps in Basic 11 on 11 Drills until the timing, fine tuning of routes and overall Ryhthm of OL, QB & Receivers all working in tandemn which takes Reps, Reps and More Reps to Occur..
As long as Bradford is able to go out each day and get a little strong, a little more confident and a better understanding of the Offense and build a rapport with his new Teammates is about the only positive to build on these first couple of weeks.. The fact that he hasn;’t had swelling or a set-back with his knee is the biggest news so far and they still need to be a little careful on how may reps and movement he’s doing here at the Start of Camp
It’s all about all the Players getting into “Football Shape” .. so expect some Sloppy play, leg heavy, inaccurate passing days, drop passes for that’s what happens over a 5-6-7 Week Summer Camp..

Lets see what happens in the Games.

Bradford (when Healthy) is more of a Franchise QB than Nick Foles was and is a better passer than Sanchez. (I was a Foles Guy)

Being Negative about things allows people to gain cheap credibility….Example-
Radio Hosts complain about the team not being able to in a Superbowl in an upcoming year. Guess what? They have HUGE odds of being right regardless of talent because only ONE TEAM WINS A YEAR. The other part is that if they predict doom and things go well people are so happy to see success they don’t remember / care about the preseason gloom.

I am going with a Hopeful Outlook that Bradford will play well and this team will be 14-2 making Bradford 32-32-1 for his Career prior to entering the Playoffs. this year. (Why not)

Sign him to a three year deal now taking him to age 30 and allowing for a deal from 30 to 35 for big money.

Almost Forgot-MM8TENN (still as out of reach as in March)

Hmm Looks like some of us know/knew something and others talk out their 4th point of contact.