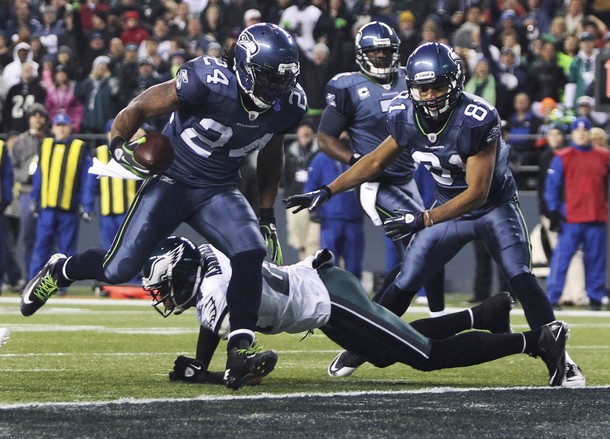 The Seahawks were one yard and one horrible play call away from picking up their second straight Super Bowl Championship. The decision to not put the ball in the hands of Marshawn Lynch is one will live in infamy throughout NFL history.

Seattle will now try to avoid the Super Bowl hangover, and pick things up where they left off. Their biggest splash of the off-season came when they made a trade with the New Orleans Saints to bring elite tight end Jimmy Graham to the team. Graham instantly becomes the Seahawks best receiving threat, and while its hard to expect him to put up the same numbers he had playing with Drew Brees, he could help Russell Wilson set career-high’s across the board.

The problem is that in order to bring Graham in, the Seahawks had to make some sacrifices on the offensive line. Center Max Unger was sent the New Orleans in the trade, and guard James Carpenter signed elsewhere in free agency, leaving the team with several holes to fill on the line.

The Seahawks are still an elite team in the NFC, but their window may be starting to close. Contract issues are already beginning to take a toll on the franchise, with even more issues to arise in the following off-season. The addition of Graham is exciting, and the defense is still a top group in this league, so for the time being, the Seahawks should have at least one more great run in them.

You have to give Arizona head coach Bruce Arians a world of credit. He’s done a heck of a job with the Cardinals in his first two years, getting the absolute most out of a team with some significant holes and mediocre talent.

Carson Palmer is expected to be healthy to start the season, and if he’s able to keep himself upright then the Cardinals could really get the most out of their potential. Palmer appeared in just six games a year ago.

Arizona went out and landed guard Mike Iupati in free agency, and drafted offensive tackle D.J. Humphries in the first round to bring a significant upgrade to their offensive line. The upgrades on the line should help protect Palmer, and create more holes for explosive running back Andre Ellington.

Larry Fitzgerald is still the face of the franchise, and is still capable of being an effective receiver in this league. But playing with the likes of Drew Stanton and Ryan Lindley really hurt his numbers last season, making it all the more important that Palmer stay healthy.

The Cardinals lost several starters on defense, including cornerback Antonio Cromartie, linebacker Larry Foote, and tackle Dan Williams. The team still has elite young corner Patrick Peterson in their secondary, and also drafted linebacker Markus Golden in the second round.

Arians has done a great job in the desert, and while there should be good improvements on the offensive line combined with a healthy Palmer to make the offense much more potent, Arizona just doesn’t have enough to close the gap between themselves and the Seahawks.

Jeff Fisher hasn’t had better than a seven-win season in each of his three years with the Rams. He’s been trying to build the roster up from the ground up, and has had to play two of those three years without his starting quarterback Sam Bradford, who finished both years on injured reserve.

Fisher and the Rams finally pulled the plug on the Bradford era, sending him to the Eagles for Nick Foles and a second-round pick. It’s a low-risk, high-reward move for the Rams.

St. Louis was clearly tired of depending on Bradford to stay upright, and would rather take a shot on a younger quarterback like Foles. Foles regressed in 2014 with the Eagles, and will now be playing with lesser weapons in a less quarterback-friendly system, but he’s still a very young quarterback that is better than a lot of other options out there.

The Rams still offer mediocre receivers, with veteran Kenny Britt likely serving as their number-one option. Brian Quick and Tavon Austin are the second and third options. There isn’t a lot of consistency at this position.

The team spent their first-round pick on running back Todd Gurley, whom they help will finally bring some stability to the running back position that they’ve lacked since Steven Jackson departed.

Jeff Fisher has done a very nice job building the St. Louis defense. The starting defensive line is made up of four St. Louis first-round picks, including Robert Quinn who led the team 10.5 sacks. The secondary is also comprised of players that the Rams have brought into the league, three of which were taken in either the second or third round. The only starter that wasn’t drafted or originally signed by the Rams is linebacker Akeem Ayers.

The Rams are at a crossroads in the Fisher era. There’s only so long that the veteran coach can finish with six or seven wins and point to the strong division as an excuse. With the 49ers in a freefall, the Rams need to at least finish third this year for Fisher to continue building this club.

Chaos. That’s the word that best describes the last year for the San Francisco 49ers.

It began at the beginning of last season, when there was heavy talk of rifts between head coach Jim Harbaugh and the front office. Despite Harbaugh leading the team to three straight NFC Championship games, and one Super Bowl appearance, management had  made up their mind that they wanted to get rid of the very successful coach and fired him at the end of the season.

Since then, the roster has also completely fallen apart.

Star linebacker Patrick Willis announced his retirement, leaving the defense without their heart and soul. Offensive lineman Mike Iupati bolted for Arizona in free agency. The team also lost starting corner Chris Culliver, linebacker Chris Borland, as well as wide receiver Michael Crabtree and running back Frank Gore. And to top it all off, star pass rusher Aldon Smith was released after yet another off-field incident.

The news doesn’t get much better for the remaining players. Quarterback Colin Kaepernick has been a major disappointment over the last two years, and has regressed considerably. the team added Torrey Smith to team with Anquan Boldin to upgrade the receivers, but in a division with such strong corners they may not make much of a difference.

The team added veteran defensive tackle Darnell Dockett to the defensive line and hopes to get linebacker NaVorro Bowman back healthy to give a once-proud defense a boost.

The 49ers were already in decline before the losses in personnel began, as shown by their 8-8 finish a year ago. With all of that talent subtracted, they could sink to the bottom of this division. Their window of opportunity has slammed shut, and there’s not much optimism for the coming season.

Sam Bradford Wants To Play And He Needs To Play