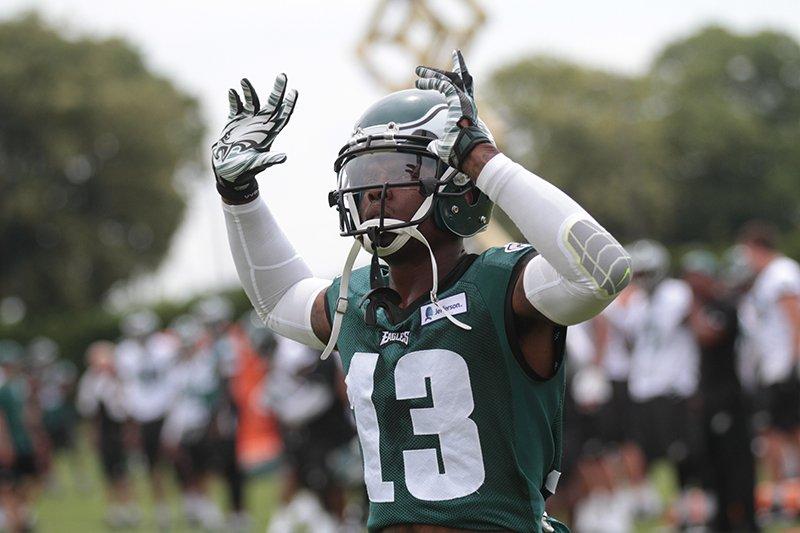 Yes, you read that right, he said that Josh Huff is the best wide receiver on the Philadelphia Eagles roster.

I was stunned.  I was shocked because this guy who said this knows NFL football and he knows NFL wide receivers like the back of his hand.

Yes, Huff has been catching a lot of passes during the training camp and he does have big play speed, but what about Jordan Matthews and Nelson Agholor.  I’m going to be watching Huff very closely for the rest of the camp and during the preseason games.

I do admit that Huff has improved a great deal and I think there’s a good reason for the improvement.

Your teammates know you better than anybody else.  I’ve said this before that Byron Maxwell has brought something to this team from Seattle, that they needed and still need more of.   He knows how to practice.

You’ve got to go hard against each other if you want to get better.  You can’t go through the motions, then expect to take your game to another level on Sundays.  You’ve got to go hard during each play in practice to the point where you’re almost ready to start fighting.  You must have the mental discipline to refrain from fighting, but you feel like fighting.

Eliot Shorr-Parks of NJ.com takes us into the battle between Byron Maxwell and Josh Huff.  I’ve been intrigued by the battle that has been going on between these two all training camp.  They have been making each other better.

Going after each other with holds barred.  Pushing the envelope.

More of this team needs to learn to push each other.  That’s the way you get better.

I personally don’t think Huff is the best receiver on the team right now.  I would say that Jordan Matthews is that guy.  He’s bigger and can make plays on the ball even when he’s covered.  I’ve seen Huff catch the ball, then get stripped of it and that bothered me. He made mistakes like that a year ago.  I think he’s improved tremendously, but I don’t think he’s there yet.  I will keep you posted on Huff.

We will find out if he has improved and just how much. My main concern with Huff is him holding onto the ball.

DeMarco Murray not practicing at all today. Report Malcom Jenkins ran to the tent and grabbed folding chairs placing them in front of him and the others not practicing as a joke.

This is getting alarming

This is a bunch of bullshit Huff is going to return kicks, and have a hard time not fumbling them, and that’s about it.

Football’s back, getting ready to go to Sunday’s game.
Is Cooper still 1st team? Is Huff excelling playing Cooper’s left WR position like most of his reps came from last season.
Is Matthews starting from the slot like last season in 3 WR sets then bouncing outside in 2 WR sets or has he taken Maclin’s position fully? Where is Agulor getting his reps at?(is it at Coopers stop, Maclin’s spot, the slot position)?