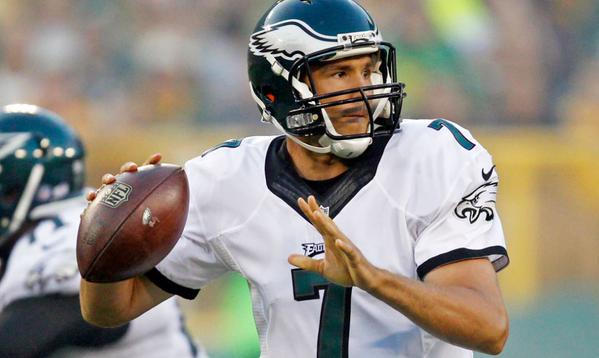 It was Chip Kelly’s running game, that set him apart from other head coaches when he was at Oregon.  His running attack featured the read option and zone option concepts, which utilized the quarterback in the running scheme.  Of course the no huddle tempo was also a key aspect of his offense. Now he has added to that Oregon Duck offense many passing game elements of Bill Walsh’s west coast offense with the short routes and timing aspect of the quarterback’s release .  Like the 49ers quarterbacks, Kelly’s quarterback’s are able to get the ball out of his hands immediately.  If they can process the information through their progressions, they can get the football out of their hands and avoid taking hits.

When the Niners got in the red zone, it was “go for the money”, immediately.  We’re starting to see that with Kelly in his play calling.  Once the Eagles got to the red zone against the Packers, they were trying to score a touchdown on the next play.  The north and south running styles of DeMarco Murray and Ryan Mathews are key weapons for the Eagles to employ in the red zone.  Zach Ertz will be a key weapon as well.  Trey Burton is doing a nice job of stepping in for Ertz, while he’s recovering from surgery.  Burton caught two touchdown passes on Saturday.

Years ago Walsh would script those first 15 plays for his offense. Kelly seems to have his 50 initial plays ready to go, when the game starts.  That barrage of offense in the first half, which we saw by the Eagles, made me think of those 49er teams because many times they came out with that type of flurry.

Kelly’s offense is becoming more and more of a monster because it stresses a defense in many ways.  The hurry up aspect eliminates the defenses ability to substitute freely.  A defense can’t get very complicated with their scheme against the Eagles because the Birds don’t give the defense enough time to get the defensive call to all of the defensive players.  Many times the defense winds up playing the same defense play after play because defensive coordinators know that miscommunication will kill a defense.

You know Kelly is falling more and more in love with Bradford as he puts together more performances like the one he had on Saturday, but Kelly still would love to have that athletic quarterback to help fuel his running game with those read option fakes.  An athletic quarterback like Marcus Mariota, or Russell Wilson would tie up at least one, maybe two defenders on the back side of each running play.  These are guys you don’t have to block.

These defenders who are worried about the quarterback keeping the ball after looking like he was handing the ball off to the running back, don’t have to be blocked. This allows Chip to have one to two double-teams at the front side of the running play.  It’s all about numbers with Chip.

You already know how much Chip Kelly loves the quick screen.  It’s one of the reasons he likes Riley Cooper.  Cooper is a big receiver, who does a great job of blocking on quick screens.  Most of the time, Cooper who weighs over 220 pounds is blocking a cornerback, who is barely 200 pounds.  It’s in open field and it’s a very difficult play for the defenders.  A good block can add ten to fifteen yards to the play.

They’re already let us know that they’re going to be lining up players all over the place.  Walsh and the Redskins Joe Gibbs were offensive coaches who first mastered lining up players at different alignments.  In the Eagles offense this year, you will see wide receivers lined up inside and tight ends and running backs will be lined up outside.  You won’t be able to assume where the Eagles players will line up.  We’ve already seen that with Sproles, but we’re going to see it with Ertz and Mathews, as well.