Reports: Eagles Cutting Down To 53, Tim Tebow May Be A Casualty 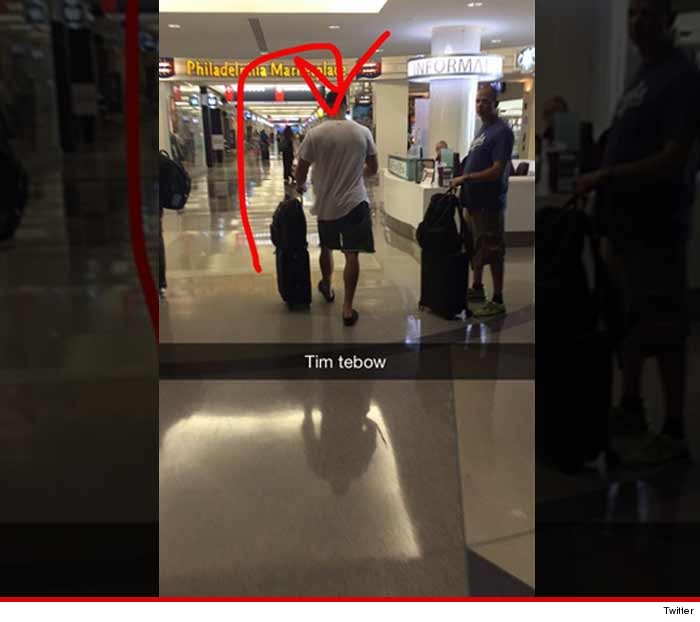 The Eagles have to be down to a 53-man roster by 4pm today, Saturday September 5th.  The blade has been swinging viciously because the clock is moving and headed to 4pm.  There have been reports that Tim Tebow may be released by the Birds.

There was a report that he was seen last night at the Philadelphia Airport with his luggage.  In fact, TMZ.com put a picture up that has Tebow with his back to the camera walking through the airport with his luggage. According to TMZ.com, they reached the Eagles and were not given a status of Tebow’s status with the team.  Let’s put it this way, it doesn’t look good for Tebow.

In addition, there have been reports by Brandon Lee Gowton on BleedingGreenNation.com, that the Eagles have been making calls in search of another quarterback.  They wouldn’t be looking for another quarterback, if they had three on the roster that they were happy with.

I'm getting many indications Tim Tebow is among the cuts by #eagles. Chip Kelly looking for QB and possible OL help.

Of course you know that yesterday the Eagles traded quarterback Matt Barkley to the Arizona Cardinals for a seventh round draft pick in 2016.

According to Howard Eskin of FOX29, the Eagles are trying to trade inside linebacker Najee Goode.

According to Adam Caplan of ESPN, the Eagles are going to release safety Ed Reynolds.

According to Eliot Shor-Parks of NJ.com, the Eagles are trying to trade Jaylen Watkins.

There have been reports that the Eagles are also releasing Raheem Mostert, who led the entire NFL in yardage gained during the preseason.

Per Adam Schefter, Tim Tebow has been cut.

Praise the Lord, Thank You…

Lol henski u may jump for joy,,,,could this be rg3 coming this way or chip knowing no one will sign tebow so if injuries hit he will be callef up, he probally got tired of tebow questions

I can easily see Chip Kelly with grabbing a QB off the waiver wire who he feels has some upside (Matt Simms of Buffalowho was just released as an example)
Or simply bringing back GJ Kinnie to the Practice Squad to basically run the “Scout Team” which will not require a spot on the 53 Man Roster to do..

Per ESPN & Adam Sheffler, RG3 will be remaining with the Redskins per Team President speaking for Owner Dan Snyder—Let the chaos continue at Redskin Park

This move makes sense. I’m sure Tim Tebow is a great guy, and he did outplay Matt Barkley (which is more a testament to how bad Matt Barkley is than how good Tim Tebow is), but ultimately, the circus that comes along with having Tim Tebow on your roster is not worth it for this guy’s limited passing talent.

I find the Tebow phenomenon weird and creepy. There have been a TON of bible thumping players in the NFL over the years (Kurt Warner for example) that were MUCH better players than Tebow, but none generated the kind of circus that surrounds this guy. His crazy fans hurt him almost as much as his throwing ability.

Report Mahel. cut roster at 52. Reynolds and Watkins both gone

hey only 2 QB’s Deserteagle!!! I felt Chipwas leaning that way the more Games that Barkley & Tebow Played in.. It’s funny in the 2 minute drill whenTebow actually passes the ball, he does better instead of holding, holding, holding the ball.. He just doesn’t trust his receivers and his arm enough to let it rip and waits to see if receiver is open which you cannot do in the NFL and Barkley simply doesn’t have the arm strength ..Kelly can get a dozen QB’s in as #3 wow can be better than both Barkley/Tebow.. When Tebow failed on both those 2 Point Coversions miserably vs the Packers, he was Toast in Kelly’s eyes ..

Bills Cut QB Matt Cassell who would do well in Kelly’s System and knows the Eagles QB Coach well if Chip think she needs to Carry a 3rd QB which I don’t think he does.. Kelly will likely bring GJ Kinnie back to the Practice Squad to run the Scout Teamsduring the Season…

Pman yes you were right…I’d say he is still working the phones ,and. Scanning the wires to add depth to our roster

When asked who is your nickel slot cb ..chip “depends upon who were playing ” with taht type of back pedaling he may be my 1st choice !

One interesting footnote ,amongst the cuts are SPECAIL teamers who were integral in there roles ..it will be interesting to watch that part of the formula play out..

Pman. I didn’t think he’d cut ties with maehl ..an Oregon duck. Who waddles out of here with Matthews at Linebacker ..Its an interesting. Dynamic between coach and GM

Was curious Pman ..were any Oregon Ducks amongst wire casualties?

I think all the Oregon Duck Players are already on the Eagles Roster.. Ha
I have not come up with any just yet..

Checking the Waiver Wire list for any Slot CB’s

CB Tony Carter released from the Broncos who knows Coach Undlin well
& Leon McFadden from the Chargers is a couple of Players To keep an eye on..
TE Maurice Lucas of the Panthers & TE John Phillips of the Chargers could be good fits if Ertz is slow to Recover..

OLB Lyndel Trail from the Texans has some upside

I saw No quality Safety’s or OL so far …

Seahawks Trade a 5th Round Pick to the Chiefs for a back-up Safety Kelcie McCray who may end up Stsrting for the Seahawks due to Kam Chancellor’s Holdout and Earl Thomas slow recovery from off-season surgery
This Deal kinda of tells you that the Seashawks don’t think the Chancellor situation will be resolved anytime soon and that Kam is serious about sitting out the entire Season as he said he would…Issues in Seattle..

Tony Carter would be a real good pickup..he is a good slot corner…wonder why he was released.

Carter is Small but cat quick and physical which most good Slot CB’s are..
You don’t really need length playing the sSlot almost Routes are going to be in that 5-8-12 Yard area, what you need is agility,quickness and real good stop & start skills plus you have to be a Good Tackler

I see Leon McFadden is out there and the Ravens Released a decent looking one whose name escapes me ..I thinks it’s Vaughn..