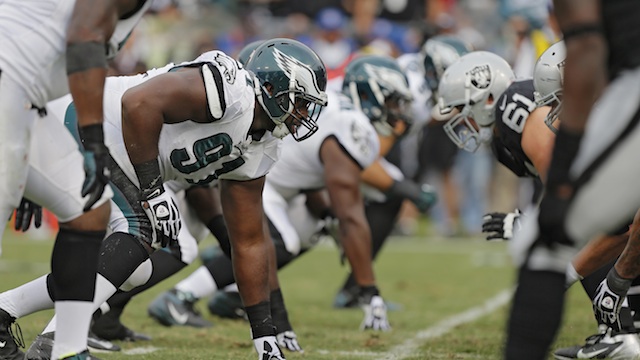 OAKLAND, CA – NOVEMBER 03: Defensive end Fletcher Cox #91 of the Philadelphia Eagles lines up against the Oakland Raiders in the second quarter on November 3, 2013 at O.co Coliseum in Oakland, California. The Eagles won 49-20. (Photo by Brian Bahr/Getty Images)

The Eagles defense will need to take away the Cowboys running game.  The defensive front was unimpressive on Monday night against a rebuilt Falcons offensive line.  They’ve got to play much better against the big physical Dallas offensive line, which is considered the best in the NFL.  If the Cowboys are able to run the ball on Sunday, the Eagles will be in trouble because that will take the pressure off of Tony Romo and his receivers.  They will be able to lean on their running game and throw the football, only when they want to do so.

Fletcher Cox, Bennie Logan and Cedrick Thornton will need to be in complete union with the linebackers, when it comes to run defense.  DeMeco Ryans is the best run defenders of the Eagles inside linebackers, but who knows how much he will play on Sunday as he continues to recover from the Achilles tendon tear.  Ryans is still laboring, so he won’t be effective against the pass. You know the Cowboys would love to get their speedy backs, Joseph Randle, Lance Dunbar and Darren McFadden matched up against Ryans in the open field, so Billy Davis will need to watch how much he uses Ryans.

Mychal Kendricks and Kiko Alonso will need to be on top of their game against the run.  Romo will be looking to tight end Jason Witten when he throws the football, but he will also target his running backs.  Romo has the patience to throw the football underneath to his tight ends and running backs.  The Dallas backup tight end Gavin Escobar is also capable of making plays.

Romo will take his shots downfield to Terrence Williams and on third downs, he’ll try to find Cole Beasley.  I expect him to be patient for the most part, but he’s going to take a few shots and the Birds must be ready for them.

With Dez Bryant out of action, the Eagles defense will be counted on to keep the Cowboys scoring to a minimum.  They can’t let Dallas score over 24 points.  Romo is capable of taking over the game, if the Cowboys are able to run the football.  The Eagles have got to make the Dallas offense one-dimensional.  They can’t let them run the football. It’s as simple as that.

If Dallas is able to run with some success, Romo will be able to peck away underneath and control, and keep the Birds offense off the field.   The Eagles front seven has said that they’re good, on Sunday, they’ll need to prove it.

The Biggest Game of Coach Chip Kelly’s NFL Career and the Eagles 2015 Season…The Eagles have lost 4 of their last 5 Games and Kelly’s Overall Record of 20-15 in his 35 NFL Games as Head Coach is losing its Luster..

The Big Difference we will likely see this year from the Cowboys Offense to last year is the amount of Passes to their RB’s out of the Backfield..
I expect RB’s Randle and Vaughn to get 15 Passes thrown to them out of the Backfield on delay pass-routes due to how many Pass-Rushers the EAgles Send in… The more the Eagles Blitz, the more likely the Cowboy RB’s have to stay in a Pass-Protect…
Losing Dez Bryant hurts the Cowboys but they have other weapons ..
WR Terrance Williams is hot and cold and can be pushed around, he’s one of those WR’s you don’t want to get going early in a game or he can take th top off of a Defense…. WR Cole Beasley is that typical small, but quick Slot WR who is clutch on 3rd Downs to extend Drives and can be a difficult matchup for LB’s & Safeties..
WR Devin Street will come in take Dez Bryants Routes over and is unproven though he had a pretty nice Summer and Pre-Season.. He’s pretty good on the Deep Slant Routes and has some Size and Speed though his hands are still iffy and is nowhere near the Blocker or Physical Presence that Dez Bryant is in the Running Game or Red Zone
A new Target that Tony Romo looks for more and more often is Back-up TE Gavin Escobar who is more of the Receiving TE of the Cowboys as he is not much of a Blocker, but has size, athleticism and very good hands and is a big weapon for Romo on 3rd Down and in the Red-Zone as everyone focuses on Jason Witten, while Escobar flies under the radar… Eagles must prepare for him ..
On the Positive Side, the Cowboys OC Scott Linehan is still a pass-first Coach at heart and with former OL/Running Game Coach Callahan gone now, I could see the Cowboys not sticking with the Run as long as they did last Season when they had Coach Callahan and RB Murray.. The Eagles must take advantage of when the Cowboys put the ball in Romo’s hands more often..

Defensively the Cowboys have a much more active Front 7 and their Safety’s (Barry Church & JJ Wilcox) are about as an aggressive, physical Tandem of Safeties as there is in the NFL but they are susceptible in getting beat Deep if you set them up and take shots at them..

In the End – Cowboys 33 – Eagles 24 in a game that was closer than the final Score indicates.. Eagles will have their chances, but fail to execute in the Red-Zone causing missed point opportunities..

SHUT THE FUCK UP YAIDIOT

Go Bet and lose more $$$ that you don’t have Henski..
The Cowboys are the slightly better Team heading into Week #2 which is why they get the nod over the spiraling Eagles who have lost 4 of their last 5 NFL Games and still have Billy Davis as their Defensive Coordinator and big ? with Kicker Parkey which is not good.. .

90+% of this board CALLS you a flip flopper or fraudman.

Keep Betting and Losing your Ass Henski .. Your the Idiot & Loser on here who has been called out numerous times by G-Man himself..What kind of Adult gets called out by Gary Cobb on Sports Blog…

keep hitting refresh to see if you can post first on the next new article.

Is this the Henski that keeps coming back to the Sports Blog where the Owner (Gary Cobb) has to Personally Call You out for Acting like an Idiot .. and you still continue come back for more … Sounds like your the one who needs a life Henski… Go Call Your Bookie and try to Win back what you said was a Slam Dunk last Week… What a Real Idiot you are..

Takes a special breed of asshole to come on an Eagles site during Cowboys week and predict we lose.

I could give a Rat’s Ass what you think Henski..
I hope the Eagles go ahead and Prove me wrong and play a Great Game and Win.. I just don’t see much from this 2015 Team and will always call it like I see them..

The Eagles defense has to start coming up big in pressure situations! They consistently give momentum to the other team by failing to come up with key stops….Last year against Dallas we take the lead, after coming from behind…the defense coughs the lead up…in the Atlanta game…we got em with a 3rd and 15 pinned to their own 7 yard line…their defense is gassed..all we have to do is get the ball back to a hot Sam Bradford to finish them off…the defense gives up a whopping 20 yards on a draw play!
The Defense needs to step up!~ I’m tired of hearing about how good the front seven is…they need to prove it in tight situations…get off the field on third down!