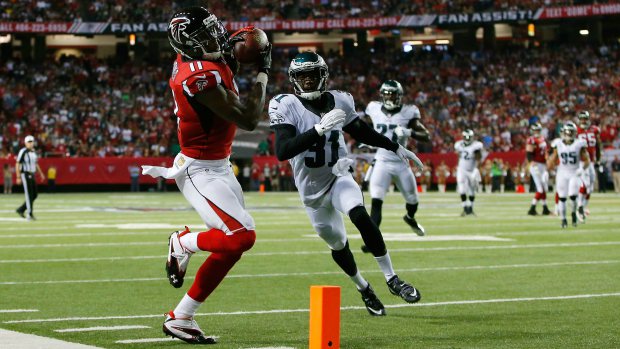 Byron Maxwell was atrocious against the Atlanta Falcons and his nonchalant attitude postgame only made matters worse. Even with the performance, one that has many Eagle fans ready to call him a “bust,” there are bigger concerns moving forward with this the secondary.

For all of the additions that were made in the offseason to improve at cornerback and safety, the roster decisions since that time have weakened the overall depth at the position group.

Unlike Monday night against the Falcons, the Eagles will not be able to rely on two cornerbacks and two safeties to get the job done on a weekly basis. The NFL is a passing league, and there needs to be contribution from players who were given a spot on the final 53 man roster.

What is troubling to understand is why a guy like EJ Biggers who has actually started at safety in the NFL isn’t being used instead of Maragos. Let me make something clear, whether it’s Maragos or Biggers, both are guys I personally don’t care for minus special team contribution. Until Eric Rowe is ready to contribute, options are slim, and Biggers may need to play a bigger role then what fans would like to see.

I like the Eagles starting four with the secondary, but with Eric Row not ready to contribute at the moment, there really isn’t another guy I’m comfortable seeing. When the decision to trade a guy like Boykins and release Watkins is made because there is confidence with other players on your roster.

How does the actions taken on Monday by Chip Kelly and Billy Davis support that theory?

Short answer no, teams that go spread will torture the back ups unless they get to the QB, but let’s stop acting like Boykin would have solved all the depth issues himself.

Did anyone look at the all-22 pics and vids?

Falcons were often in max-protect due to their shitty oline. (perhaps explaining the lack of a pass rush) Keeping backs and TEs in to block and often sending only 2 wrs into the secondary.

I watched one where 4 guys followed Julio deep , and White came running across the free across the middle while the other guys either stood (zone I suppose) or were slow to follow.

2 guys constantly getting open against 4 or 5 or 6.

What happens against a team that can protect with its oline and sends 3, 4 or even 5 wrs/tes out on patterns?

Good Points Vinnie,
I am not sure there is another Team in the NFL that has such a weak and limited TE Corps as the Atlanta Falcons do..
The Cowboys will throw Witten, Escobar & Hannah at them this Week
The Cowboys will utilize RB’s Randle and Vaughn in their Passing Games versus the LB Corp of the Eagles
The Cowboys will not have Dez Bryant but will still have Terrance Williams and Cole Beasley doing their usual Routes and Devin Street will replace most of the Routes that Dez Bryant runs which are the Slants, the Up and Out and Back-Shoulder Fade Routes..

find out when we paly Dallas won’t we.

It’s irrefutable that Chip is putting his chubby fingers in every new hole in the dyke that spews a leak.This is a byproduct of personnel changes and integration into a “new system” for many of these players .Watching the game ,checking off the list of Newbies on the roster ,everyone had there learning curve in the First game under the lights.Kko made an incredible athletic play ,which is a saving grace to what was a touchdown ,and a further embarrassment in the first half.Demeco Ryan’s looked like a guy who pisssed out all his sport drink ,and showed the effects.Maxwell was. Asked for urine samples ,because he resembled Fletcher and was the legion of swoon.Demarco Murray ,ran behind the O line like a pedestrian crossing a busy highway he’d never seen them before .Shady must have spit milk through his nose watching the 12 yard loss.Agholor was a rook on Monday night ..Mathews was asked to shoulder pad the burden in game one of year two ,to be the new number one.Summation ,one kick wide right from taking the lead in a game that was winnable.Lets all understand we are watching a lot of moving pieces ,we can re distribute the deck chairs on the titanic last Monday night and still bear witness to a piss poor game plan by both sides of the ball.Now a familiar divisional foe,comes back to the scene of the last loss they payed on us at home.If everything starts to look more like pre season ,Sam flinging darts ,Demarco running over people ,wide outs working in unison ,and a beat down of the vaunted Dallas O line by our front 7 .The titanic will become the Queen Elizabeth and smooth sailing will lie ahead.Pman will be back on board the playoff train and onward we will chug to 11-5 ..Anyone who thought this would be seamless,is using there hearts more than there football I.Q. ..We are home vs the bad guy ,riding into a town of angry Birds..Lets flip the switch ..to game two..

Marcus Smith II was a full participant in practice.
Vinny Curry replaced Barwin for 7 plays and Graham for 14 plays Monday Night. Will Marcus Smith get OLB snaps and Vinny Curry return to DT in nickel pass rush against Dallas? Game day roster spot opened up because Ajirottu has a concussion which Marcus can fill. ( Riley Cooper replaced Ajirottu’s snaps on special teams during game and will resume them this sunday since Austin cannot play special teams )

I said this yesterday. Smith is back. Awesome.

I suppose its good news if Curry can get back to the DL. I am getting tired of constantly reading how every defensive player seems to be “made” to play a different position.

I still have no idea why Miles Austin and Josh Huff are on this team.

Andy Reid did the same thing he had a defensive tackle play fullback can’t remember what his name was.

I remember that – but was it as expansive as this?

Am I missing any?

Eric Rowe – Drafted and Getting Reps at CB though he played 3 Years as a Safety of University of Utah.. HE will be moved to Safety for 2016

Walter Thurmond Jr – Draft and played CB his entire Career with Slot CB being his Best Position, but this Year with the Eagles gets moved to Safety since Eagles have no one else to play

Matt Tobin – Comes to Camp as the leading Starter at RG, now he is the Back-up Swing OT

I don’t see your list as asinine as you may think for the simple fact OLB in the 3-4 is tecnihically a 4-3 end who now has the responsibilities to cover. DT to DE is not that big of a switch either to me. Now OLB or DE to Mlb is a bigger change I can go with you there.