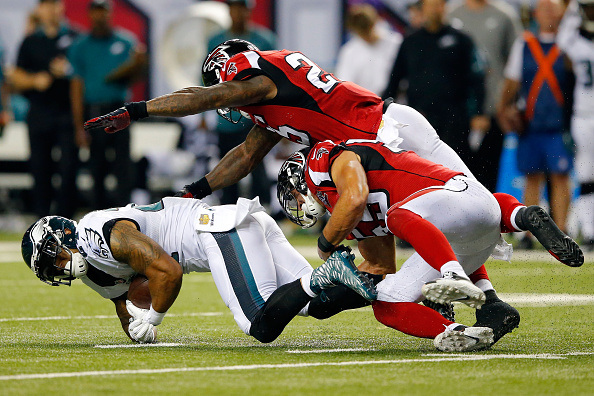 ATLANTA, GA – SEPTEMBER 14: Ryan Mathews #24 of the Philadelphia Eagles is tackled by Paul Worrilow #55 and Tevin Coleman #26 of the Atlanta Falcons during the second half at the Georgia Dome on September 14, 2015 in Atlanta, Georgia. (Photo by Kevin C. Cox/Getty Images)

Chip Kelly and the Eagles came out in the second half and looked like the offense we expected to see this season, but they have a serious problem that needs to be addressed.  Short yardage and goalline remain a problem for Chip and his offense.

The game was on the line in the fourth quarter and the Birds couldn’t gain a yard on a 3rd down run with Ryan Mathews carrying the ball.  That’s been a problem and it remains a problem for Chip Kelly and the Eagles offense.

They ran the same play on the goalline that they ran with the game on the line in the fourth quarter.  Mathews was really stopped on both plays, but on the play by the goalline, left guard Allen Barbre pushed Mathews into the end zone after he was stopped.

In the fourth quarter with the game on the line, Mathews was stopped dead in his tracks and it forced the Birds to try a 44-yard field goal.  Of course the kick was missed and it cost them the game.

I think the Eagles need to put the quarterback under center and go to a three-tight end set and outmuscle the defense.  Chip doesn’t seem to think so.

“There’s no difference”, Kelly said.  “It’s just the path of the back and how we want to get the ball handed off to him.  We don’t think there’s much difference between the two.”

I think there’s a big difference.  The short yardage and goalline plays have already hurt the Birds and they will continue to, if they don’t find an effective short yardage package.

And just wait until the Eagles actually start playing Teams with good Defensive Front 7’s… Eagles are in Trouble and will have to pass. pass pass..
The Eagles OL nor them having TE’s Ertz or Burton in together won’t help much since neither are physical enough or good at run blocking..
They would be better off with a “Jumbo Lineup” of OL Matt Tobin & Another OL to come in and block instead of their TE’s..Kelly talks”Power Football” but the reality is that his run game is based on deception & tempo which doesn’t workinobvious short-Yardage/RedZoneplays where there is no time for deception or misdirection or gadget calls work.. We saw enough of this with In the Andy Reid Era.

I understand Reid would frequently try gadget plays even at the worst times in the game, but I never seen him on a 3rd and 1 hand off to the running back in the shotgun. Kelly did that same ignorant ass shit last year, and cost the Eagles the game against the Cardinals.

Just about all these problems that are constantly being talked about now are damn near the same exact problems the Eagles had when Reid was here.It’s like Reid never left at all I can’t tell the difference between him or Kelly. People were complaining about Bradford’s slow start when I seen the exact same play from McNabb, Vick and Foles. There is a serious problem going on here with the Eagles, and it’s deep rooted, and more complex than even I can understand.

Jason Kelce is a finesse center, they take advantage of teams pulling him but the defense has the advantage in the trenches. If you want the good of Kelce then you have to live with the bad.

Knowing Kelce’s strengths & weaknesses then Chip Kelly should have made sure he had stud, physical Guards on either side…
Barbree looks ok at LG but Gardner appeared overmatched at times..
And what was going on with Jason Peters who probably had one of his worse games as an Eagles and was getting beat consistently by rookie Vic Beasley and OLB O’Brien Schofield , who I wanted the Eagles to pursue in Free-Agency

The tandem of Barbre and Gardner has no business starting on an NFL team. The combination does not yield enough talent to make them effective.

the Chipper gave both Gardner and Barbre extensions on the low end of the pay scale. He must eat what he sows.

Watching KC vs Broncos…Marcus Peters with a pick 6. He had a nice pick last week too.

kid looks good – he made like 4 top notch plays tonight

M. Peters can play. He had some issues in school but the talent is there. This is a kid Chip would not put on his draft board neglecting the opportunity to put a good talented prospect on the team due to some issues while in college..

Pman I am aware of the problems and the results. I am also aware of the contrition Peters showed afterwards and how he made amends to the coaching staff. People make mistakes…should not necessarily x you from being drafted. Andy Reid has a good player on his hands.

EHL as Peters was high stepping into the end zone I was thinking culture be damned give me talent. Hahahahahaha

17 teams didn’t have him on his draft board and Andy Reid is willing to take chances on players….yet still has nothing to show for it.

Did you say he has nothing to show for Peters?

Did you not watch the game?

Kelly picked the personnel so ultimately they better have it. These players are his groceries.

I told everybody marcus peters was the best corner in draft. Dammit chip

Man peytons arm iz done but damn he still smArt…wouldnt want to go against him in clutch time….elite

Man peyton looks so happy for that win…..probally like screw everybody i aint done yet,,,,,happy for him

Man I love dabo sweeny my favorite coach….would love to play football for him

It will get you every d*mn time.

Yet this site loves being nostalgic about Andy Reid. I now love the Chip Kelly tore apart a prolific offense that Reid left in place with irreplaceable weapons lol.

I was a big Andy Reid fan and respect all his accomplishments as the coach but people act like Kelly is this smug all knowing character we have never seen…Reid was the hands down king of that and not even close.

Lol i was thinking the same thing tsj…..reid should have taken it to ot……good ole reid

Well Charles could just as easily ripped off a 50 yard run, but damn take a knee and go to OT.

Timeout on denver’s 3rd down play? (gonna need that is they score Andy)

I am beginning to wonder if Chip also needs a “common sense” coach…
“You need to know before the end of the 3rd down whether to kick or go for it…you cannot wait till half the playclock has run down.

Eagles have the largest coaching staff in the NFL….what harm would one more do?

Common sense coach, isnt that what the asst head coach is

Chip is too involved with the Play by Play Game Calling on the Offensive side of the Ball that he gets lost in the “Fog of War” in my opinion… I do not think that HC that are involved in every Play Called whether its Offense of Defense is a good thing during the Games for far too many things can get missed like the Use of Time-Outs, Game Situations versus Down/Distance and especially the final 2 Minutes of the Half and Game, Challenge Calls, etc,etc and the HC needs someone on the Sidelines/Box Seat on the Headphones to assist them in this..

Its dallas week… move on everyone. they had a horrid week and still scored 24 points.

What I expect this week

1) The eagles come out throwing.
2) The run game gets going late in the 1st,
3) Dallas tries to run first.
4) More witching and moaning from the usual suspects… vinnie, jake.
5) Pman flips around 3rd quarter and supports the birds again,

Suck up this loss and move on ladies. You are all becoming the joke that the rest of NFL laughs about.
Go Birds…. F Dallas!!

paulman is one of the worst flip-floppers on here…the sky is falling on any series the Eagles are struggling and he is perfectly right…and when the Eagles do well…its also just as he predicted…flip-flopping…like a fish out of water!

I keep reading that the Eagles “abandoned the run” because it wasn’t working. It seems to be the common narrative.

How do you “abandon” something that never existed in the first place?? Sure those runs went for nothing….but those passes were going for nothing too!!

Kelly, like all coaches, scripts his first sets of plays…and he scripted 80% pass over the first 10 plays. Add in the next drive and it becomes 14 passes to 4 runs.

Why did he go pass wacky Vinnie?

Birds 24/7- Roddy White Takes Jab At Eagles Cornerbacks
To add insult to injury, Roddy White is talking smack about the Eagles defensive backs, stating that they did want to jam them but preferred to shadow. White basically was saying that the Eagles d backs were not that good and soft (finesse). He also stated that the Giants d backs are better and will put up more of a challenge. How embarrassing!

I think the team is still gelling to be honest. I’m hoping that Kiko can be sharper and we dont see much of Ryans this week. Also we need the pass rush to put pressure on Romo. They really don’t have many play makers past Witten. Beasly is a pest. My biggest fear is the Dallas O-line coming out and eating the clock doing the 4-yard runs all the way down the field. Special Teams we have a good edge on them and our Offense should be able to dictate to that defense. I’m gonna be the optimistic fan that I am and say eagles 37 Cowboys 12. I dont care what the score is really, more important to get the win than for me to be right. Unlike certain people here.

The defense has to step up this week! They are the key to the game…the Eagles offense will scored points…Sam Bradford will be even sharper than he was last week…we will be able to run the ball more efficiently…Dallas will also be effective offense the question is can we get the key stops in critical moments of the game…its time for the Defense to step up!

im heading home for this game and already dressed in my green.Im confident that this game will turn the page on a tale of two halves,last week.The Angry Birds have read and heard th sniping both from the fans ,and the Roddy whites .Now ball your fist ,grow a pair and put Dallas down hard.Im pumped ,for a much different outcome than the Chimp.I think Vegas puts a line at -5 to scare off the Eagle bettors.They understand the importance of this game .This is the “shut your chimp pie hole game” In deference to Henski. All caps GO EAGLES

EHL .Roddy white was schemed to match wits vs Bill Davis ,not the Eagles corners ..lets put the blame ,where it lies .Its the ineptitude of this DC that you guys know ,pisses me off.It exposes guys to mismatches ,they shouldn’t be in.He will be in the cross hairs at the linc..”Yotes get your defense together ” Denzel