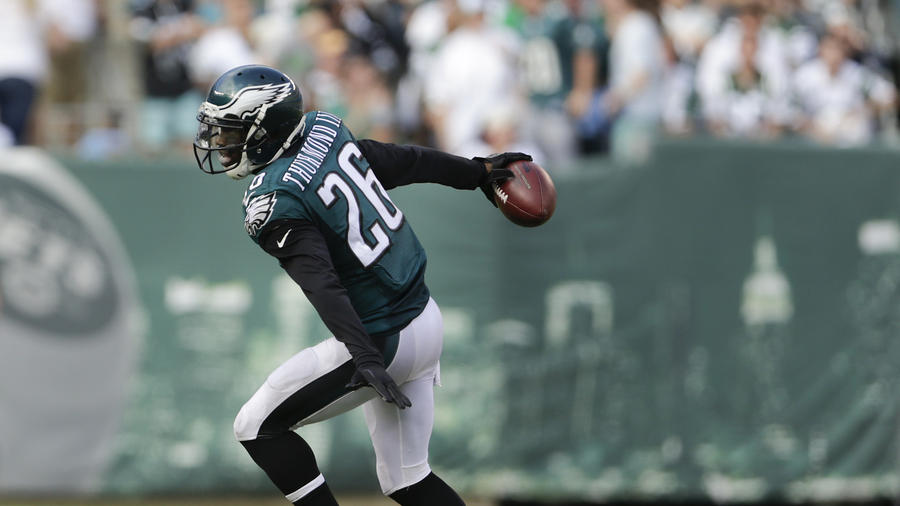 The Eagles have only played three games, but it looks like they’ve solved their safety problems.   I haven’t seen two safeties in the National Football League playing any better than the Eagles Malcolm Jenkins and Walter Thurmond.

They seem to have a clear understanding of what every offense they’ve faced is trying to do and they’ve been making plays.  If the entire team was playing the way they have been, the Eagles would be 3-0 with three lopsided wins.

They’re probably two of the most versatile safeties in the league and right now they’re doing everything well.  I see both of them out there making contributions on Special Teams as well.

Jenkins has been a leader on the football team, since Chip Kelly and crew signed him a few of years ago.   Like Thurmond, Jenkins is a converted cornerback, so he’s been asked to cover wide outs man-to-man when the situation warrants it.  Thurmond is playing safety for the first time in his career, so you know he has no problem walking up on a receiver and covering him.

I don’t know why, but Jenkins has been playing especially focused and aggressive in the first three games, when he walks up on the line of scrimmage.  He was the only defensive back, who was able to match up the strength of Julio Jones in the Atlanta game.   Jenkins successfully attacked the quick screen in the Falcons game and should have had a couple of interceptions.

Yesterday in the Jets game, Jenkins grabbed big wide receiver Brandon Marshall of the Jets and threw him six yards into the backfield.  The Jets lost about five or six yards on the play.  I’ve never seen a defensive back manhandle Marshall like that.  He was also the guy who shot the gap in the Falcons game and made the tackle in the backfield on the 3rd down and short play to give the Eagles offense another chance to win it.

Jenkins leads the team in tackles with 22 total stops with 20 solo tackles and two assists.  He picked up a fumble last week and took it down inside the 30-yard line to give the Eagles offense a great chance to score late in the game.

Thurmond got his second interception of the season yesterday and it sealed the Birds first victory of 2015.  The game was on the line, he got the opportunity to make a play and he did it.  That’s what you call winning football.

The interception was a nice play because he grabbed the football that had been tipped by Marshall and he made sure to get both feet in bounds before leaving the field of play.  Thurmond also had a nice play defending a deep pass to Devin Smith along with teammate Nolan Carroll.  They could have picked the pass off, if they hadn’t gotten in each others way in pursuit of the football.  Their coverage was very good.

The former Seahawks cornerback, took hold of the open safety position during the offseason and he hasn’t looked back. His quickness shows up when the ball is in the air or when he shoots up from secondary at the last split second to make a tackle on a ball carrier.

Thurmond is fifth on the team in tackles with 15 total with nine of them being solo tackles and six are assists.

Chip Kelly Sings The Praises of Darren Sproles On Day After

Strong safety play, no doubt…Carroll has also been very solid! Davis seemed to have Maxwell in more press coverage, yesterday…if that continues, Maxwell will be fine!

Eagles D is playing great. Nothing to complain about there really. Best they’ve played in years.

Too bad we don’t have a qb.

We complain about Maxwell but think about it, Jenkins and Thurmond are playing well because the corners are better, even on Rowe’s int he ran with the wideout without much safety help. The Eagles D could actually be special if they had that killer who could get to the QB whenever. Oh yea and they fired Billy Davis lol.

According to BGN…Eagles sign FA veteran kicker Caleb Sturgis, place Cody Parkey on IR…out for the remainder of the season.

Sturgis kicked for the Dolphins for 5 Seasons and has a strong leg (75% Touchback %) but is erratic with his FG’s and has a 77% Careeg FG Made % which is not that good
But maybe a fresh Stsrt for him..
He went to College at U of Florida and lives in Florida..
How he adjusts to colder temps we will have to see..

Shame about Parkey who never looked right all Summer long..

Man Sturgis? Okay we struck gold with Parkey last year maybe we go 2 for 2 on kickers.

Big, Florida State has a good kicker, his name escapes me at the moment. He maybe worth investing a late round draft choice on.

Roberto Aguayo dude missed a kick 2 weeks ago first one he missed in 2 years, a great leg for sure.

Yes that is him. I saw that miss. He was bound to miss one sooner or later. I would draft him in the later rounds, not only to give Parkey competition, but to ultimately replace him.

Andrew gardner out for year…..shit matt fucking tobin……..we gotta get moffit back

I see Dennis Kelly getting Reps at RG while Matt Tobin becomes the Top Backup at OT.. They may being one of the OL up from Practice Squad
That’s a shame about Gardner who appeared to be improving but I am not sure he’s the long term answer and basically will have to start over again next Summer..

Panthers Acquire DE/OLB Jared Allen from the Chicago Bears for a Conditional 6th Round Pick to improve their Pass-Rush due it injuries to DE Charles Johnson.. It’s a shame the Eagles couldn’t get Jared Allen who can still get after the QB on a Rotational Basis…

Bears already paid Jared Allen’s $11.5 Million. roster Bonus in March & July so the Panthers are only paying him $832,000 in Salary for the remaining 13 Games of the Season .. Watch Jared Allen get 8-10 Sacks playing for the Panthers in a winning environment .. What a steal the Panthers made out with
For a Conditional 6th Round Pick..

Patriots Acquire 3rd Year ILB Jon Bostic from the Chicago Bears for a 6th Round Pick in 2015 Draft as HC John Fox continues to purge their Roster
And stockpile picks as the rebuild job continues.. Bostic was the leading Tackler on a bad Bears Defense last Season and this is another one of those steals that the Patriots seem to do every early Season..

1) Packers (3-0) – QB Rodgers playing at unbelievable level right now..
No Jordy Nelson, No Problem…He has Receivers Cobb, James Jones, Ty Montgomery to throw the Ball to or TE Richard Rogers or Quarless or Backs Lacy or Starks.. He is hard to Defend

3) Falcons (3-0) How many Teams can open up with 3 Wins over the NFC East Division all as underdogs and 2 of them on the road… HC Dan Quinn the early Candidate for Coach of the Year by adding a physicality and mental toughness to an organization that’s been missing for a long time…they still have 6 Games with the so-so NFC South Opponents & 4 Games vs the AFC South (Colts,Texans,Titans & Jags) so making the Playoffs in 2015 are very much in their future..

4) Carolina Panthers (3-0) Best Start in many Years for the Panthers who are a little banged up at WR,OL,DL & LB but keep winning.. QB Cam Newton has elevated his game and is in the best shape of his Career and has taken games over in his own hands and legs at crunch time.. It’s the best start to a Season ever in his 5 Year NFL Career, TE Greg Olsen is having a Pro-Bowl Season as is CB Josh Norman.. CB Charles Tillman and Safety Kurt Coleman have brought Veteran Leadership to their Secondary which used to be a weakness and is much more Physical and well-coached by DC Sean McDermott

5) Vikings (2-1) Winners of 2 in a Row in convincing fashion over the Lions & Chargers after a poor opener out in San Francisco.. RB Adrian Petersen had his biggest Game in over a year and QB Bridgewater is getting better and better under the watchful eye of OC Norv Turner.. HC Mike Zimmer works magic with LB’s and DB’s and has the Vikings Defense really playing good Team Defense

Shoot..the bears seem to be trading everybody. Chip..make a call for Kyle Fuller..they seem to be a little down on him. Pipe Dream!