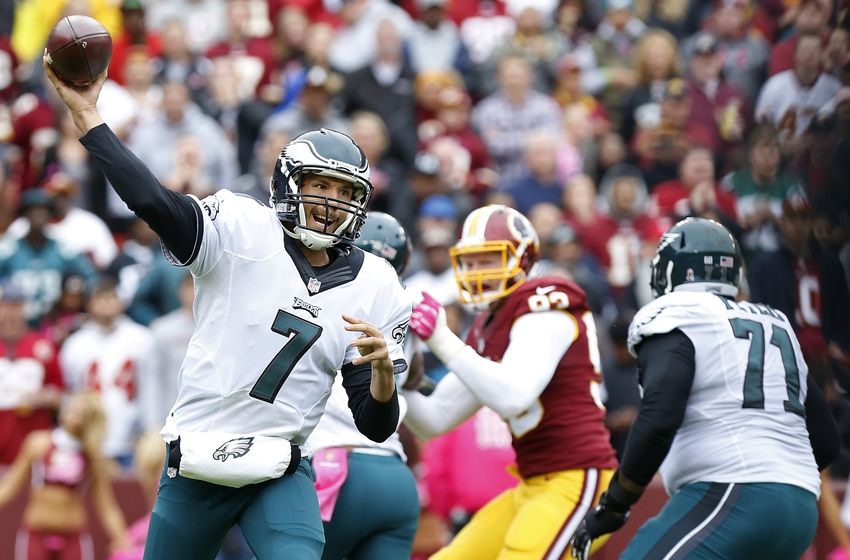 Are you noticing a pattern yet?

Once again, the Philadelphia Eagles came out completely flat and unprepared. They were dreadful in the first half, and it cost them in a critical division loss to the Washington Redskins.

The Birds offense didn’t show up in the first half, and they fell behind 13-0. Despite a decent second-half showing that resulted in three touchdowns, the Eagles for the second straight week couldn’t figure out how to close out an opponent, and allowed the Redskins to hang around.

Unlike the New York Jets, the Redskins took advantage of the Eagles’ inadequacies, and Kirk Cousins engineered a 15-play, 90-yard drive that bled the clock down to about 25 seconds and finished with a touchdown to give Washington a late lead.

Far and away, the Eagles’ defense has not been their biggest issue this year.

They’ve played pretty admirably through the first part of the season, and Chip Kelly’s failures and shortsightedness on the offensive side of the ball are the primary reason that this team is 1-3.

But Billy Davis didn’t help at all today, when his defense couldn’t find a way to stop Kirk Cousins and the Redskins’ offense on a 90-yard drive to close out the game.

The problem with Billy Davis is that he’s an extremely vanilla defensive coordinator who doesn’t bring any kind of innovative schemes or creativity to the table. And when it gets down to crunch-time situations like the one the Eagles faced today, he doesn’t have any tricks up his sleeve that he can turn to.

There very few blitzes, let alone anything elaborate. Cornerbacks rarely receive safety help or double teams. To me, its as if the Eagles’ defensive scheme relies very heavily on the individual talent of each player, and their ability to hold their own against their basic matchup.

The Offensive Line Is An Abysmal Disaster

Jason Peters was already showing signs of age, and now he’s having trouble simply staying on the field every week. Peters left in the first half with an injury, forcing the Eagles to slide Matt Tobin out to left tackle and Dennis Kelly into the right guard slot.

The result was a line that was under siege for the entire game, and allowed struggling quarterback Sam Bradford to take a pounding.

Again, I keep coming back to how inexcusable it was for Kelly to fail to address the offensive line. I understand and agree with the decision to move on from Todd Herremans, but releasing Evan Mathis was the ultimate in arrogance, and now His Majesty is paying for it.

Kelly has stated that some of the lineman available in free agency had “too high a price tag”, but he didn’t have any problem dumping a good portion of that cap space into expensive running backs DeMarco Murray and Ryan Mathews.

It doesn’t matter who the running backs are, if the offensive line is a pathetic joke, you’re going to get results like the Eagles have been getting early in the season. Today’s miserable output? Murray ran just eight times for 36 yards. Mathews took five carries for 20.

If there was a positive to be found in today’s disaster, it was that we finally saw some signs of life from quarterback Sam Bradford.

Bradford came to life in the second half, igniting the Eagles’ comeback with a 62-yard to bomb to Riley Cooper to put the Eagles on the board.

On the Eagles’ next drive, Bradford hit Jordan Matthews for a 30-yard strike to put them deep in Redskins territory. Several plays later, the former Ram did a good job avoiding the rush, and found veteran tight end Brent Celek for a score.

Two drives later, Bradford hit Miles Austin for a 39-yard touchdown to give the Eagles their first lead of the day.

This Week In Sports Science!

Renowned for being the healthiest team in the league, here’s what Chip Kelly’s sports science did to keep the Eagles’ top players on the field this week.

Jason Peters left the game with a quad injury that he had been battling in practice throughout the week.

Mychal Kendricks, who had missed the previous week with a hamstring injury, left the game early in the first quarter after reinjuring it.

Chip Kelly, welcome to the basement of the NFC East.

The head coach is revolutionizing the game with his 0-3 conference record, and his 0-2 record within the division against the dumpster fire that is the Washington Redskins, and a Dallas Cowboy team that was without their star receiver and starting quarterback.

Its flat out inexcusable for this team to not come out with a better effort against a division opponent, and frankly an opponent that they should have no business losing to.

Kirk Cousins and the Washington Redskins, without DeSean Jackson, managed a 90-yard drive that bled out the clock to beat the Eagles? Its absolutely disgraceful.

The Eagles are still struggling with recurring issues that they’ve had all season, and their inability to put a team away and finish a game came back to bite them today. They got away with it against the Jets, but this week their failures killed them.

The good news is that all is not lost, and there were some positives that came out of this game with Sam Bradford and the passing game.

But at 1-3, Chip is running out of time and excuses to clean things up and get this team performing at a consistent level.

Eagles Should Have Success Throwing Against The Redskins