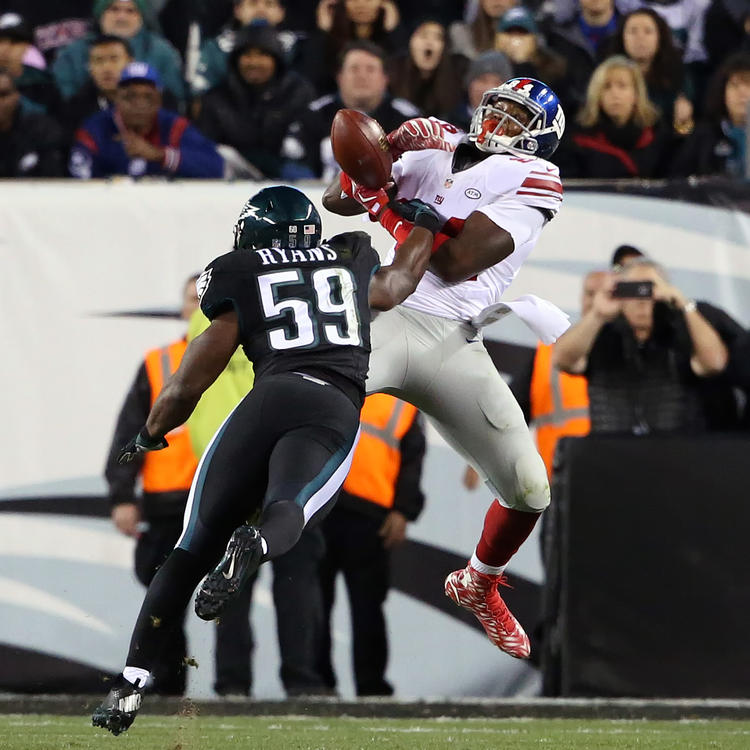 I think turnovers are going to play a key role in the Eagles-Panthers Sunday night game and it’s one reason why I give the Birds a great chance to win.  Neither team is going to be up and down the field against the two outstanding defenses, so it will likely come down to which defense can put its offense in good scoring position.  The Eagles 2015 defense is one of the best groups in the NFL at forcing turnovers and I think they will force a few against Carolina.

Throughout the OTA’s and Training Camp, the Eagles defense has emphasized going after the football at all times.  It didn’t matter whether they were doing it when a receiver catches the football, or when they were approaching the ball carrier to make a tackle.  The mentality is starting to stick and it’s made a huge difference.

Think about all the times in the first six games, you’ve seen an Eagles defensive player going after the football. Do you remember Byron Maxwell punching the football out of a receivers hands in the Dallas game and one of the Eagles defenders picked it up and ran it down to the Cowboys 30 yard line?  Unfortunately, Jason Kelce snapped the ball early on the next play and Dallas got the ball back, but I’m focusing on the Eagles forcing fumbles.

How about DeMeco Ryans taking the ball away from tight end Larry Donnell in the Giants game?   It may have been the biggest play in the game because the Giants were in the red zone and on the verge of going ahead by two touchdowns.

On another play Ryans is beaten by Donnell on a route down the right sideline near the end zone, but Ryans chases Donnell who is open and goes after the ball, when the pass gets there and breaks up the pass play.  A catch by Donnell at that point would have put the Giants in the red zone and in great scoring position.

Also in the Giants game, Malcolm Jenkins punched the ball out of running back Rashad Jennings hands after a good gain against the Birds on a screen play.  What would have been a good play of the Giants ended up being a great play for the Eagles.  The Birds recovered the fumble.

The Eagles are fourth in the league by recovering eight forced fumbles in six games.  During the OTA’s and Training Camp the Birds stressed going after the football in pass coverage and when making tackles. The team even has dummies around the Nova Care Complex, where they have the defensive players knocking the football out of the dummies’ hands when they walk by it.  It sounds silly but it has made them aware of going after the football.

They are tied for third in the league in getting interceptions with eight in six games.   If you were to take away those 16 turnovers by the Birds in the first six games, they would probably be 1-5 or 2-4 at best.

They are one of the best defensive teams in the league right now, because they take the field thinking about forcing turnovers.  Turnovers are one of the most important statistics in a football game and its the reason I think they’re going to win on Sunday.