Temple Owls Come Close To Pulling The Upset, But Lose 24-20 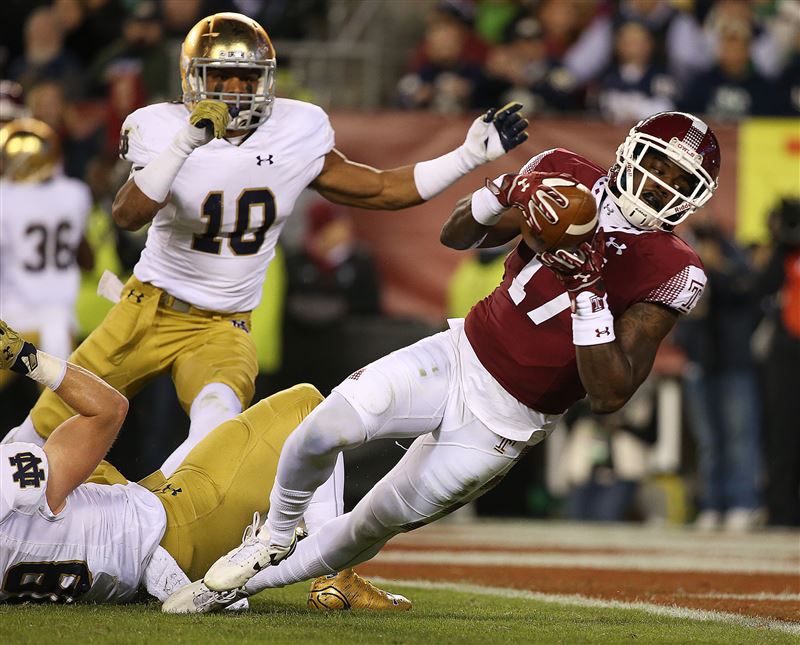 Last night’s contest between the Temple Owls and the Notre Dame Fighting Irish was the biggest game in the history of Temple Owls football.  In the end the Owls came up a bit short, but there’s no question that they are one of the better teams in the nation.  The football squad wearing the Cherry Red colored uniforms gave it all they had last night and came up a little short against the Fighting Irish.

It was their first loss of the season and they had a chance to pull it out up until the last couple of minutes, when Notre Dame took the lead on a pass from their young talented quarterback, DeShone Kizer to local product wide receiver Will Fuller.

The fate of the Owls was sealed when Notre Dame’s KeiVarae Russell made a acrobatic interception of a P.J. Walker throw with the Owls trying to drive with a little over a minute left on the clock.  Walker didn’t have his best game, but he might quite a few outstanding throws.  He finished going 13 of 30 for 188 yards and a touchdown.

The Owls defense made some big plays in the red zone in the first half to keep the game close.    It’s a game that will be remembered for a while because the Owls were at the doorstep of a huge upset.  You got to give the Owls defense credit not the first pick by the goalline.  They crossed up the young Notre Dame quarterback Kizer by having defensive lineman Praise Martin-Oguike drop into coverage.  The young QB threw the right to him and it killed what looked like a sure Fighting Irish scoring drive.

On the other red zone interception, Temple cornerback Tavon Young got one hand on a pass and tipped in the air and Temple middle linebacker Tyler Matakevich grabbed it in stride and took it back 21 yards to stop a Notre Dame scoring drive.

entertaining game. I think I watched more of the Temple/ ND game than the KC/Met world series contest.
Brian Kelly was nervous … Temple earned his respect.

It was a great game and ice to see the Linc that excited and loud, not sure how long it’s been since I’ve seen the Linc that loud & rockin’…
The key now is how Temple responds and plays out their remaining schedule as they have good Teams like Memphis & Houston top
Ayandbeat toWintheir Conference… If they canWin out, they will still get a very nice Bowl Game and National Recognition, if they stumble with a post Notre Dame hangover and lose a couple of games the it’s only a minor Bowl and a forgotten time for Temple Football for most… They need to build on their Success and keep working and playing hard… Memphis and Houston are very Good Teams with Good Coaching & Players and are very explosive Offensively