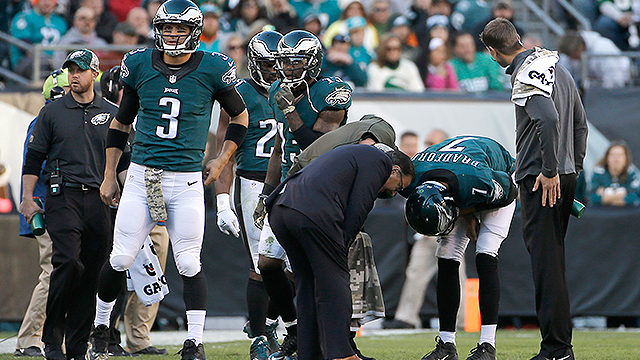 As the first quarter came to a close, it seemed as though the Eagles were well on their way to routing the lowly Miami Dolphins.

The Eagles finally managed to start a game strong, driving for two first quarter touchdowns and even picking up a safety to take a 16-3 lead.

But it was all downhill from there.

After the fast start, Chip Kelly’s offense went in the tank for the remainder of the afternoon, plagued by mistakes, penalties, turnovers, and struggles on third down.

The Dolphins would go on to score 17 unanswered points over the final three quarters, and Chip Kelly only managed to generate another field goal the rest of the afternoon.

We’ve been so focused on Sam Bradford’s erratic and maddening play throughout the regular season, that the questions of his durability had become a bit of a forgotten concern.

However, Bradford’s fragility finally came back in to play today, as he was knocked out of the game in the third quarter with a concussion and a shoulder injury. There’s no word yet on how long Bradford will be out, but his replacement Mark Sanchez also cost the team.

Sanchez moved the ball well on a couple of drives, but also killed the team with a brutal interception in the endzone. Sanchez is, and always will be, a heartbreaker. That’s his call-in card, and that’s what the Eagles can expect if he’s to see any extended action.

Chip Kelly has made some brutal in-game decisions throughout the year, and his calls cost the Eagles again on Sunday.

Late in the game, with the Eagles threatening with a red-zone possession, Kelly channeled his inner Andy Reid, and decided not to the run the ball on one of the league’s worst rushing defenses, and put the ball in the hands of turnover-prone Mark Sanchez who hadn’t seen any action since August.

Sure enough, the Sanchez found an open Miami Dolphin in the endzone, killing another scoring opportunity.

Kelly’s team also struggled on third downs throughout the day, going just 3-for-14 after the first quarter.

Why can’t this coach figure out how to get Darren Sproles involved in the passing game? Sproles has been MIA in the offense since the New York game.

And seriously, how many times is this team going to have touchdowns wiped out by illegal formations or illegal shifts? These are issues that the coach needs to be held accountable for not ironing out during the week in practice.

The Miami pass rush came to life on Sunday, and much of that had to do with their gameplan to attack right tackle Dennis Kelly.

Kelly struggled throughout the day, and his inability to hold up in protection contributed to Sam Bradford taking a pounding and getting knocked out of the game.

It goes back to Chip Kelly’s lack of depth on the offensive line. Kelly did a good job last week against Dallas, but the Dolphins had a chance to study him on film, and exploited him.

A lot of disturbing things came out of the game today.

But most of all may be the team’s lack of urgency.

Once again, the Eagles came out and played a sloppy, mistake-prone game, the typical marks of a poorly coached, bad football team.

And once again, you see very little fire or desperation among the players and coaching staff.

After the game, Chip Kelly was pounding his chest about the 88 plays his offense got in today (to which Ray Didinger of Comcast Sportsnet points out, generated only 17 points of offense for the day). Players were echoing the message of “we’re still in it.”

No one in this organization seems at all bothered by the fact that they came out and choked away a critical game to mediocre football team in front of the home crowd.

While the Eagles are busy playing down to their opponents, the worst division in football continues to slip farther from their grasp.

The Eagles now find themselves in third place, with the Washington Redskins stepping up and overcoming the New Orleans Saints.

We’re halfway through November, and this team still has a sub-.500 record.

It’s time to accept that this is not a good football team, and the head coach has his fingerprints all over this disaster.