The Pressure Is On Villanova As Philly Teams Begin 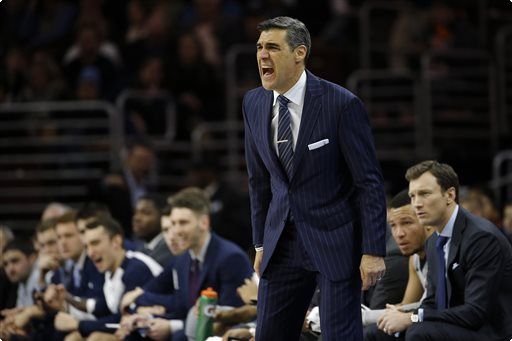 The NCAA College Basketball Tournament runs start today for Villanova, St. Joes and Temple.   I see Villanova and St. Joseph’s making it to the Sweet 16 and Nova going all the way to the Elite 8 before losing to Kansas.   Despite my Bracket picks, I would not be surprised at all if St. Joe’s winds up going deeper in the tournament than Villanova.

The pressure is on Villanova.  There’s not a team in the land that has a better winning percentage than the Wildcats in the regular season for the last three seasons.   There record is outstanding at 91-13.  Unfortunately, Nova has not lived up to their billing in the tournament in the last three years.

In those post-seasons, they have come into the tournament as number two-seeds and a number one seed.  The last two years they have let teams bounce them out in the Round of 32.  In 2014, it was seventh-seeded UConn, which went on to win it all and last year it was the eighth-seeded North Carolina.

Jay Wright has talked to his crew about the importance of them erasing the reputation of being an outstanding regular season program that can’t get it done in the tournament, therefore they can’t make it out of the first round, much-less the Sweet 16.

This is all about what you do in one game.  You never know what is going to happen.  If you’re not shooting well or you’re turning the ball over, you can quickly look up at the scoreboard and realize that it’s over.  Big upsets are always a big part of the Tournament and we saw it in full force yesterday.

Yale, which had never won a NCAA Tournament game was outstanding yesterday in their upset of Baylor.  They led just about the entire game and held on down the stretch with some great free throw shooting.

Villanova has to use its size to take down tiny UNC-Asheville, which has an undersized squad which plays outstanding defense.

Don’t count out my UNC-Asheville Bulldogs vs Villanova.. A Scrappy Team
who will make a game of it for the 1st Half… My Son will be attending
UNC-Asheville Next Fall in their “Mechatronics Engineering Program”.. UNC-Asheville is the smallest University in the NC Higher Education System with about 4,500 Students ..Its all Under-Grad Programs so the Students really get a Hands-On Approach to their Studies,Labs,etc,etc
Asheville,NC is one of Coolest,Hippest Mountain Towns in the Country which is a real haven for Musicians,Artists,Outdoor Enthusiasts who Enjoy Hiking,Canoeing,Kayaking,Biking,Horseback Riding,Golf,Tennis, etc and boasts a growing Retirement Community and also has the Most “Micro-Breweries” per Population Capitol..Asheville gets Rated every Year as one of America’s Best Small Cities to Live in (100,000 Population) and has the Blue Ride Parkway, Grove Park Inn, Cherokee Casinos, Biltmore House,Lake Lure, Chimney Rock & the Great Smoky Mtn National Park all within 1 Hour’s Drive of Asheville give or take… My Son is looking forward to his next challenge’s and growth as a Young adult.. Asheville is 2 Hours from Us here in Boone and the largest City in Western NC by far… A great Town to Visit, especially in the Summer and Fall …

It was a pretty good game until the last 90 Seconds of the First Half where Villanova Finished with 3 3-Pt Shots to make it 40-26 at Half, which was pretty much Game Over…