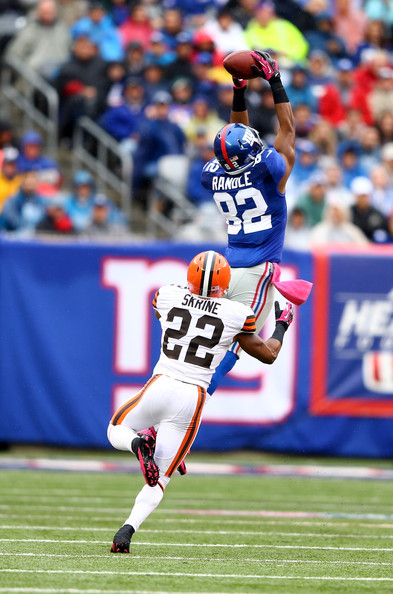 I think the Eagles made a good move yesterday by signing former Giants wide receiver Rueben Randle.  With the move they acquired an experienced receiver, who has good size, 6’2″ 208, good speed and consistent production in his four-year NFL career.

His best season, statistically, came in 2014 when he caught 71 passes for 938 yards and three touchdowns.  Last year he caught 57 passes for 797 yards with eight of those catches going for touchdowns.

I think he will be an asset in the red zone.   He’s shown the ability to catch the ball in crowds as well as going up and coming down with the jump ball.

Not only does Randle have experience, he also has versatility in that he has played both at the outside wide receiver spots and inside in the slot.

Eagles head coach Doug Pederson said yesterday that he’s going to move Jordan Matthews to an outside wide receiver position.  Randle’s presence on the roster allows the Birds to move guys around because the former Giants wideout has already shown that he can play outside or inside.

I was surprised that a veteran wide receiver like Randle was only able to get a contract that is worth about $1 million dollars a year and he’ll be able to make $3 million if he reaches certain incentives.

Chip Kelly Gives Us His Side Of The Story

A Low-Risk, High-Reward Signing…
Hopefully he’ll come to Camp/OTA’s Healthy and Committed and Tip-Top Shape which were some of his biggest issues while with the Giants.
He also seemed to have those minor, nagging injuries, Calf Strain, Turf Toe, Sore Ankles, Hamstring Pulls, etc,etc that made him miss lots of Practices and also made the Giants and other Players questioned his “heart and commitment”..

There is no denying his Talent, just his Work Ethic and Preparation…

Watching Carson Wentz’s pro day The kid can flat out fling it. Give him a year to sit and learn. He can be something special.

If true there is no price from this year or next to high to prevent a move to 1. A Franchise QB for 10+ years is irreplaceable.

Lurie said 2 Years ago that finding a franchise QB is top priority. I believe it is the reason that Doug Pederson is here and Chip is not. Chip did not see the QB position the way the owner does.

I like what the Eagles have done with bringing in talent at the WR position. Much improved from last year. Matthews doesn’t have blazing speed, but I think he will be fine being moved to the outside with Huff, and Randle working the middle of the field. With Matthews, Ertz, Givens, Randle, Huff, Agohlor and Celek, I’m much more confident that Bradford will succeed with tbis type of talent around him. Now let’s get another starting G, and a stud RB in the draft, and let’s see what kind of noise the Eagles can make..