Could Oklahoma’s Buddy Hield Be The Answer For The Sixers? 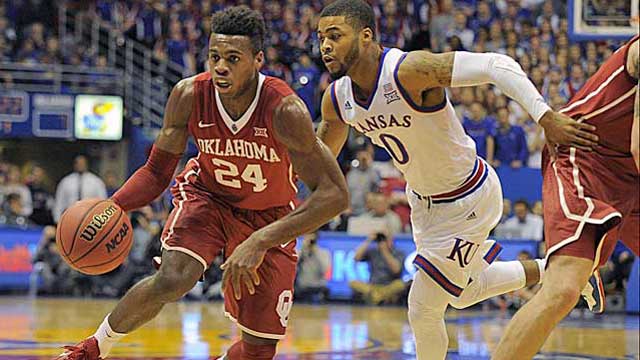 It’s all on the line tomorrow for Villanova as they take on sharpshooter Buddy Hield and the Oklahoma Sooners.   Nova will need to depend on their defense to help them win the battle tomorrow and get to the Championship game on Monday night.

On another note: Could Hield be the shooter that the Sixers need to turn the corner?   His shooting could open the floor for the Sixers big man.  So as you’re checking out the battle tomorrow between Villanova and the Sooners,  think about Hield in a Sixers uniform.

“I don’t know what else they want this young man to do,” said Thompson, “He can do everything you ask of an NBA guard.  “He moves without the ball like J.J. Reddick. He shoots like he’s a member of the Golden State Warriors. He can create his own shot. He’s got a high basketball I.Q. He can move his feet defensively.”

“It’s the Stephen theory,” Thompson told USA TODAY Sports of Hield’s NBA draft stock. “The scouts don’t believe what their lying eyes are telling them. Just like they didn’t believe in Steph, for some reason they don’t see what Buddy’s doing as translating to the NBA at the highest level.”

Dick Vitale just said on ESPN that Jay Wright told him they were going to put bigger players on Hield and wear him out physically.  Hield is one of those types of players, who runs all day long and will pull up from anywhere and shoot.

He’s got tremendous range, so we’ll see if they’re able to wear him out.  I think the Wildcats need to shoot well and their key players can’t get into foul trouble.  I expect a close game.

Yes! But of course the Sixers will only take him if he tears his ACL this weekend.

You should stick to baseball. You’re 10 times worst than what you accuse Dcar of. At least his outrage is consistent across the board with the local teams. You only like looking like a republican politician when it comes to the sixers…smdh

I guess my analysis of the record setting sixers is off base? They don’t draft hurt or non-contributing players? They don’t get rid of contributing players? Not sure it’s republican or democrat.., the sixers tank has been an epic fail. That really isn’t up for debate nor is it along political lines. The sixers are a joke…
Is Heild a top pick? I can say he will contribute to positive outcomes more than any of their 100 previous tank picks…. But again, somehow positive outcomes isn’t what some people want..wierd

Your ignorance is staggering. Remember your disingenuous questions the next time Paulman or Dcar points out how inept the Phillies front office was the last 5-6 years.

Guess your answer to those questions is a resounding YES.

nets dont have a 1st round pick

As for this kid G he is an amazing scorer, but still a bit of a tweener. He seems to do everything well offensively, but I’m worried about his ability to guard the 2s in the pros. If he can consistently show he can create his own shot at the next level and spot play at the 1, it’s a wrap.

when it comes to guards ive stopped worrying about defense. the best guards in the game curry, harden and westbrook play no d. matter of fact the nba and their officials dont let guards play D…

the only D we you need to win titles is a rim and lane protector. oakafor obviously isnt that and noel might become one but isnt yet. so that leaves embiid there.

my plan is this

sign noah and barnes this offseason and draft heild. hopefully we get 1 or 2 pick and lakers get 4. but if not im taking heild no matter what

The scouting reports on Stephen Curry were similar to those on Heild…. Take him…obviously I’m not saying he will be Curry but he will make positive contributions he’s 21,22 which already makes him a grand pa on this team….

This just in!!! High School phenom Thon Maker is attempting to declare for the NBA DRAFT!!!

This kid is 7’0 and can run the point guard position, can shoot and score the ball with ease

If he’s draft eligible, the Sixers will take a look at drafting him. This kid has talent thru the roof

If you have no clue who I’m talking about then go YouTube him!!!

I read about this Kid over the Weekend as he goes to a Prep School in
Canada and is from the Sudan and originally committed going to Indiana University but now is going to Declare for the NBA Draft..
He has only 5 Years of Basketball Playing and is Raw, but has Size, Athleticism and is very Coordinated for a big guy who is listed at 7′-1″ but only 220lbs and reminds some Scouts of a Manute Bol type..

Bruh.. just because they look alike a little doesn’t mean they play the same

You’re not making any sense Paul

This kid has deep range, has handles and can take you off the dribble, can pass the ball like a pg and actually has the ability to bring the ball up the floor and set guys up. He also has freakish athleticism

No kind of comparison to Manute Bol Paul.. All due respect to the late Manute Bol but he never ever had this kind of potential and ability ever, only in his dreams..

I know you said “some scouts” but I’ve yet to hear a scout say that ever. He has too much talent..

I suggest you do more research JH,
Many Scouts are not sold on any of his Skill Level or Basketball IQ at a Power Conference College Level let alone at the NBA Level…. 7-0′ and 212 Lbs he would be stopped in his Tracks versus NBA Players..
Way more Questions about Thon Maker for Teams than Answers at his Current State of Development

Under the right coaching that kid can be a player, he’s a 7 footer with crazy ability

The hell with Simmons give me maker. I’ve only seen highlight film but dam that kids a beast.

Yes MH,
JH doesn’t know who the Talking Heads are…

Of course but that kid is intriguing

I’ve seen Thon Maker play in person 4-5 times and he absolutely blows…. Real talk. I saw him get abused by not only that bum Skal Labissiere from Kentucky but by 15-16 year olds as well. This guy is famous because of the BS crossover/dribbling highlights but he has no real game. No post moves, no jumpshot no basketball IQ. Actually the kid that he crossed over in that highlight (Billy Preston) is a much better prospect at 6’10 240 and only 16 years old. If they draft him I’m out because then it’s obvious that they have no clue wtf they’re doing!

like the first hand account marley. thats why they saying he is projected to get picked in the 20s this year and maybe later…

funny when the kid was 16-17, the hoops world was all hyped on him saying greatness but now the interest is virtually nonexistent.

paulman have you ever taken even a brief look at the kid play?

This guy can take people off the dribble, can pass, if he can some how get in the draft I’m taking him immediately…

Kool I wouldn’t take him with the first pick, but I feel you tho

My Reference to Manute Bol is how thin he is — Thon Maker goes 7-1″ and 212lbs and would get pushed around and broken in half like Manute Bol did when he came into the NBA… This Kid has Skills but so does every other Prep School Basketball Player, lets see him versus other College Guys in the Power Conference’s first and see how his game is instead of going ga-ga with Dunk Highlights on a You-Tube.. Whats happened to all the chatter that Ben Simmons this, Ben Simmons that … Opponents starting pushing him around and his Game went South the 2nd Half of LSU’s Conference Schedule

You said , “many scouts say he is Bol”…. Produce those reports

I’m telling you bro, he stinks! Only reason he got any light was because he played with Jamal Murray, who I think will eventually be the best player in this year’s draft. When I saw him at the Nike Hoop summit last year he was a man amongst boys. Thon Maker comletely stunk against that level of competion. And trust me, Ive not only seen the games, I’ve watched the practices for almost every major HS all star game for the past two years and never once di he stand out. Not Once! GM Cliff’s fantasy “son” is a much better prospect. I’m telling you the philly fans would run Thon Maker out of town by the all star break, he’s simply not an NBA level talent. Just another tall dude who dominates the 6’5 inch centers he plays against. Against a player like demarcus cousins he would get utterly destroyed. I’m talking Apollo versus Drago levels….

Also on another note…just like I predicted Lesean McCoy is not even going to be charged…NO CHARGES FILED…The District Attorney Seth Williams said:

“For the past several weeks my office has worked diligently with Philadelphia Police Department’s Central Detectives to investigate this matter and, in the end, there is insufficient evidence to prove that any individual committed a criminal offense,” Williams said. “My job is not to decide if anyone acted appropriately or not. My job is to determine if evidence exists to charge any individual with a crime. I do that by looking at all the facts. That is what we did here. My decision today is consistent with my commitment to the citizens of Philadelphia to charge, and only charge, those people who, based on evidence, are guilty of crimes.”

Once again, Vinniedafoolass it has been proven that you dont know how to process information and come to clear conclusions…while you ignorantly concluded that McCoy and his friends were wrong and the cops were right…the District Attorney decides that the guys who stomped the drunk Cop cant even be charged!

Duke Forward Brandon Ingram Declares for the 2016 NBA Draft and could very well end up as the Top Pick in the Draft..