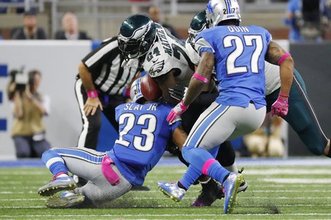 There were quite a few factors which caused the Eagles to lose on Sunday 24-23 to the Detroit Lions.

The number one factor in the loss was the fumble by Ryan Mathews because the Eagles had the lead 23-21 with under 3 minutes to go in the game.  If he had just tucked the ball away, then been tackled on the play, the Birds would have punted the ball on the next play and backed the Detroit offense up.  The Eagles defense would not have allowed the Lions to march downfield and kick a field goal.  The Lions had shown all the well designed plays for the Eagles defense in the first half, so the Birds would have won the game with the defense standing strong, if it weren’t for the fumble.  Remember, the Eagles defense surrendered 21 points on three drives in the first half, but they hadn’t allowed a point in the second half, while shutting down the Detroit offense.

The second most important factor in the loss was the fact that the Eagles defense played poorly in the first half.  The Lions had a nice game plan with Golden Tate lining up in the backfield in a Pistol formation and running the ball as a halfback. They featured Theo Riddick in macthups with our linebackers and all the linebackers played especially poor in the first half.  That includes all of them, Nigel Bradham, Mychal Kendrick, Jordan Hicks and Stephen Tulloch.

Bradham played poorly in the first half versus the run.  He was taking himself out of run plays by penetrating through the wrong hole.  A number of times, he’s attacking a gap and the ball is going into another gap.  I don’t know what he was seeing, but he wasn’t reading his keys properly.

Kendricks did a poor job of playing the option route by Theo Riddick at the goalline on the first drive.   He’s got to attack Riddick on the play because he should have detected he was going to run an option route.  Instead Kendricks waited for him in the end zone and Riddick attacked him coming out of the backfield headed upfield.  Once he got Kendricks flatfooted, he planted and went outside for what should the been an easy touchdown catch, but Stafford made a low throw.  Riddick went down and caught the ball.

Hicks was caught out of position and got cut in the open field on the touchdown throw to Theo Riddick.  He’s got to be thinking screen when he’s playing behind a defensive line that’s gaining a strong reputation for rushing the passer.  Matt Stafford faked a screen to his left Golden Tate, which sucked up all the Eagles pursuit, then he flipped the ball to his right to Riddick with a blocker in front of him.   A good linebacker is not supposed to get cut in the open field by a big slow offensive lineman.  Hicks took his eye off the blocker and focused on Riddick and that’s when the blocker cut him.   You’ve got to look at the blocker first, defeat him, then get you eyes on the ball carrier.

On the play, Riddick was tackled just short of the first down marker; but given the first down; then the mark was challenged and overturned; Kendricks and Hicks missed tackles on Riddick which gave him a chance to make the first down. You’ve got to tackle better than that if you’re going to win.

On the last scoring drive by the Lions in the first half, they ran a screen to running back Zach Zenner and Tulloch was blocked easily after seeing them run the screens against the other linebackers. The linebackers have to make plays versus the screens or they’re going to go for big yardage.

The Eagles right cornerback Nolan Carroll played poorly in the first half.  He let Marvin Jones run slant routes on him for big yardage throughout the first half.  He was called for holding on another slant route in the first half.  Ron Brooks was beaten inside by Anquan Boldin and so was Malcolm Jenkins on key third down plays.  If you’re in man-to-man coverages, you can’t get beaten inside.  I know it’s very difficult to stop somebody as strong as Boldin when he wants to go inside, but you can’t give up the inside route on man-to-man coverages.

The Eagles defensive ends lost contain on Stafford with their pass rush and was able to scramble more than ten yards for a first down, then Rodney McLeod hit Stafford in the head and added another 15 yards on top of the run.  It looked like Brandon Graham and Fletcher Cox were running a game, when Cox was supposed to get contain.

Third in the list of factors which cost the Eagles the game was the fact that the officials didn’t have their best day.  On the first play of the game, Connor Barwin was held on a sweep to the right side of the Birds defense.  It wasn’t a difficult call to make because the running back went outside and Barwin was umable to turn toward the ball carrier, which makes the holding call very easy.  Players would say he got mugged because he couldn’t turn toward the play and finished the play on the ground.

On another sweep play to the other side of the defense, Vinny Curry was clearly held as the Lions running back started inside and ran back outside for big yardage.  I know it sounds like I’m crying, but I just looked at the tape this morning and it’s obvious that both of these guys were being held and any decent NFL referee could see it.  Cornerback Leodis McKelvin was caught looking inside on a sweep which got outside.  It was on the same play in which Curry was being held.

These run plays were very important because they got the Lions going.  I wouldn’t have a problem with those calls, if they don’t make a crucial holding call late in the game against the Eagles Brandon Brooks.  He was blocking downfield on a guy, who was not going to make the play.  He had his hands inside the shoulders of the defender, which is supposed to be the key with holding calls.  If it was a hold, it was subtle.  The calls early in the game on the Lions were obvious.  Barwin got tackled all the way to the ground and the hold on Curry was obvious.

The Chop Block call on 5’6″ Darren Sproles was totally ridiculous. He only comes up to the waist of most of the other players.  He can be standing straight up and only be able to hit these guys in the stomach because you have to bend over a bit in order to hit someone which with your helmet or shoulder pads.  This was a terrible call.

I don’t like to cry about referees but they played a big role in the game because the Eagles were penalized 14 times for 111 yards, while the Lions were only penalized two times.

The fourth factor in the loss to the Lions was interception by Carson Wentz, which ended any chance the Birds had to win.  He had about a minute and thirty seconds to march 40 yards downfield to put themselves in position for a field goal.  Wentz should have started the drive with the mentality that he should be patient.  I would have liked to see the Birds run some intermediate routes on the first play to catch the football at least 15 yards downfield.

If there was nothing there on the play, he should have thrown it away. You wind up with it being second down and 10 with five seconds having ticked off the clock.  If you do throw that football out there, you’ve got to throw it up, so the ball is out in front of the receiver, so he can fight for it.

The ball was in back of Nelson Agholor and should have been thrown out in front of him.  Last year in the Buffalo game, Sam Bradford made a great throw to Agholor by throwing him open.  He threw the ball out in front of the receiver and Agholor caught for a touchdown.  By the way, Agholor should have been thinking like a defender once he had trouble picking it up the ball.  If you don’t catch it, you’ve got to make sure the defender doesn’t catch it.

Wentz should have been looking at an incompletion as not a terrible thing, since it would stop the clock and avoid a turnover.  It would be second and ten, if he threw the ball away, which meant three other chances to get ten yards.  You don’t have to take that big of a gamble on first down, when you only need a field goal and you’ve got a minute and thirty seconds to play.

Eagles Defense Didn’t Show Up Until The 2nd Half