Eagles Defense Didn’t Show Up Until The 2nd Half 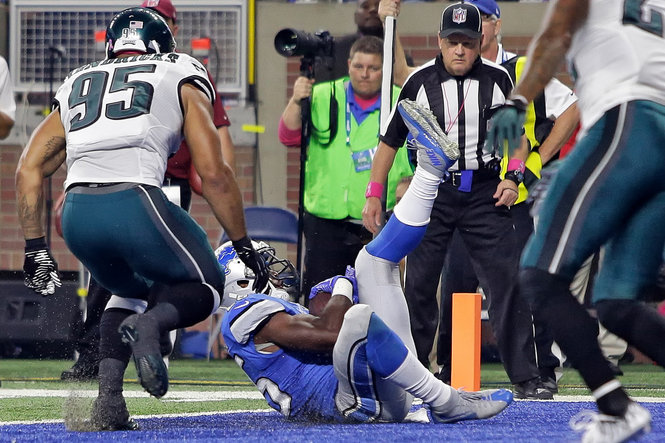 I know it was a tough loss, but this Eagles squad showed me something today by battling back from a 21-7 deficit.  It’s a shame they loss the game because the Birds defense had taken the game over in the second half after getting carved up in the first half.

In the first half, the Eagles defensive front, which includes their defensive line and linebackers just played poorly.  The Lions utilized an extra offensive lineman to take the place of their tight end.  In a lot of ways, it seemed that Detroit utilized some of the same plays and strategy that the Eagles have been using offensively this season.

For instance, because of the injury to Zach Ertz, the Eagles had utilized back up offensive tackle Matt Tobin as their extra tight end.  The Lions put in an extra offensive lineman in the place of the tight end and were able to get outside versus the Birds penetrating defensive line.  I saw the Eagles defensive ends lose contain numerous times against the Lions in run defense and in their pass rush.  It hurt the defense severely.  All the defensive ends, Connor Barwin, Vinny Curry, Brandon Graham and Marcus Smith have got to do a better job of staying disciplined about keeping contain in run defense and with their pass rush.

The linebackers which included middle linebacker Jordan Hicks, Nigel Bradham and Mychal Kendricks did a poor job of getting off blocks and making plays.  Too many times, they were taking themselves out of the play by guessing and not reading the blocking scheme.   Kendricks let Theo Riddick beat him on an option route again for another touchdown.

Kendricks should have realized that Riddick was going to run an option route against him because the running back lined up in the same formation in the same situation they had a year ago on the goalline.  On an option route, the running back can go inside or outside at four to five yards against the linebacker and the quarterback is looking his way.  It has to be quick.

A smart linebacker will attack the running back and jam him, when he detects this route because many times, the linebacker can disrupt the route and force the quarterback to throw the ball elsewhere because he’s not sure the running back is going to be able to recover from the jam.

The Eagles linebackers must always be ready for screens and draws because that’s what offenses are going to run against a hard rushing defensive line.  Too many times in the first half, they were taking too much time to read the play, such as the screens and sweeps.  One screen that went for a touchdown was a play where Matt Stafford faked a screen to his left, then threw the screen back to his right to Theo Riddick, who took it in untouched for a touchdown.  The Eagles defense bit off of the screen fake to the left and never recovered.  That was poor linebacking play.  The Eagles offense have been running that fake screen one way and back to the other all season long.  The Lions saw it and made it their own.

In the second half, the Eagles did a much better job of playing disciplined defense with the linebackers thinking screens and draws and with the defensive line putting heat on the quarterback yet, keeping contain, so Stafford couldn’t escape.  Bradham was especially outstanding in the second half.  He was making plays all over the field and numerous times in the Lions offensive backfield.

Cornerback Nolan Carroll was the target early in the game as the Lions had Marvin Jones run some quick slants against him.  He’s giving up the inside route and you can’t do that in man-to-man coverages.  You have to take away the inside route and make them throw the ball outside.