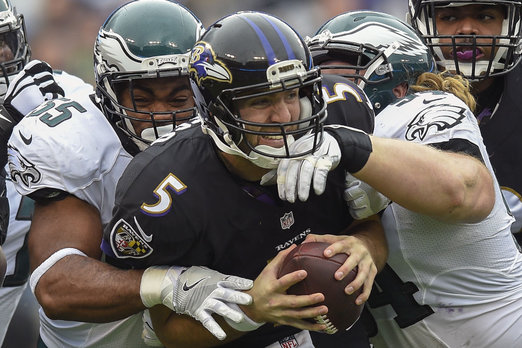 In Philadelphia, a strong effort from a team can make up for an undesirable result. Today, the Eagles, though widely outclassed in terms of talent by the Baltimore Ravens, fought hard through all four quarters in today’s 27-26 loss.

Down by 10 in the fourth quarter with the Ravens threatening to deliver a knockout punch, Jordan Hicks intercepted a pass from Joe Flacco and returned it 38 yards to start the rally. The Eagles’ offense converted the opportunity into three points. The defense pitched a strong three-and-out after the kickoff, giving Carson Wentz and the offense one last chance to tie the game.

Wentz, who struggled early in the game, did well on the team’s final possession, hooking with Zach Ertz on a key completion deep in Baltimore territory, and several plays later made a great move to run in for the touchdown. The Eagles did fail on the two-point conversion, but it was great to see Wentz succeed in guiding a come-from-behind effort on the road against one of the league’s tougher defenses.

Considering what the Eagles were up against, there isn’t really much I have to complain about from this game.

It was a good effort on the road from an overmatched young team. As long as the arrow continues to point up over the next two games, that’s all Eagles fans can hope for as another season winds down.