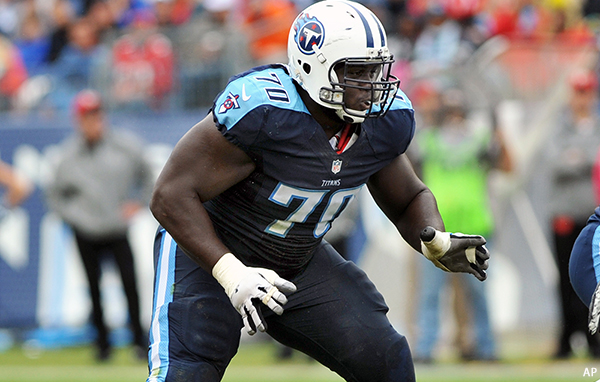 The Eagles have signed former Titans guard Chance Warmack, who is a 2013 first-round draft pick and former player for Birds offensive line coach Jeff Stoutland.  There’s question that Stoutland, who coached Warmack, when both of them were part of the Alabama Crimson Tide, had to vouch for Warmack.

Could this be a signal that Birds center Jason Kelce will be released?  Perhaps because the acquisition of another guard gives the Eagles the freedom to move second-year offensive lineman Isaac Seumalo to center.

that would be my guess, because it looks like they need to find some money somwhere

Kelce has to be moved, Seumalo needs to be on the Field and Starting in 2017.. Warmack not signed to be a Back-Up

Kelce will be gone… A great fifth round pick, good citizen but it’s football bye bye

Can the Eagles get something for Kelce in a trade? Im thinking so

They won’t get a five but if they can get something it’s a plus, sixth or seventh that turns into man 52-53 special teams ace…that’s value

Howie starting to come through. I like the 1 year “prove it” deals that can be extended if the player is able to erase the doubts that clearly existed. Plus we get a little push up the middle with a bigger body in seamalu maybe some mid to late picks for Kelce/kendricks etc? takes away my dissapointment with Torrey smith signing earlier- think I still go offense early in draft and than crush defense in a deep draft

U know Torrey is a one yr deal pretty much to

Yes I am. I just wouldn’t have spent 50cents on him. But seeing the totality of the moves afterwards, I’m at peace with it. BTW of all the people claiming to have “sources” on here, yours was pretty accurate. Keep us posted with any other info he/she passes along.

Lol ilk try man, next thing to watch is Webster from Denver and trading Jordan Matthews in draft

I’m being told via the source, the eagles are still in on Brandin Cooks and are looking to trade for him
(Jordan Matthews may be on his way out)

Also as I mentioned yesterday and day b4, the eagles are still looking to trade for CB Trumaine Johnson

It is funny to me is that just a couple of years ago OL depth was really shaky now all of a sudden we could be trading a pro bowl center because of the log jam and depth under it…. solid OL, better receivers oh and a franchise qb…. this ladies and gentlemen in just a year!

O line is in a weird place IMO with questions every.
brooks is the truth. 1 position solid
peters is a rock but father time is ticking. solid position for this year
lane – wtf is lane? is he legit or a product of juice? can he play without it?
Big V- he ready to replace someone at tackle ?
center – kelce gone? wisnewski blows. can the Samoan handle it?
warmack – been a huge bust, but is a hog, can he bounce back with his old coach?.
somoan – guard or center ? can he play?
barbre – blah

hopefully them 3 can maul and let ur tackles be the rocks. will see

I look at OL as a position where depth is crucial- I’m not down on johnson- i think he’s dumb as a rock but he’s a solid player– the juice he got busted on was no more of a benefit to his strength than apple juice- he was playing really well those first four and then the last couple. V was also good after a rocky start and Somoan got a lot of time.

With the Signing of OL Chance Warmack & Steve Wisnewski, along with Dallas Thomas last month, the Eagles now have 6/7 Players with significant Starting NFL Experience at Guard which is almost unheard of to have on One Team…
Alan Barbre, Brandon Brooks,Chance Warmack, Steve Wisnewski, Dallas Thomas(who started 2 Seasons for the Dolphins in 2014/2015) Bill Tobin and Issac Seumalo have also Started a couple of Games ..

Even at Center the Eagles have Kelce & Wisnewski who have many NFL Starts between them plus Back-up Josh LeRibeus, who was signed back in January and this is not counting the Eagles Draft Picks from Last Season in Issac Seumalo who played Center in College

The Eagles also have Big V and former Defensive Players Tyler Hart competing as Back-up OT’s so there’s a lot of Competition and will very likely be a Trade or Move to free up some of the Log-Jam and create some Cap Space
Are Jason Kelce and Alan Barbre the Players who will be on the Move? Maybe during the Draft Weekend, which would free up about $5.5 Million between them and bring back some Mid/Late Round Draft Picks or be used in a package with one of their own Picks to move up in a Round ..

I wonder if Seumalo may get some serious looks at RT this Summer
He played there 1 Game last Season and the Coach’s were impressed with his movement on the outside.. Could Seumalo become the Future RT and LJ the future LT once Peters Retires?

One thing for sure, the Eagles will have a very competitive Summer Camp along the OL with a lot of flexibility and versatile Players up and down along the O/line which is what you need in today’s NFL when most Teams only Dress 8-9 Players a Game, so having a few OL play Multiple Positions is huge..

So far, a very Nice Off-Season Plan being put together by the Eagles in addressing some of their biggest Needs (WR/OL Depth)
Now Roseman/Johnson and Scouts can address the Defense in the upcoming Draft as the Eagles really need to add 2 CB’s, 1 OLB and 1 along the DL for Depth

Haaa can’t wait to see what shakes out. We got a lot of cap to clear. I can’t believe we getting a wooden nickel for chase daniel so that leaves kendricks. Guess some deals could get reworked. Crazy we are so tight on $ with such little studs.

Think that report said they won’t release him tho. No mention of trade…

Jeffrey guarantee is only $9.5 with 4.5 in incentives… Howie could sell water to a drowning man.
Studs? Well peters, Jenkins, Johnson, Jeffrey and cox are pretty damn good…. Graham is a good DE,e rtz is a good TE…I think we are ok… 3 CB in the draft…. No project types converting from safety etc. CORNERS

Don’t be surprised if Kelce is traded. I think he gets Braford’d if the right deal comes along. I’d be more surprised if he was on the team for 2017 then if he wasn’t. I think what Howie said is strategic gamesmanship to create or increase market value for Kelce for potential suitors.

Having assets at OL is just like having them at QB…. How did that work out

In regards to fortifying the o-line. I think the eagles saw the benefit of a mauling o-line and run game with Dallas last season whereas they could mask any deficiencies of a rookie qb and non-descript defense by running the ball and play-action pass which kept the other offense on the sideline. That is why I feel howie is going to trade Kelce/Daniel/kendricks for mid-level picks so they can take a dynamic RB 1st and still be able to draft multiple cb’s in what is a deep draft for that position. Wouldn’t be shocked if 1, perhaps 2 rookie cb’s were starting next season.